In today's history lesson, a sequel of sorts to last week's Pigeon of the Month episode, our friends from the Tenderloin Geographic Society dive in to the archives to find a classic, yet underrated character in San Francisco's history: newsman-turned-adventurer Admiral Baron Ahab von Muller.

By The Tenderloin Geographic Society:

Allow us to prove a point: petty dalliances concerning marginal histories remain trivial only until the archives prove otherwise. To wit, the strange case of Admiral Baron Ahab von Muller, champion of the pigeon. Cursory searches through the usual channels turned up precious little about the curious eminence. There’s a cast of Emperor Norton to him, what with his costume and elaborate accoutrements, not to mention a devotion to the pigeon population putting him at odds with sanity. Garden variety kook, or “Only in San Francisco” character?

With a little imagination and some research, the outsized appellation proves a nom de guerre for Baron Muller, San Francisco native, pigeon enthusiast, and journalist; that “his man Saturday” is the great Chronicle science reporter George Dusheck settles the issue.

Muller was a reporter of the old cast, having started at The San Francisco News, then the News-Call Bulletin, later purchased by The Examiner. An enterprising city editor got the idea to put Muller in costume and have him attempt to “capture” a young whale that made a wrong turn into the Bay. Adding a pretty girl in a scanty pirate costume (no new memes here) and a bartender (why not?), the party was sent to sea and sell newspapers with their exploits.

Muller was the best kind of journalist - he took his job seriously, but not himself so. And given that he covered some grisly beats in his 42 years, the light touch was necessary.

And so for your enjoyment, enjoy a sampling of what it was to be an ace reporter back in the day; captions come from the news copy that accompanied the photos found in the Main Library’s History Center. Here we find them in pursuit of the deadbeat daddy pigeon whose lady pigeon laid a couple eggs in Judge Preston Devine’s office... 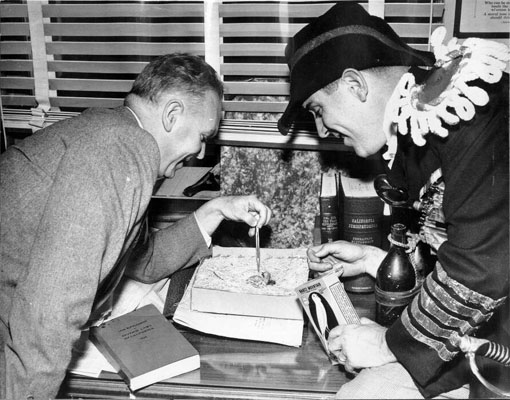 "See these squabs?" Superior Judge Preston Devine asked Captain Ahab Muller. "They've been deserted by their father," he continued as he fed them concentrated drops of legal wisdom, mixed with pigeon-type formula, from an eyedropper. "I want you to search the city, you famous explorer, you, until you bring back the feathered beast who left Habeas and Corpus alone here, with their mother, to face the world." Suzy, the mother, hatched the eggs on Judge Devine's City Hall desk Monday. They're normal, completely so. 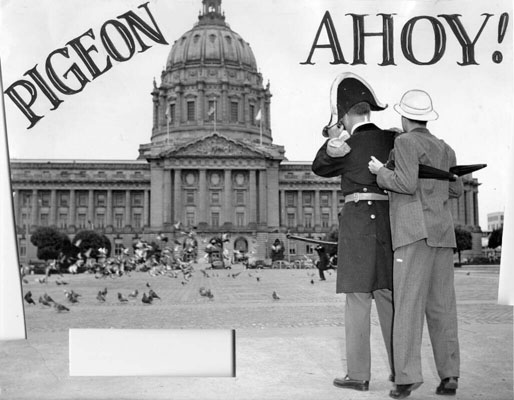 "In the very shadow of City Hall the admiral found what he sought: A flock of hungry birds." 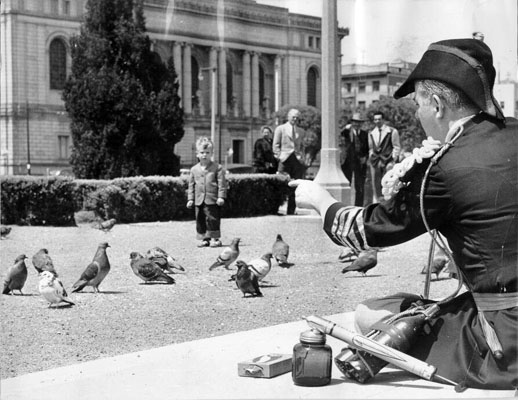 It took Captain Ahab only a few minutes of dodging, and only half a loaf of stale bread, to complete his search. (He didn't really feed the bread to the pigeons, Mayor Robinson. Since it's against the law, he tossed out the bread to this group in a nasty form of bribery, got their stories, then snatched back the bread, crumbs and all, and ate it.) After thorough questioning, Captain Ahab found that Habeas and Corpus' father was an Air Force bombardier, but for daddy's present location, well - you'll just have to read Captain Ahab's own story.

The Tenderloin Geographic Society is San Francisco's home for colloquial cartography and citizenship services since 2006, and amateur ornithology since 2010. If you've missed any of their weekly contributions to SFist, you can catch up here. And don't forget to stay tuned for the Tenderloin Report.