Yesterday's Board of Supervisors meeting wasn't exactly exciting. There was barely any discussion and the supes continue to insist on not throwing chairs at each other. We're beginning to wonder why we thought watching these things was such a good idea in the first place. No matter though, there's always enough polite dissension in the air to overanalyze this stuff. So we soldier on:

Right off the bat the Board was in TCB mode, clearing out items 1-9 without any objections. Congratulations, we've officially declared illegal dumping in District 10 a public nuisance!

On Mark Farrell's West Marina Yacht Harbor renovations resolution, we were all set to hate on the landfill supervisor for getting all jazzed up about boats, but it turns out that won't be necessary. He did utter the dreaded "America's Cup" to describe the urgency of the renovations, but whatever - it's state loans we're accepting for the renovations and he assures us any other costs are paid for with increased boat slip fees. It's "a good deal for us, a bad deal for boat owners," according to the Marina supervisor. We're really enjoying how Mark Farrell couldn't seem to care less about how expensive boat slip fees are, because: Whatever, eff those guys! Those guys are so rich! +1 to Mark Farrell.

Items 12 and 13 passed without objection: Cohen's deal with redeveloping the Sunnydale housing project in to mixed-income housing will be moving forward. Supervisors Wiener and Mirkarimi will be fixing DPW's "Nuisance Enforcement, Abatement and Cost Collection" system, which we assume has something to do with cleaning up graffiti.

On Item 14: Avalos had to go speak out against this liquor license for a CVS in the Richmond. (Which, again, is way out of his district.) He thinks because there's a Fresh & Easy moving in next door that will also be selling booze, he's justified in shooting it down. What he doesn't seem to get is that CVS is open like pretty much all the time. So when we say this liquor license "would serve the public convenience", we really mean "would make it easier to buy booze we don't need at 1:30 in the morning after bars are closing." Will Fresh & Easy be open at 1:30 a.m? Doubtful! To make matters worse Avalos turned it in to a local business issue, which is sort of at odds with his argument about the Fresh & Easy (gasp! a chain!). Now we're all worked up about preserving local business and finding booze and what's this Fresh & Easy? Is it nice inside? And, dammit, now we need a drink. -1 on Avalos for trying to make booze at a CVS such a big problem. They only ever have the crap beer anyway. Actually, you know what? Minus one more. This is booze we're talking about here.

Mar offered a rebuttal. It seemed promising at first because it meant Eric Mar was sticking up for the winos in District 1. In actuality, the liquor license now comes with 13 new conditions and they sound like a total bummer: no forties or tallcans, only "six-packs and up", no smaller bottles of wine, limited hours, etc etc. Apparently only selling cases of beer is a good way to curb underage drinking, but something tells us Eric Mar never actually went to any high school parties. In our day, cases of Natural Light arrived one under each arm as if they were luggage for a transatlantic voyage. Moral of the story: buying booze at this particular CVS is going to suck either way. So we give up: go support your local businesses by buying a drink at the Tee Off around the corner. +1 to Eric Mar for inadvertently stimulating the local dive bar economy.

The final vote was 10-1, with Avalos dissenting (duh).

Items 18-21 - the 1268 Lombard Street project that had the Russian Hill Neighbors all upset was actually resolved outside of the board chambers. The Russian Hill Neighbors reached an agreement with the project sponsor and everyone was suddenly copacetic. Well, everyone except for President Chiu who wanted to remind us that the Russian Hill Neighbors are his neighbors too before moving on and closing the item with a vote. Just when we were so close to getting through this item without wasting everyone's time on dopey comments, Chiu had to go and add a dopey comment. +1 for Farrell, but -1 for Chiu. You've got the gavel, man, you don't need to put your stamp on everything.

During roll call for introductions, Ross spoke first to talk about how great his Town Hall meeting with Temporary Mayor Ed Lee was. Boring!

President Chiu introduced legislation to update zoning controls in his district. The goal, he says is to encourage walking, cycling and public transit in North Beach while ensuring new developments are all well-designed projects. Sure, but will it make people fight less at planning meetings?

Supervisor Kim didn't speak much yesterday, but she did welcome a new Canadian tech incubator to SoMa. Apparently we're just letting Canadians hang out in San Francisco and then take their (presumably profitable) companies home with them now? That somehow seems worse than letting startups pack up and move to Brisbane, but Canadians are friendly people so we'll just do what we always do and forget they're our neighbors anyway. No funny facial tics this week, because it seems she only does that when she's really fired up. But for consistency's sake, here's your moment of Kim: 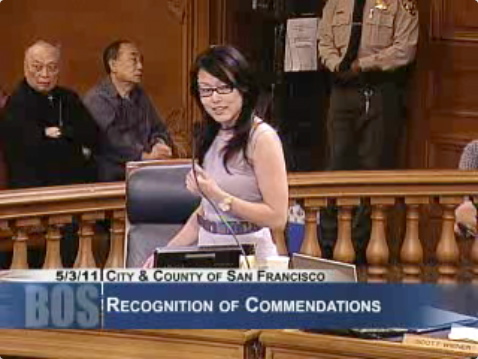 Supervisor Wiener wanted to bring up his well-intentioned land use committee meeting from Monday. So many people showed up to talk about planning and preservation that they had to limit public comment to 1 minute. Someone should hold a hearing about how these committees are SMOTHERING the people's right to 2 minutes of public comment time.

After calling for a hearing on data sharing between SFPD, DPH and SFMTA, Avalos also introduced a resolution to have the City Attorney look in to this lobbying mess around the Stow Lake Boat House issue. Specifically, Avalos wants to know if there's an ethics violation if a city hall staffer recommends a lobbyist. (Hint: there probably is.) Fair enough, +1 to Avalos for calling shenanigans on it.

We've been giving Malia Cohen a little bit of a hard time every week because we'd so very much love to hear he speak up on some important issue to her Bayview constituents. Aside from her special commendation she didn't actually have anything to say yesterday, but she did get some decent work done. In addition to final passage on last week's items, she was also appointed to the Association of Bay Area Governments Executive Board. That sounds important, so we'll award her another +1 for being the quiet yet strong Bayview Supervisor who doesn't make a big deal about herself. What can we say? We've gone soft. Also, this was the guy she honored for Asian/Pacific Islander Heritage Month and he was delightful: 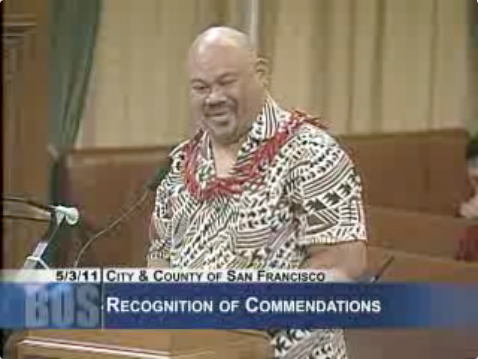 At the end of the day, Mark Farrell got the biggest jump for handling major items outside of the meeting itself and making the meeting that much easier on the SFGovTV watching public, but we're also pretty pleased at what a worker Malia Cohen turned out to be. Someone should pair those two up for a Marina-meets-Bayview buddy cop movie or something.

Horrible Livermore residents against public transportation in their backyard. [CoCo Times] Jennifer Siebel's Miss Representation has the potential to inspire. [Appeal] Willie Brown is rich and powerful. [Inside Scoop] Psst, the Outer Sunset

If you’ve been putting “getting in shape” at the bottom of your to-do list, you may want to reprioritize. At Equinox, you can get fit and rejuvenated with fun, unique group fitness

—
Board of Supervisors Weekly Power Rankings for Wednesday, May 4th 2011
Share this