This week, SFWeekly is pushing Peter Jamison's "Go Fish" profile piece on Kirk Lombard, possibly San Francisco's most popular fisherman. Lombard, who was recently laid off from a post with the Fish and Game Department, has become something of a champion for local sea-foodies, foragers and people who would rather not see the ocean devoid of edible wildlife. If you can get past the "guru" and "foraging" buzzwords on the subhed, the piece is actually a delight, mostly because Lombard himself is such a rich character.

(Full disclosure: This particular SFist editor also profiled Kirk a few months ago for a different publication, so we can happily co-sign on the Weekly's in-depth and admittedly less fluffy piece.)

In music: Ian S. Port turns in a lengthy meditation on Oakland's tUnE-yArDs, a.k.a. Merrill Garbus. Port will help you get over your fear of Garbus' childish formatting decisions, but if you're in to numbers you might want to check Pitchfork's 8.8 Best New Music review of the album "w h o k i l l".

In Film the editorial staff turns in their guide to the San Francisco International Film Festival. Bjork's boyfriend is getting an award. Are you excited yet?

At the Guardian, they've given over the whole issue to the SFIFF. They also want you to know they were named California's Best Weekly Paper by the California Newspaper Publisher's Association. The CNPA must not have seen San Diego Citybeat's recent food issue, because that had one of the finest pieces of irreverent food writing we've ever read.

Back-patting aside, the (award-winning!) Guardian has a piece on flashmob bank protests (boring), a hopeful piece on the Eagle Tavern and a review of neo-speakeasy Wilson & Wilson, but you probably heard about those things on the Internet already and didn't have to wait until Wednesday to read about them.

Still, there's some meat on those weekly bones: Hannah Tepper looks at some realities facing the much-buzzed-about Hayes Valley Farm and Quentin Kopp profiles former top cop/current DA Gascón. You're on your own sorting through their film festival guide, but we'll at least point you in the right direction. 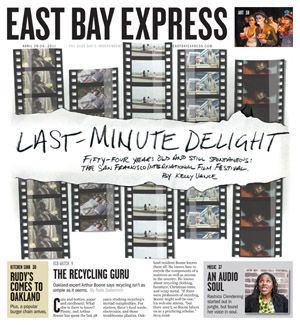 Over in the East Bay, the Express has also devoted their cover to the International Film Festival. Although the SFIFF is not, in fact, in the East Bay, you can still get that slightly-warmer-and-probably-not-so-foggy East Bay take on the festival schedule with Kelly Vance's handy guide.

In investigative journalism, Scott Morris examines the Chauncey Bailey case which currently hinges one whether the shooter was a pawn in a hitjob or whether he was actually trying to prove himself in front of a controversial black Muslim organization.

In Arts & Entertainment, Rachel Swan looks at how comedians deal with hecklers (what? no mention of the "real boobies" incident?) and how an American playwright deals with Checkov. Our favorite Body and Soul column long gone, we get Ellen Cushing's less out-there take on philosophy: she previews Philosophy Talk, which she describes as "Car Talk for the philosophy set." Sounds easy enough.

And finally, fans of Ghost World or heartfelt illustrated works in general will want to pop over for Stefanie Kalem's review of Daniel Clowes' latest work: Mister Wonderful.

Traffic along Third Street at Brannan up to Market is at a standstill this morning. President Barack Obama, who is staying at the Intercontinental Hotel during his visit, made his way to the

Get baked with Obama! [SFBG] World's coolest garage door? You decide. [Curbed] San Franciscan gardeners permitted to sell their crops. [KCBS] Did you know you can put a fishing line down a drainpipe