While we can't make out exactly what these young adults are saying, Domo Logan, friend of former murder suspect Phil Stewart and self-described eyewitness, had a public conversation on his Facebook page about the shooting that took the life of Mechthild Schroer, a German tourist in town celebrating her birthday and wedding anniversary. Logan, it seems, was part of the private party that eventually erupted into gunfire in the city's theater district.

Early Tuesday morning at around 2 a.m., Logan mentioned how, just a few hours earlier, he "saw a female knocked d0wn 2day." Here's how the rest of the conversation went: 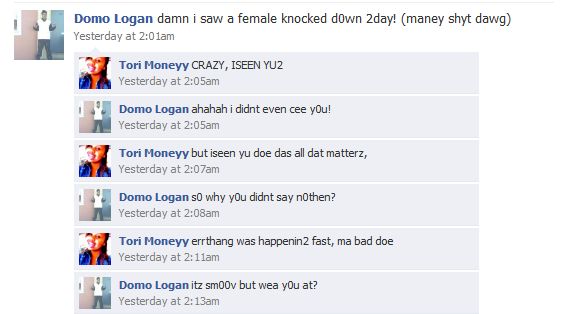 Muni Diaries brings out attention to this nifty bit embroidery. As you can tell, it's a Muni transfer as conceived by Flickr user tweetsweet.

MUSIC: The darling young Yoshida Brothers, masters of the ancient tsugaru-shamisen, reinvent traditional Japanese folk music with the addition of modern pop, rock, and world music sensibilities. The bros. will be at Yoshi's