On Christmas Day, 1894, the first San Francisco Cliff House burned to the ground.

As the Chronicle poetically reported the next morning,

San Francisco's most historic landmark has gone up in flames. The Cliff House is a smouldering ruin, where the silent ghosts of memory hover pale and wan over the blackened embers.

Ah, yes. We discussed this first incarnation of the Cliff House a few weeks ago -- its novel location at the edge of the world, its singular popularity with San Francisco's beautiful people, and its subsequent decline into a house of ill-repute.

Well, before it could rise from that undignified state to the status of a beloved landmark, San Francisco's original "destination resort" needed a white knight to ride to the rescue. That knight would be Mr. Adolph Sutro, who -- in 1881 -- purchased not only the faded Cliff House, but acres of land surrounding it. 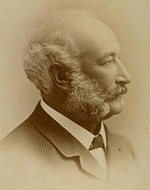 Mining engineer millionaire and future San Francisco mayor, the larger-than-life Sutro had already established a fabulous estate on the heights above the Cliff House, and by the mid-1880s could count 10% of San Francisco as his personal property.

Unlike the robber barons atop Nob Hill, though, Adolph believed in sharing his good fortune. His first order of business upon making acquiring the property was to instruct his architect to turn the Cliff House into a "respectable resort with no bolts on the doors (ahem) or beds in the house."

This was just a small part of Sutro's grand entertain-the-heck-out-of-San-Francisco scheme. The elaborate gardens of his estate were already open to the public, and the soon-to-be-famous Sutro Baths were on the drawing board. His goal was to create a lavish and family safe environment out at Land's End, and that's just how things worked out.

With streetcar lines beginning to move into the brand new Golden Gate Park, and the City's acquisition of the Point Lobos Toll Road (now Geary Boulevard), the western edge of the City was becoming more attractive and accessible, and over the next decade, families did indeed flock to Adolph's resuscitated resort.

Roger Craig was one of the most versatile running backs the NFL has ever seen. A perfect fit for Bill Walsh's short-passing offensive system, in 1985 Craig became the first man to gain

When Joe Montana first came to the 49ers from Notre Dame in 1979, he brought this fanciful Fu Manchu style with him. Of course, everything went up from there. Joe grew into the