Boredoms, from Osaka, Japan, will be playing a very special show at the Fillmore on Tuesday night. They will be performing "In the Round" – one of only four dates that the band will play this way on the eleven city tour this March. Kinda crazy, right? Their experimental/rock/psychedelic sound is definitely as outrageous as their stage show. Don't miss out on this one. 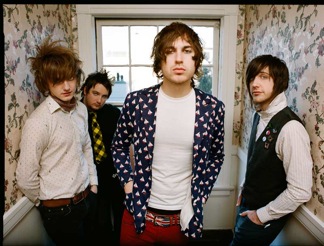 Tuesday, Switches (pictured to the right) will be celebrating their CD release, Lay Down the Law at The Roxy in L.A. They will be in San Francisco, performing at popscene, on Thursday night with The Pigeon Detectives. Switches didn't play San Francisco on their last U.S. tour, so we were extremely happy that they decided to come and visit us on this one. This infectious Brit-Pop band recently had an extremely successful run at SXSW and is releasing their first album tomorrow; the show is gonna be hot!

The weekend is already full of sold-out shows ranging from Vampire Weekend to Explosions in the Sky. Since we already had the opportunity to see Vampire Weekend play (only a couple of months ago), we decided we'll be checking out Sea Wolf supporting Nada Surf at the Fillmore on Saturday night.

Yes, Paris Hilton is a noted admirer of the species -- which then lead to their astounding popularity among Daly City teenage girls, at least according to an unofficial SFist survey conducted at

Photo credit: sfjim123/Flickr Once again this past Saturday, it was Anonymous versus Scientology as people gathered at the SCS headquarters in San Francisco to celebrate L. Ron Hubbard's birthday by protesting the