What with Paris Hilton's release earlier this week and the upcoming celebration of American Independence (sorry, Londonist!), we've been thinking a lot about freedom. Freedom to vote, freedom to choose, and most importantly, freedom to blog. Here are a few things we're happy we've been free to blog about this week.

Bostonist plans to bring the right tunes for a July 4th backyard barbecue. Side one of the Bostonist Chock-Full-o-Freedom Summer Soundtrack comes courtesy of the Ryan Montbleau Band. Side two is a mix from Red Sox pitcher Daisuke Matsuzaka and former Extreme guitarist Nuno Bettencourt. If the barbecue is really ragin', they'll bring new singles from Mitt Romney's dog called "Station Wagon From Hell" and new Celtic Ray Allen's cover of "Age Ain't Nothin' But a Number."

As neither American (they have their own birthday to worry about) nor interested in Paris Hilton in any capacity whatsoever, Torontoist freely covered what it knows best – its local beat. They compared notes on what the city's greatest albums of all time were, watched some sweet-ass rock balancing, and continued covering the sale of one of its favourite CD stores, Sam the Record Man, with a report from its merchandise auction. They freely checked out the smallest bar in town, then told their readers to go beat the shit out of a car. When emergency vehicles were ordered to "Support Our Troops," they debated the issue and watched as a street artist, Posterchild, mocked it (and then re-published his manifesto a few days later).

SFist had freedom to love covered, with coverage of the city's famous annual gay pride parade. And of course, they covered the freedom to rock, with an interview of local American air guitar champion Hot Lixx Houlihan. The commenters were free to complain about the terrible parking situation in San Francisco, in not one, not two, but three posts this week. What San Francisco's not free to do, though? Throw away garbage – the city's taken away over 300 of our city trash cans! 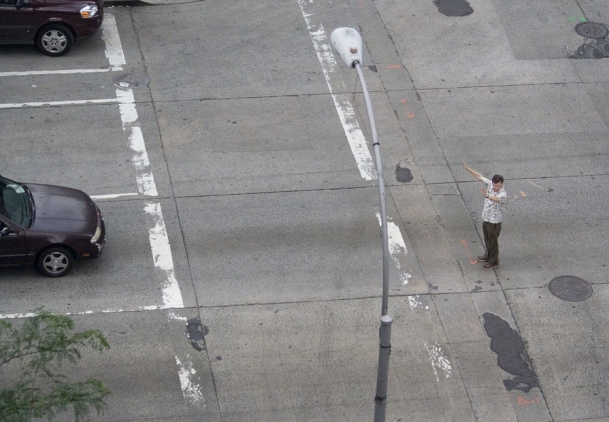 Overseas, Londonist was politely pretending not to be aware of Independence Day, but everyone was keeping busy with a variety of big, outdoor events, all washed out by ceaseless rain, as is traditional for all of London's "summer" shenanigans. As everyone limbered up for a slightly confused Canada Day, the whole of London was suddenly unnerved by a major bomb scare - news still coming in so watch that link. Despite the troubling situation, Londoners are still embracing their freedom and are marching and partying for London Pride, Europe's biggest gay and lesbian festival. And with the famously stoic and bravest of faces only Londoners know how to produce in troubled times, chins are up and voices are soaring for the week-long London-wide Sing London event. Let's hope the stiff upper lips are relaxed a little for the big finale next weekend.

For those who say they don't like LA, filmmaker Werner Herzog says this: "Los Angeles is raw, uncouth, and bizarre, but it's a place of substance." Therefore, LAist has been celebrating film, day by day, this past week by following the Los Angeles Film Festival. (But let's not forget about the erotic stuff, okay?) Angelenos are also savoring their last year of using cell phones while driving – was that why all those UCLA students were running around in their underwear? And with such freedom of mobility in their car culture (okay, the traffic doesn't help much), why not host an art exhibition called The Parking Lot Show?

Summer in the city has been heating up for Gothamist. The Big Apple had a forty-eight-minute blackout that freaked everyone out. Even still, there were people celebrating their freedom to camp out for iPhones, which arrived in NYC with possibly more media and spectators than people on line. A fight broke out between two cozy seafood restaurants over claims of intellectual property theft (the Caesar salad, the wainscotting, and the marble counters, for starters) and some people got upset at vehicles violating no-car rules in a Brooklyn park. Luckily, there is Matt Allen, who has been handing out free frozen treats across the country, and is now in NYC. And the Splasher, the strange figure who's been splashing street art, sent us a 16-page manifesto.

And in Philadelphia, where that whole Fourth of July thing got started, Phillyist was celebrating freedom left and right: freedom to act for twenty-four hours straight, freedom to shop and drink at the same time, freedom to make Seinfeld references and the mayor's freedom to get his iPhone on. They were happy to see their local transit corporation feels free to ask people to keep it quiet, that kittens are free from cheesesteak restaurants, and that The Nightwatchman is still all about a different kind of freedom. On a completely different note, they educated their readers about pulmonary embolism, which took the life of their beloved editor, Star "Sarcasmo" Foster, in December.


Want to know what else is happening across the Ist-a-Verse? Check out this week's favorites on Austinist, Chicagoist, Sampaist, Seattlest, and Shanghaiist.

--A guy jumped onto the field to say hi to Barry Bonds yesterday. Arrested, drunk. [The Chron photo pool, the Snitch.] --They're looking on the Oregon coast now for the missing Alameda County