Seattlest notes the anniversary of the Mount St. Helens eruption, the grounding of a local cruise ship in Alaska and the return of the Blue Angels. Land, sea and air being covered they turn their sites on a nearby resort town and the prickly problem of vague set times at a rock club.

Sampaist had a busy time trying to decide whether to support or not the invasion of the São Paulo University dean's office by the students. Meanwhile, the "1st Whiskey Festival" brought them a very fun Scottish trio playing Brazilian music on the Scottish pipes. Watch
the video! Finally, they were amused to see the first-lady kissing her own hand when meeting the Pope in São Paulo. See the picture.

Like all Brits, Londonist loves two things: cups of tea and their pets. Uber-posh hotel Claridges has the perfect activity – afternoon tea for dogs. Unfortunately, the same place received several tonnes of horse manure from animal rights activists, for serving horse meat. In other dog news, top soccer manager Jose Mourinho almost had his Yorkshire terrier confiscated by police. Back to the rational world, and Londonist interviewed a bunch of urban ironers.

Phillyist discussed how to navigate a breaking circle, how to get happy, how to meet the parents, and how to leave an audience with something to think about.

Houstonist spent the week finding new euphemisms for self-love, considering the merits of slaughtering horses (no, that a euphemism), interviewing DJs and wondering why Houstonians can't handle parallel parking. Fortunately, they always have lovesick haiku to fall back on after a long week ... 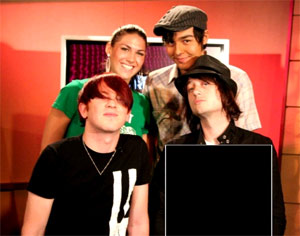 Austinist wonders why a local TV network censored a tasteful nude t-shirt and welcomes the arrival of electric scooters to Texas. Two local scout troops broke the Guinness Book world record for most simultaneous rocket launches, and, not to be one-upped, Austin's historic Paramount Theatre seems hell-bent on setting another record for most classic film screenings in a summer. Austinist chats with The Clientele, and previews an exciting new photography retrospective debuting at the Austin Museum of Art.

Ahh, futility was the theme over at SFist. Their local Survivor contestant, Yau-Man, leaves the island. No good for either side of the bike debate comes from the meltdown Critical Mass had in Berkeley. Some folks want to dance on Falwell's grave; their efforts prove impotent as well. Are you a homeowner in San Francisco? The joke may well be on you. SFist got fussy about a San Diegan's claim of burrito superiority, yet their commentors, shamefully, seem to blow in SD's direction. A pro-war rally(?) involving chimps(!!) proves to be flaccid (small favors). Hopefully SFist's guide to a safe, sane Bay To Breakers will empower their readers to enjoy that event this Sunday!

This week Chicagoist announced their 3rd birthday party plans (awesome), dished about The Loop's party (not awesome), and confessed our undying love for meat and this local meat market. They also discussed the big faux paux on the logo designed by for the Chicago 2016 Olympic bid and whether local girl, Jaslene, was too drag queenish to win America's Next Top Model.

Torontoist had a very musical week: they checked out the Arcade Fire, Amy Winehouse, the Silversun Pickups and Mando Diao. Though they might have the mumps, they're breathing easy over an escape monkey (!!!), gave their readers tips for a healthier BBQ, checked out a massive pillow fight downtown. 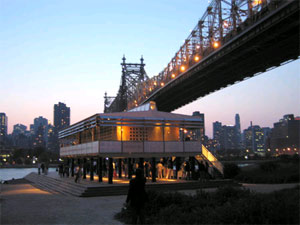 Gothamist wondered if you're ever too old or too stupid to tempt fate by trying to square off against youths convening under scaffolding. But if it ever gets into a fight, Gothamist would like this 11-year-old girl to be on our side, given she defended herself from a kidnapper and even helped capture him! The Big Apple blog also headed to College Point for some well-done burgers from Five Guys, interviewed John Flansburgh from They Might Be Giants, and visited a jewelbox of Modernist architecture under the Queensboro Bridge. And then there are the fears: Too many skyscrapers on the Far West Side and falling through sidewalk grating. At least there are the cool folks auditioning for the chance to perform in the NYC subway system to inspire them.

Shangahaiist ran hot AND cold. An artist caused a stir by living in a glass box in sexy lingerie and crotchless stockings. Shanghaiist also tried to visit Ice World before it melted, debated the chemical nature of maotais and rode the new bullet trains. But above all, Shanghaiist wants the animal torture to STOP.

And this week the best of Boston were making noises in Washington. Bostonist heard about Barney Frank and his arm injury about which he refused to dish details, Jim McGovern is eating for a week on food stamps, and Mitt Romney is still running for President. It almost seems relevant that zombies marched through Cambridge in the same week as cops were practicing their golf swings in Big Dig buildings. And when the rain forces Bostonist to do something other than watch baseball you're going to hear all about how the names of our players are oddly the names of local towns.

Other events: --Bowling for Rhinos! It's like the name of some kind of ska band, but it's actually a benefit for the zoo. $25 gets you two hours of bowling and pizza at

--We feel so bad for the Chron with the layoffs. They try to lift everyone's mood with a zillion articles about animals in today's paper. --Someone's listed a Pinole bridge for sale on