We'll still tune in tonight to on Bravo -- but last week's episode was pretty annoying as far as we were concerned. Is the sheen off the apple, or was this crappy episode just a one-time thing? Gosh, we hope it's just the latter, because we'd like for this to remain our favorite show.

Why were we displeased this show? Guest judge Ming Tsai was kind of a schmuck. Very arrogant; disappointing when contrasted with his rather affable T.V. personality to date. Another thing: Marcel, who we hoped to continue loving to hate, seemed to take a pill. He was humbler. His Jimmy Neutron hair is no fun to make fun of when he's not being obnoxious. Sorta local Michael? Seems too much like Keith from Hell's Kitchen (a.k.a. dumb). As we said last week, seems like they could have done some winnowing of the unappealing and less talented before launching the second season. Oh, and the ridiculous "steal the crate of fruit" melodrama? Handled poorly by everyone. 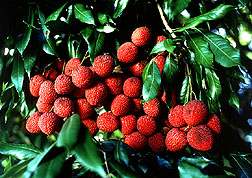 Rant over. Let's start from the beginning.

The Quickfire Challenge, granting immunity from elimination in the next round, was pretty cool. For one thing, the contestants were forced out of bed at the crack of early, 4:30 a.m. The challenge was to create some sushi, and some it was beautiful; some was laughable. That's okay, not everyone has sushi experience. Michael Cliff made a roll that was vibrant and original. Otto started making up for his poor performance from week one by kinda overdoing -- a huge, pretty presentation with a variety of rolls. Less impressive was his self description of being "just a round-eye from Cleveland." Elia, still our favorite, brings some stunning flavor; Ilan, last week's winner, gets some props too from the guest judge Chef Hiroshi Shima.

Michael Cliff wins! Hamma oysters with ginger, soy, mango and jalapeño; also prawns with hamachi, sisho leaf and daikon (no, we couldn't remember these exact details; thanks to Chef Tom's Blog for the 411)..

Comments on the Elimination Challenge, so full of mystery, intrigue, angst, and a whole lotta "blah" after the jump.

Who are you, what do you do, and where do you live? My name is David Kiddoo, and I live in Laurel Heights. I currently work as a project manager for a nonprofit

The site was developed in part to help publicize Impact Theater's next production of Jukebox Stories. But since it's such a cool idea, the site is asking it's readers to send in their