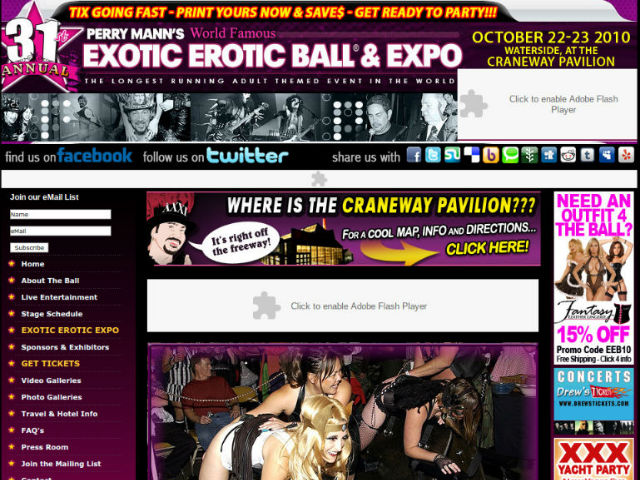 SFist did not receive a reply to our request for comment from Mann, and phone numbers provided by his associates were no longer in service. But we did speak to some of the ball’s previous emcees, organizers, and staff  some of whom Mann fired regularly, only to rehire the next year  about the origins, influence, and eventual wreckage of what had been the longest-running adult-themed event the world (until Folsom Street Fair passed it this year, with its 32nd annual iteration.) 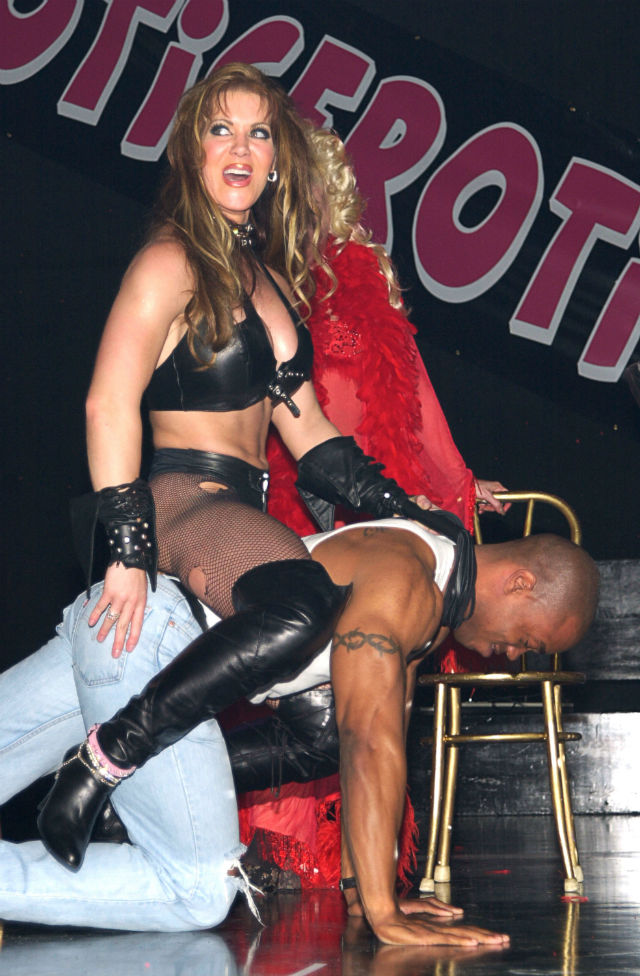 There aren’t many accounts of that 1979 party, but the Chronicle did find one woman who was there and quoted her in a 2004 article. “It was black-tie optional, so people showed up with black ties and that was it,” attendee Susan O’Neil said.

Still, it wasn’t easy being kinky in Ronald Reagan’s America of the early 1980s. “Mardi Gras in New Orleans was one of the only big sexy, creative masquerade events in the U.S.,” said Ev, a stage manager and talent producer with the Ball from 1998 to 2002. “Festival culture had not [yet] existed.”

Still, that wasn’t without risk during this era. The UPI reported a $10 million lawsuit against Penthouse magazine in 1983 by a plaintiff who had been photographed scantily clad at the event, and didn’t know her photos would end up in Penthouse. A judge dismissed that lawsuit.

Adult film legend Nina Hartley recounts her experience of attending during the 80s. “I had gone one time in the late 1980's,” Hartley told SFist. “It was not a fun experience as the suburban boys were very handsy, to say the least. Groping every four steps. My then-partner was a nervous wreck trying to protect me.”

“I felt a hand grabbing my vulva from behind,” she remembers. “I grabbed the hand, bent the wrist and looked the guy in the face. He responded, as I had his hand in mine, ‘It wasn't me!’” 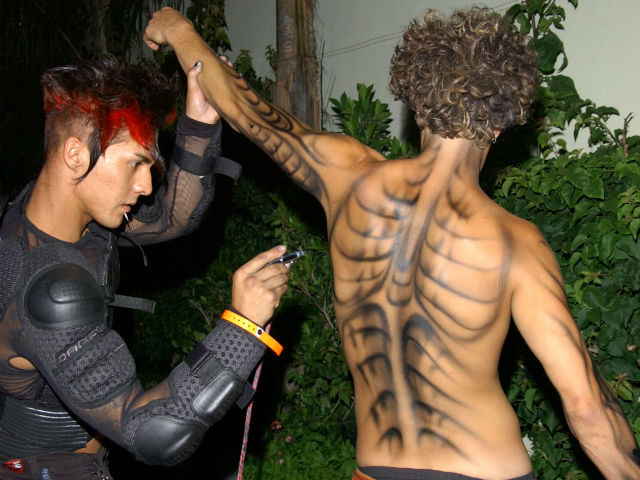 Nina Hartley would return to host stage shows when the event grew even larger and changed location to the Concourse Exhibition Center. “I got the gig as hostess some time in the 90s, which paid money and kept me backstage where the groping didn't happen,” Hartley said.

“Many people had massive amounts of fun at the Ball,” Hartley remembers. “People like putting on costumes and feeling free. When civilians who have not done a lot of personal work on their desires, fears, prejudices, etc., get together incognito and then get high and drunk, shit happens.”

She complains there was “lots of display, but massive amounts of drunken groping, though adds “I’m sure you'll find lots of stories of attendees having the time of their lives.”

By this point, even the 6,800-person capacity of the Concourse was too small for the ball’s swelling, costumed crowds. The event needed a new venue, and organizers wanted to make a splash. But that would mean higher costs and a relaxing of the “everyone in costumes” ethic, which changed the culture of the event.

“The first time that I walked into the ball, there were about 800 people on the floor just going at it, full-on,” Paul Nathan remembers. “You didn’t see that out at the Cow Palace,” 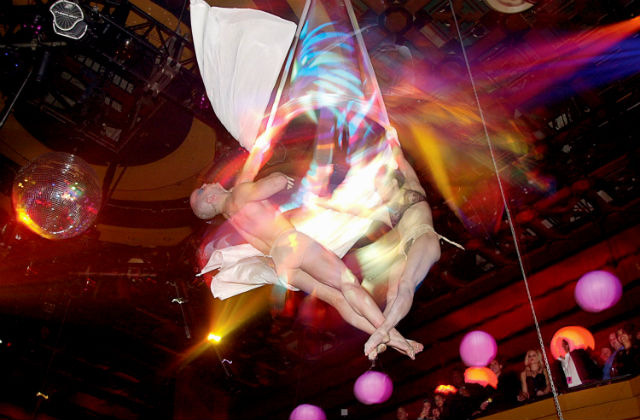 The previous year’s Ball had pulled in $750,000, according to the Silicon Valley Business Journal, and 2001 expected rake even more. But the event’s new Cow Palace incarnation faced an immediate double-shock, with the aftermath of the September 11 attacks and a last-minute bomb scare on the day of the event.

“The country was still reeling from loss on 9/11 just about a month before,” Ev told SFist. “It was a hard call to keep the Ball on or not. We decided that the freedom to love and play was what we were about and that we should go forward.”

“There had been bomb threats,” Ev remembered. “The threat was serious enough that the building had to be locked down and a sweep had to be done. This was about an hour or so before doors [opened], before 20,000 patrons arrived. Everything was fine and it turned out to be false, but it was a heavy feeling.” 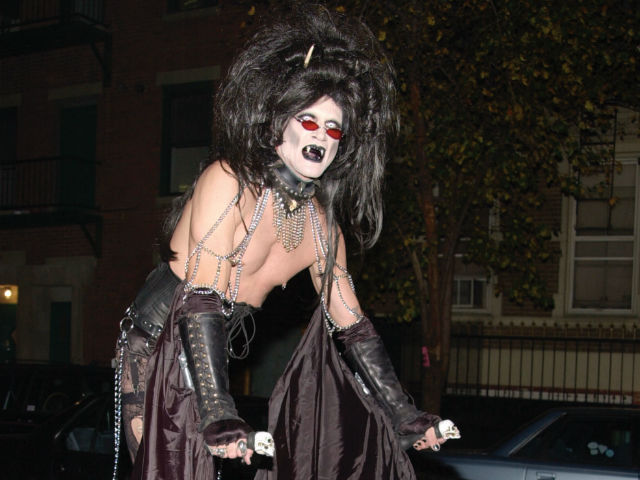 SF Weekly reported that “partygoers were stuck in hour-long lines waiting for spots on grimy sightseeing buses, the limos' replacements. Throughout the night, the transportation situation only got worse. One unlucky reader tells how she crammed onto the upper deck of a bus on the way over, only to be forced to catch a cab home or wait 80 minutes for a shuttle. Another got turned away from AT&T park, was told to drive to Treasure Island, and then had his car broken into.”

The event’s executive producer Howard Mauskopf told the Weekly it was “without doubt the biggest fuck-up in the 29-year history of the ball.” But they were just getting started.

The Ball’s ticket sales cratered in 2009 when the event moved back to the Cow Palace, but organizers bizarrely claimed the Ticketmaster system had been hacked. They alleged they lost $240,000 on this, and the bridge had obviously been burned with the Cow Palace. So organizers went across the bridge for the 2010 event, booking Richmond’s Crane Pavilion, some 20 miles northeast of town.

What guests didn’t know was that Mauskopf had bounced two $5,000 checks to the 2009 headliners, 1980s band Missing Persons. This was becoming a pattern with Mauskopf, one that Paul Nathan experienced personally.

“He’d bounce the check but he’d end up paying me back over the course of the next 6 months or 8 months,” Nathan told SFist. “But he was paying that money off from last year with this year’s ticket revenue as it came in. So by the time you got to this year, all that money was gone.”

“I don’t think he ever had any nefarious intent,” he added. “His intent was to do the best show he could with what he had available to him.”

The Crane Pavilion was booked. Yachts were rented for VIP service. Performers had been scheduled, and service providers were promised advance payments. When those advances weren’t coming through in October 2010, everyone backed out. “The producer did what he could, but by that point vendors in the Bay Area would not extend credit and the event just imploded.” Nathan said. 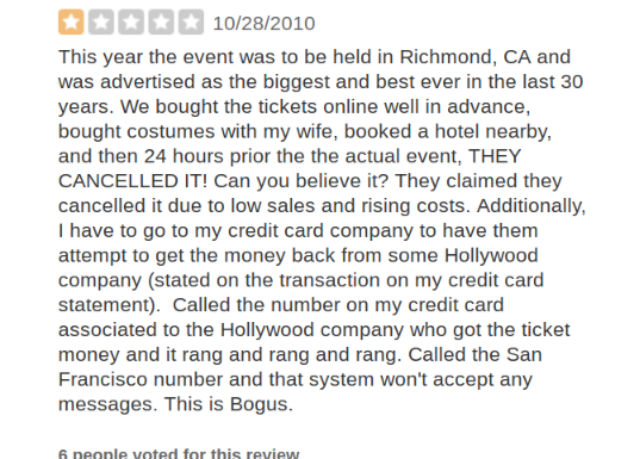 Behind-the-scenes debacles could no longer be contained from public view. The 2010 event was canceled less than 24 hours before it was scheduled to begin. Ticket holders were refunded, but hotel bookings for the Richmond party were not. Spurned guests fumed on social media, but the organizers’ problems were much bigger.

Promoter Howard Mauskopf would face felony theft charges over the 2009 bad checks to Missing Persons. The Examiner reports that Mauskopf was sentenced to 30 days in jail for bouncing those checks and using phony credit cards to finance the band’s hotel stay. He additionally pled no contest to charges of writing $4,500 in bad checks for medical services.

Related: 20 Costumes To Avoid At All Costs This Halloween

We heard the news earlier this month — San Francisco would be installing security cameras in Dolores Park, the popular Mission District hangout that's seen a recent wave of violence. And it appears that

What's got 60 feet and no gas? Muni's new trolley buses, one of which hit the streets of San Francisco this week. This is according to the SFMTA, which on their MovingSF blog