Assuming you will not be helping friends or family pick up the pieces after fires in the North Bay, or volunteering to help evacuees this week, below find some fun activities to take your mind off the chaos that is our current world  and a couple of events directly benefiting fire relief efforts.

DARK ELECTRONICA SHOW: Zola Jesus, a.k.a. Nika Roza Danilova, performs tonight at The Independent, and her electronics-driven music on her new album is described as "heavy, dark, and exploratory." Danilova says she wrote the new album after moving back to the woods in Wisconsin where she was raised, and she writes, "Death, in all of its masks, has been encircling everyone I love, and with it the questions of legacy, worth, and will." Sounds about right for this week. The Independent, 628 Divisadero, doors at 7:30, show at 8 p.m. $20

LGBTQ STORYTELLING: This month's edition of OutLoud Storytelling, the theme is "Bamboozled!" Members of SF's "underground" tell personal stories from their pasts, and this one will feature all tales "about being tricked, duped, and double-crossed!" Storytellers include Lady Bear, Kelly Kittell, and Cissy Fitt, and the evening is hosted by Tommy Salami. Oasis, 298 11th Street, 7:30 p.m. to 9:30 p.m., $10

LAUGHTER YOGA: This free class for all ages and abilities at the UCSF Osher Center for Integrative Medicine will feature deep breathing, stretching, clapping and laughter exercises, all with the goal of increasing blood flow, enhancing endorphins, promoting relaxation, and stimulating immune, digestive and cardiac systems. 1545 Divisadero Street, 5th Floor, Room 523 or 526, 5:30 to 6:30 p.m., free

LOCAL SINGER-SONGWRITER IN INTIMATE SHOW: SF-based singer-songwriter Daimen Seid, who performs with the band Headlandz, has a sound that is equally influenced by American folk, rock, and African music, and he'll be doing an intimate show Wednesday at PianoFight, along with opener Jessie Litwin, who's on tour from Boston. PianoFight, 144 Taylor Street, 9 p.m., $10

A PLAY THAT MOCKS MINDFULNESS RETREATS: The latest new play at ACT's Strand Theater is Small Mouth Sounds, new comedy from Drama Desk Award-winning playwright Bess Wohl that takes a humorous look at the wellness industry and the world of meditation/mindfulness retreats, through the voices of "six wildly disparate urbanites looking for life balance." The Strand, 1127 Market Street, 7:30 p.m., $25 to $55

NIGHTCLUB BENEFIT FOR FIRE VICTIMS: If you want to do some good for relief efforts up north and also do some dancing, you can head to Temple on Thursday and make a donation either here, or at the door. DJs will include Amen, Lazyboy, Primo, Shabazz, and more, and this is part of the clubs Next Level Thursdays series. Temple, 540 Howard Street, 10 p.m., free before 11 p.m., $10 after, with donations at the door

'PATTI CAKE$' AT PROXY: This week, the Proxy Film Festival in Hayes Valley should resume after postponing last week's screening due to the fires up north. And they'll be doing so with the hilarious 2017 Sundance and Cannes festival sensation PATTI CAKE$  described as a "coming-of-age story straight out of Jersey [about] an unlikely rapper finds her voice as a one-of-a-kind hip-hop legend in the making." Proxy, Hayes at Octavia, 7:30 p.m., free

FELIX DA HOUSECAT AT AUDIO: Chicago house DJ and producer Felix Da Housecat will be rocking the house at Audio, and fans of his remixes should be flocking to this party. You can register early to get on the guestlist here, which requires arriving before 11 p.m., otherwise there are presales here, in case it sells out. Audio, 316 11th Street, 10 p.m. to 2 a.m., $10

VINTAGE CAR PICNIC: SF's Old Car Picnic got rained out last year, so cross your fingers for a dry Saturday as it's time for vintage vehicle fans to roll out their own restored beauties, or just come and spectate. There's a $40 entry fee if you're bringing a car (pre-1987 only, $20 for motorcycles), otherwise it's free, and proceeds go to programs that help the disabled. Speedway Meadow, Golden Gate Park, 7 a.m. to 4 p.m., free 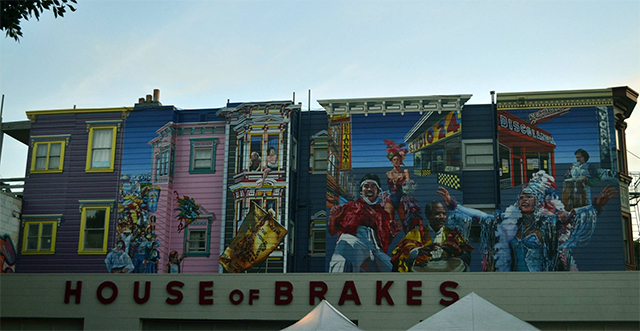 CLARION ALLEY 25th ANNIVERSARY BLOCK PARTY: The Mission will be bumping with celebration on Saturday as the Clarion Alley Mural Project marks its 25th anniversary with a block party. Performers will include Equipto, Stranger Than Fact, The Younger Lovers, and Moira Scar, and there will be plenty of family-friendly fun all day. Clarion Alley, 11 a.m. to 8 p.m., free

PAELLA + OYSTER FEAST FOR FIRE RELIEF: The Absinthe Group is doing their part for fire relief efforts up north with this fundraising event that comes with plenty of food and drink, and live music. The fun happens at Bellota Sunday afternoon, and the banquet will include wood-fired pizza, paella, oysters, special bites from local chefs like Antelmo Faria (Uma Casa), Kim Alter (Nightbird), Rogelio Garcia (The Commissary), and Jason Berthold (Monsieur Benjamin), and plenty of house cocktails. Proceeds will go directly to relief programs. Bellota, 888 Brannan Street, 3 p.m. to 7 p.m., $100 - tickets here

Fire news: The Bear Fire, which broke out late last night in the Santa Cruz mountains, is now over 200 acres and remains just 5 percent contained. [Cal Fire] A brush fire in

The latest reports coming from Cal Fire say that evacuation orders are being lifted in some parts of Sonoma County, including areas south of the Oakmont neighborhood, despite the Oakmont Fire's continued growth