As we wait to learn the exact extent of the damage in the ongoing Tubbs, Atlas, Nuns, and Patrick Fires burning in Sonoma and Napa counties, what is already all but certain is that this will be the greatest combined fire event to impact the Bay Area's winemaking industry in many years, if not ever. The Tubbs Fire, burning in more densely populated Santa Rosa and into Napa County in Calistoga, was the largest of the four as of Monday morning, but by Monday afternoon the Atlas and Nuns fires had reportedly grown to almost the same size, to between 20,000 and 25,000 acres.

Also we are now hearing that at least seven people are dead as a direct result of the Tubbs Fire, according to the Santa Rosa Press-Democrat, via Sherrif's Department Capt. Mark Essick.

The Tubbs Fire claimed the historic Fountaingrove Inn and next-door Fountaingrove Round Barn, as well as the Hilton Sonoma Wine Country hotel, and nearby Willi’s Wine Bar, as the Santa Rosa Press-Democrat reports. The Chronicle reported that despite the loss of the inn, the concierge at the Fountaingrove was still dutifully tending to stranded guests on Monday.

Other fires burning further north in Mendocino have claimed at least one life, and the largest, being called the Redwood Complex Fire, has consumed at least 10,000 acres.

To the south and east, however, the Nuns and Atlas fires appears to have had a far greater impact on vineyards, homes, farms, and ranches in the area.

Earlier we heard via the Chronicle that relatively new and large outdoor cannabis farms dotting Sonoma County were being either threatened or destroyed. Erich Pearson, founder of SPARC who has two medical dispensaries in San Francisco and a barely nine-month-old farm near Glen Ellen said on social media that he was staying on the farm, and it was unclear how much damage had reached the latest crop, which was set to be harvested on Tuesday  the extent of the damage there remains unclear. The California Growers Association reported via their weekly call with growers that six of their 18 "regional leaders" were either being evacuated or helping neighbors who were. 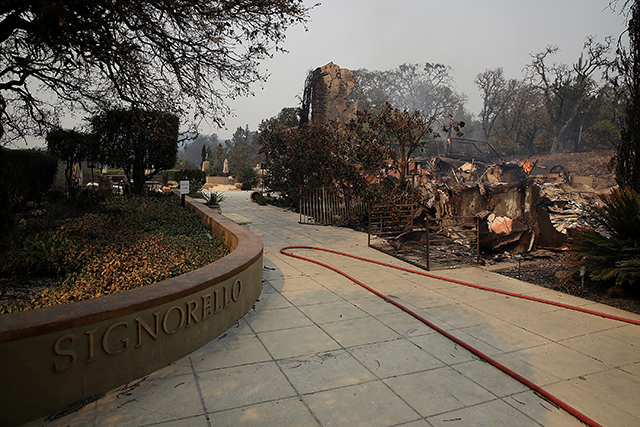 Vineyards, wineries, and homeowners are likely to sustain the greatest economic impact, with tasting rooms, farms, and many other structures either burned or under threat.

The Chronicle reports from Napa that buildings at Stag's Leap winery have been destroyed, as has the entirety of Signorello Estate winery, on the Silverado Trail, and Mead Ranch on Atlas Peak. Also, Nicholson Ranch in Sonoma is reportedly destroyed. The Press-Democrat adds to that list Paradise Ridge Winery, and reports on social media suggests that other wineries along Highway 12 in the area of Glen Ellen are being impacted as well, including Imagery and B.R. Cohn, though the extent of the damage remains unclear.

Per the Chron, Scribe Winery in Sonoma was reportedly safe as of Monday afternoon, as was most of St. Francis Winery. Because so many vintners and winery workers have been evacuated, we still can not know the state of things on the ground.

Grape harvest primarily takes place in August and September, however some grape varietals continue ripening into October and November. As Quartz notes, a single acre of grape vines can cost tens of thousands of dollars to replace.

The remains of the fire damaged Signorello Estate winery after an out of control wildfire moved through the area on October 9, 2017 in Napa, California. (Getty Images)

The death toll in what continues to be a group of disconnected, simultaneous wildfires in multiple counties stands at 10 as of late Monday afternoon, though that number is likely to rise homes

A CBS reporter is walking back some comments he made about Colin Kaepernick, correcting a prior report where he said Kaepernick would stand for the national anthem. Appearing on The NFL Today, Jason