As the 40th anniversary of Harvey Milk's election to the Board of Supervisors approaches next month, local nonprofit Illuminate  the folks behind the Bay Lights on the Bay Bridge and the Summer of Love projections at the Conservatory of Flowers  is commemorating the historic event with two installations at the former Bank of America building (now SoulCycle) facing Harvey Milk Plaza in the Castro. First, a temporary set of rainbow beacons called "Harvey's Halo" shooting directly up to the sky from the roof of the building will be unveiled on the evening of November 8, marking 40 years since Milk's November 8, 1977 election as the first openly gay elected official in the country. Second, a set of words in white neon that will be permanently featured on the facade of the building, just below the cornice where the Bank of America sign once was (see below), is being installed and they will read "Hope will never be silent"  a famous quote from Milk.

The 15 rainbow beacons, shown above, will only remain on for seven nights beginning November 8, but Illuminate's executive director, Ben Davis, tells the Chronicle that the neon words will remain indefinitely as a "permanent greeting" to everyone arriving in the Castro.

"The art is designed to honor the life and legacy of Harvey Milk through light’s power of attraction," Davis said in a statement.

A crowdfunding campaign to fund the two pieces has so far raised about half of its $60,000 goal.

These works arrive just as a design is being chosen for a complete redo of Harvey Milk Plaza, which currently just consists of the sunken entryway to the Castro Muni station. In two of the finalist designs, the Muni entrance is moved up Market Street in order to create a larger street-level plaza.

See more about Illuminate's installations and Milk's legacy in the brief video below. 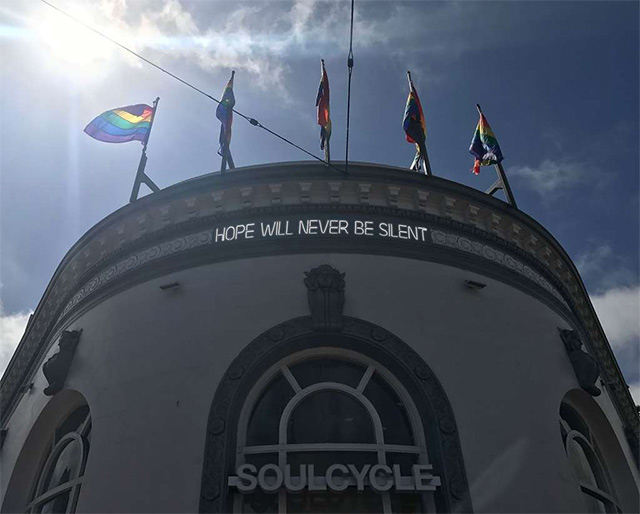 If you were looking to score some high-end weed chocolates at Westfield mall, I'm sorry to say that you're going to have to search elsewhere; Défoncé's brick-and-mortar store just got nixed. On Thursday,

SF Symphony Resident Conductor Christian Reif. Photo by Terrence McCarthy/SF Symphony. To coincide with the last day of Oktoberfest in Munich, the SF Symphony hosts on Tuesday its own version of the