Maybe you became aware of cult-favorite, proto-punk garage rock band the Seeds because of the Ramones 1993 cover of their hit “I Can’t Seem to Make You Mine.” Or maybe it was because of the Bangles’ 2000 cover of “Pushin’ Too Hard,” or Garbage, or Alex Chilton, or Yo La Tengo and Jon Spencer’s respective covers of “I Can’t Seem to Make You Mine.” Or maybe you heard heard that track as the background music in Episode 1 of Netflix’s Stranger Things in the scene entitled “Hopper arrives at work; talks with staff,” or maybe you discovered The Seeds through the 2014 documentary The Seeds: Pushin’ Too Hard in which Iggy Pop’s engagingly gushing compliments to the band can be seen in the trailer below.

Or maybe you’re an aging punk rocker who actually lived through the iconic Los Angeles sextet’s heyday. However it is you founds these Seeds, the band is back together  well, its surviving members, at least  for a blockbuster reunion show at the DNA Lounge Friday night. SFist caught up with The Seeds as we prepare to get our ribs bruised and our glasses smashed in the mosh pit of that show.

“We wanted to not be like anybody else,” Seeds drummer Don Boomer said of the band’s late 60s commercial peak. “That was a time of Frankie Avalon, Bobby Rydell ‘Teen Idol’ stuff. We didn’t want to be like that.” 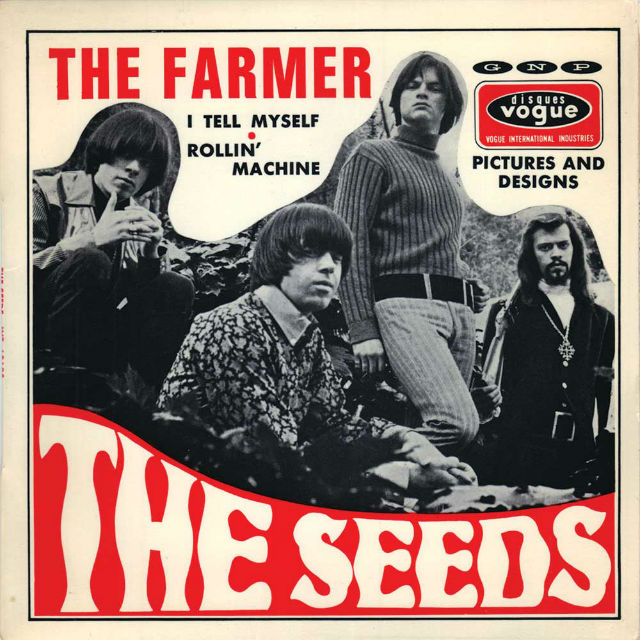 What The Seeds were like was a huge influence on the next several generations of punk, pop, and superfuzz bigmuff grunge rock enthusiasts. While The Seeds were mostly a California phenomenon in their time, their sound germinated its way into the works of everyone from the Beach Boys to the Smashing Pumpkins. “Eddie Van Halen said that ‘Pushin’ Too Hard’ was the first guitar solo he ever learned,” Boomer told SFist.

According to Wikipedia, the Seeds are also credited with coining the term “Flower Power”. Boomer clarifies this is not technically true.

“There was this group of girls that always came to our shows, and they always brought flowers and sat on the stage,” he recalled. “Some of the DJs in Los Angeles started hearing about that, and they were the ones that really pushed it on us, But we were forever known as the band with ‘Flower Power’. Once it started, it never stopped.”

The Seeds were flower-powered by the charisma of vocalist Sky Saxon, a workhorse frontman right up until his 2009 death from renal failure. “Billy Corrigan had been working with Sky right before Sky died to produce some new record,” Hooper told SFist. “Sky was the only one of us that kept playing all the time. He played the night before he died. You can’t be any better than that. That’s a good way to go out, playing all the way to the end.”

The Seeds today, image via the Seeds

So you won’t see Sky Saxon at Friday’s show, but you will see the closest incarnation possible to, say, a Seeds show at the Pasadena Civic Center in 1968. “The 60s are embedded in our DNA. We can’t not do that,” Hooper said. “It feels the same to us when we do those songs. When we get up and play, nothing’s changed. When we play, we’re back to being 20 again  though we got a few more wrinkles.”

“Unfortunately, it can’t be all the original guys. It is what it is,” he continued. “But the music is still the original music. You’re gonna hear that music. We’re not using a bunch of electronics or stuff that people use now. We’re making an authentic 60s show. Because people have heard those songs on records for 50 years, they still play them on the radio and they use them in commercials and movies. People know the songs. But if you’re not 65 or 70 years old, you never got a chance to see us live. Well, we’re gonna do a Seeds show.”

That show is Friday night at the DNA Lounge, whose goth, punk spirit makes it an ideal venue to see the Seeds. “We’re gonna be packed in there,” Boomer says. “And that’s great. We’re used to having the audience very, very close to us. That’s really our element, to have tiny shows with the audience packed right close up. So make sure your deoderant’s working, I guess.”

The Seeds play Friday, September 15 at the DNA Lounge (375 11th Street, at Harrison Street) with the Cellar Doors and Isaac Rother and the Phantoms. Tickets here.

Image via the Seeds

There were reports of shots fired on Market Street between Sixth and Seventh Streets around 3 p.m. Thursday, and the subsequent police activity caused a traffic jam as the entire block was

True to form, Berkeley's City Council meeting on Tuesday night included some lengthy public debate about an issue that's not exactly vital city governance at the moment, and ultimately devolved into some yelling