The endless drama unfolding over at Uber might as well be programmed by Bravo TV. Here's the latest:

In the lawsuit filed against Uber by Waymo, we get a look at a bunch of bro-texts between embattled former Uber CEO Travis Kalanick and Anthony Levandowski. Levandowski is the former Uber engineer at the heart of Waymo's suit which alleges that he took thousands of files from Waymo to help build Uber’s Lidar sensors. (Catch up on that right here.)

As Spectrum reports, the text messages don't so much implicate Levandowski and Kalanick so much as they demonstrate how stressed Uber execs were (are) about the company's self-driving technology. For its part, Waymo claims there must be missing texts because Kalanick and Levandowski's back-and-forth contains "significant and inexplicable gaps."

You know what else they contain?

"I am at the secret side door, no rush"

"You hungry? .. Can get some Uber Eats steak and eggs."

"Wanna come over and spoon, watch CHiPs, and feed each other frosting?"

"We're going to take over the world"

"Down to hang this eve and mastermind some shit"

Okay, I made one of those up but I bet you can't guess which one.

Meanwhile, Recode has the news that after two years at Uber, Chris Saad, a product manager of Uber’s developer platform is departing  basically because he can't imagine an Uber without Kalanick.

Saad has been wallowing over Kalanick's forced resignation over on his Facebook page, stating "Travis embodied (and in some cases taught) me these things. There wasn't a moment or a minuscule detail that he noticed that he didn't immediately spring into action to help me solve - with that wry smile and enthusiastic glint in his eye. The cost of losing him as Uber's CEO will be incalculable." 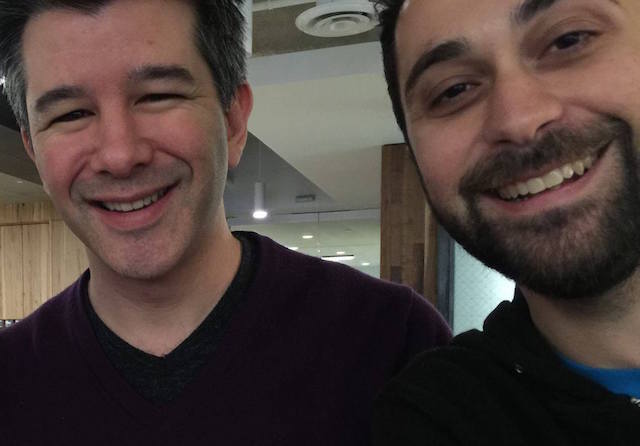 This was posted along with the emoji update that Saad was "feeling pained (frowny face)" and includes a pic of the two former work buds, eye-glint included.

According to Recode, there's tension among Uber employees who feel they have no leader and several, on both sides of the Kalanick departure, are considering options outside the company. A new CEO is expected to be announced next month. It will probably not be Kalanick, who, if you'll recall, really wants his job back, and one board member/investor is suing to make sure that doesn't happen.

Finally, Uber's biggest competitor Lyft appears to be kicking some ass thanks to Uber's non-stop bad press. As Inc. explains:

Despite its demure reputation, Lyft is aggressively capitalizing on the opportunity to grow at Uber's expense  and spending less doing it. A source who worked on Lyft's promotional efforts told Inc. that Lyft has been progressively reducing its marketing since fall 2016 as Uber's troubles have increased. The source, who requested anonymity due to an NDA, said that Lyft has been scaling back its partnerships with external promoters as well as reducing the financial incentives for new users to sign up. Uber's troubles and Lyft's growing public profile are apparently providing more than enough incentive for consumers to switch.

A Lyft spokesperson told Inc. that Lyft tripled growth in 2016, already added 150 new cities just this year alone, and already given more rides in 2017 than they did in the entire 2016.

In terms of app downloads in the first quarter of this year, Uber grew by a modest 25%. Lyft's increase? 115%. Historically, Uber has bested Lyft's downloads with percentages in the double digits. For example, in 2015 Uber had 225% more downloads than Lyft. In 2017, that number has shrunk to 70%. Which is to say, in the rideshare race, Uber's losing its lead.

A man who was allegedly attempting to rob a Church Street home found himself in an uncomfortable position Tuesday, when a resident caught him in her kitchen window. According to the San Francisco

California lawmakers are calling on the National Park Service to rescind a permit they've issued for a gathering of alt-right figures, conservatives, and likely white nationalists at Crissy Field next weekend. The event,