It's the 10th annual outing for Outside Lands this weekend, the sprawling SF music festival in Golden Gate Park that draws around 200,000 people over the course of three days, many of them traveling from Oregon, Canada and elsewhere just to have a Coachella-style good time in some decidedly un-Coachella-like weather.

The first Outside Lands, which was a pretty instant success drawing 40,000 to 60,000 people each day, was in August of 2008, and every August since the fest has put on three consecutive days of very diverse musical acts and comedy, accompanied by a Bay Area-style cornucopia of upscale food options, wine, beer, and in more recent years, cocktails.

Check out the individual day line-ups here, and for the first time in several years, the festival hasn't sold out as of the week-of, and there are still single-day tickets available for Friday and Sunday, but three-day passes did just sell out in the last 24 hours.

Below, a checklist of tips from someone who's been to every one of the last nine Outside Lands (me), which should help you get the most of what can be an overwhelming (and dusty) experience.

1. Be Decisive, Set Priority Shows, and Stick To Them
Like Coachella, this is a festival with five music stages (plus a much smaller dance tent sponsored by Heineken), but unlike Coachella the stages are in some cases even farther apart from each other. Navigating through crowds, taking a bathroom break, and trekking from the main stage (the Lands End stage on the Polo Field) to the Twin Peak Stage (Hellman Hollow) can take 15 to 20 minutes, and very often set times will overlap on these two stages where the majority of bigger acts will be performing. And if you're the kind of fan that needs to be down front, you may need to position yourself near there at the end of the previous set in order to stake your claim, meaning you need to schedule a half-hour window at least before an act that you definitely want to be down front for (the Outside Lands app helps for scheduling, but the alerts can get annoying). If you have VIP, this problem is a little less urgent because both of these stage have VIP corrals on one side near the front. Suffice it to say, if you have anything resembling diverse taste, you're likely going to have to miss some things in order to better enjoy some other things  and you're going to have a way better time if you're not running trying to catch 15 minutes of this or that.

2. Get There For Some of the Smaller, Earlier Sets
After saying all of the above, I should note that music lovers should try to catch the earlier acts, especially on Saturday and Sunday, as the festival-going hordes start to wear out and decide to show up after 5 for the headliners only. The festival grounds  especially the Wine Lands tent, and Beer Lands  are worlds more civilized and fun when you aren't fighting for space with 80,000 other people, and there are rarely any acts who aren't worth seeing at this fest  again, if you've got varied taste.

3. The Comedy Shows Require Advance Planning, And Commitment
Comedians don't really want people milling around and coming in and out when they're on stage, so if you want to get into The Barbary tent (which this year is way up near the box office, in Marx Meadow) for any specific act like Nick Kroll, Jeff Goldblum, or Henry Rollins, expect to have to claim a spot in line about 45 minutes to an hour ahead of showtime. Seating is limited, and you're not going to get in unless you commit to doing this, or unless it's one of the lesser known acts. 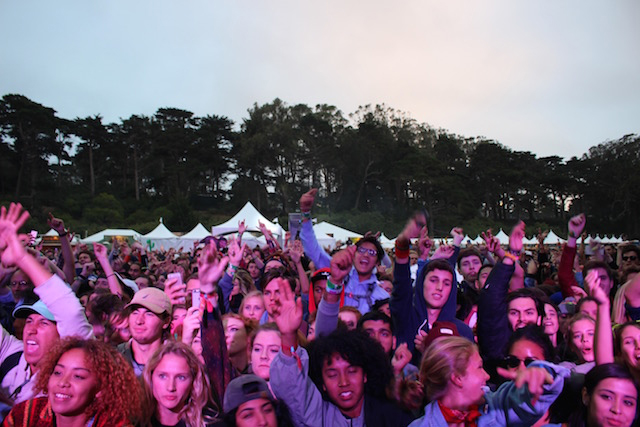 4. Layer Up  For Real
I haven't been to a single Outside Lands that didn't turn freezing, almost every night, after 7 p.m. And there's typically only ever one sunny day on this particular second weekend in August  the Weather Channel is showing partial sun Friday and Saturday which means there could be a few warm hours, likely after 3 p.m., and then windy on Sunday. There will inevitably be a cadre of shivering 22-year-olds in Coachella-esque tights and crop-tops, and you can laugh at them as you pull on your parka. If you don't want to carry a coat around all day, there are storage lockers for rent at the far end of the Polo Field.

5. Make Time To Eat Before The Prime Dinner Hour
The best of what there is to eat  and there's quite a lot of it  is going to attract a long line, and some vendors are more efficient than others at handling these lines. Your best bet is to plan for late lunch or early dinner, in an effort to avoid the 6-8 p.m. window when everyone is starving and/or getting too drunk. Top picks: 4505 cheesburgers, Itani Ramen, Little Skillet fried chicken, Senor Sisig burritos, Rich Table's porcini doughnuts, and Del Popolo's wood-fired pizzas  they've been doing this fest for years and they've got it down to a science, slinging excellent, fresh-out-of-the-oven pizzas in about 8-10 minutes even when the line is long.

6. Check Out the GastroMagic Stage
One of the funnier, odder quirks of this festival is the GastroMagic stage, which dates back just a couple of years, and which generally features pretty small-scale demos and performances (including the now annual Big Freedia's Bouncin' for Beignets, shown above). The events are usually chefs paired with musicians, and includes some big names this year including Roy Choi, Action Bronson, and pizza guru Chris Bianco. Also, Jarobi White of A Tribe Called Quest will be enjoying some "ham and eggs" with SF chef Chris Cosentino and the Jazz Mafia. 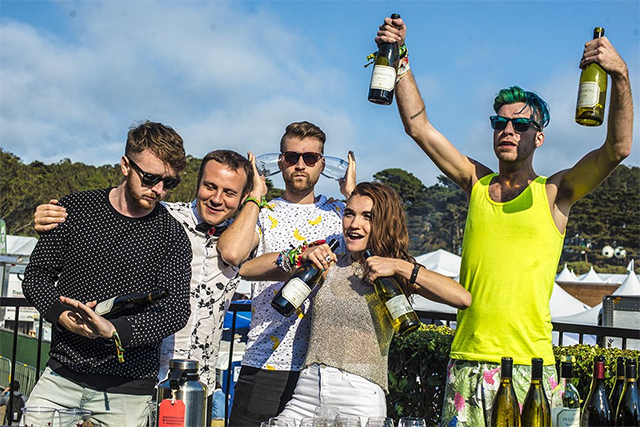 7. Try the Cocktails, Beer, and Wine, But Be Prepared To Pay
Obviously it's no secret that all the drinks at a music festival are pricey. Outside Lands novices may be duped into thinking that everything is cheaper on the main festival grounds on the Polo Field, where they're mostly just serving Heineken and bad wine, but really there's very little price differential between that and the offerings at Beer Lands and Wine Lands, so you may as well drink the good stuff  tiny tastes of wine are going to run you $3 to $5 however, and double-pours can run you $18 to $20, so be prepared. The CocktailMagic area, new as of last year, features semi-pre-mixed drinks (last year they were $14) from top-notch area bars like The Alembic (they've got two this year, The Dandy with Hendricks Gin, watermelon, lime juice and fresh basil; and the Brown Wolf with Larceny Bourbon, St. George Spiced Pear Liquor, Nocino (walnut liquor), grapefruit bitters, Mexican mole bitters, and Amaro Lucano). They'll shake them up fresh for you, and it's usually worth the trip rather than paying almost the same price for less interesting, pre-batched drinks from a tap.

8. For God's Sake Don't Drive, Or Uber
Seriously, there are several very easy ways to get in and out of Golden Gate Park on days and nights when you and 60,000-80,000 other people are trying to do the same, and none of them involve cars. Past years have included tales of surprise $400 Uber bills due to the crazy amount of traffic that invades this usually sleepy part of town, and there is very little street parking to be had anywhere near the park in the Avenues. Your best bet (besides a bicycle!) for getting to the park and quickly back to Civic Center after the shows are over are the Muni shuttle buses that leave regularly from Civic Center during the afternoons, and line up along Fulton Street at the end of the evening (at which point they're free). The other option, especially if you're trying to get to the Mission or Castro, is to walk a few blocks south out of the park and hop the N-Judah, and take a car from Duboce. Yes, the trains will be full, so it's not a bad idea especially if you're leaving at the same time as everyone else (after the last act) to walk toward the ocean and try to be one of the first people on the trains, which terminate there. Nobody ever promised this wouldn't be a schlep, but this is a situation where cars are not wise. IMPORTANT: Heading to the fest, stay on the Fulton bus until 30th Avenue if you want to do the least walking, though they may force you off sooner if traffic gets too intense. The VIP entrance is another couple blocks further down toward the water.

9. Bring a Picnic Blanket and Your Own Water/Soda
They're going to check you for glass and/or booze of any kind, but snacks, cans of soda, and sealed water bottles (two up to a liter each) are totally cool to bring in, and this will save you some money. No framed backpacks, though, and no totems made of wood or metal. There are storage lockers for rent, but they tend to fill up and sell out on the early side.

10. By Day Three, Expect to Get Dusty
This may not be the desert, but the dirt paths through the woods kick up a lot of fine sand and dust (these used to be sand dunes, FYI), and the grass gets very worn out by the end of this festival. Bandanas and even goggles aren't a terrible idea if you want to get really Burning Man about this and keep the dust out of your eyes and mouth, especially if you plan on doing a lot of trekking between stages.

All that said, have fun everybody!

All earlier Outside Lands coverage on SFist.

This week, a literary magazine is putting out stories using Google AdWords, so you may see short stories that are not trying to sell you anything popping up in Google searches. [AdWeek] There

We knew as of January 2016 that the owner of The Gangway, the oldest continually operating gay bar in the city, at 841 Larkin Street in the 'Loin, was looking to sell the

—
Never Been To Outside Lands? 10 Important Tips For Getting The Most Out Of SF's Big Music Fest
Share this