SFist’s stance on deplorable teens is well-documented, so we were naturally intrigued to see a new Macbeth send-up that uses inadequately monitored teenagers as symbols of bloodthirsty ambition. MacBitch, playing through August 19 at the Exit Theatre, is a “Frankenplay” that mashes up the seemingly incompatible genres of a Shakespeare palace-intrigue tragedy and a Mean Girls/Heathers-style teen-girl black comedy. Director Ariel Craft, whose recent work The Awakening made the Chronicle’s Top 10 Theater Picks for 2016, creates an all-woman Macbeth reboot that is manic and gruesome, but still a satisfying stab at combining teen comedy and Shakespearean tragedy.

Unlike Mean Girls and Heathers, MacBitch features adult actors mimicking teenage girls with a “we lived through this” sensibility that is unafraid to go full slapstick. Macbeth’s archetypes are mixed with stereotypical teen movie tropes, and the script shifts gears between plainspoken contemporary dialogue and classic poetic verse. Many of the modern updates to the source material are clever gifts that keep giving, like the three witches’ use of "cootie catcher" paper fortune tellers as black-magic talismans, or John Carpenter-inspired visual tricks employed in scene transitions.

In the Macbeth role of “Maxine,” we have Lauren Hayes, who has done legit Shakespeare before (San Francisco Shakespeare Festival’s Hamlet, 2015) and it really shows. She’s got a technical talent for delivering iambic pentameter credibly to the modern ear, and her comfort with both highbrow and lowbrow elements keeps this curious mashup afloat when it’s not sure which genre to be or not to be. A grisly body count does indeed accumulate in several scenes that are difficult to watch, but Rebecca Hodges (“Seymour”) does some uproarious, heavy comic lifting that takes off much of the edge. 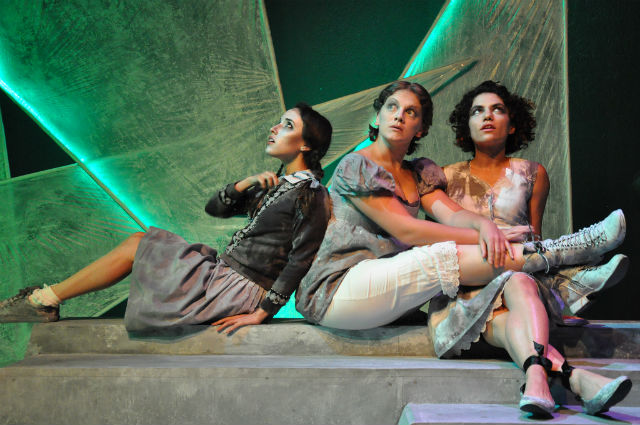 Sketch comedy excess sometimes gets the upper hand in this production, but the hypnotic, almost-constant presence of the three witches onstage keeps MacBitch consistent with Macbeth’s dramatic, psychological roots. These goth witches are mesmerizingly choreographed, and beautiful, horrible monsters you cannot take your eyes off of.

Strict originalist Shakespeare fans may find this zany update to be “not Shakespeare enough.” There are Madonna lyrics interspersed into the Bard’s text. Some of the parody points  like a crude gag on the “washing hands” allegory that I thought was genius  require a certain emotionally arrested, Beavis and Butthead sense of humor to fully enjoy. That won’t appeal to the sensibilities of all Shakespeare people. But if you’re four paragraphs deep into a theatrical review of a teeny-bopper Shakespeare parody, there’s an awfully good chance that MacBitch would appeal to you.

MacBitch’s run coincides with our summer of teen mob attacks on BART, but that’s a Medium thinkpiece for another day. If you’re up for a bawdy but very smart comedic Shakespeare adaptation, the Exit Theatre is the damned spot to be out at for the next two weekends.

MacBitch plays through August 19 at the Exit Theatre. Tickets here.

Today we're kicking off a new feature called "Still Good," focusing on Bay Area restaurants that have been open a few years, or a few decades, and therefore may not have been garnering

There's a house full of cryptocurrency gurus in San Francisco, and it's like a modern-day commune from CNBC. A group of cryptocurrency entrepreneurs and enthusiasts live inside a three-story home in Potrero Hill