Maybe you felt a little safer with yesterday's news that the sinking Millennium Tower could withstand an 8.0 magnitude earthquake. But perhaps the more relevant question is ‘Can the building I live in withstand an 8.0 magnitude earthquake?’ And a surprising number of San Francisco structures still cannot. Despite earthquake-shaming them with signs posted by the Department of Building Inspection (DBI), the mandatory retrofitting of soft-story buildings (buildings with garages or open spaces on the ground floor and housing units above, the type deemed “most likely to collapse” in case of an earthquake), the San Francisco Examiner reports that nearly 1,500 soft story buildings have yet to even submit permits for earthquake retrofit work, let alone start the work itself. The deadline for submitting permits is Sept. 15, as mandated by the DBI.

First, let’s cut right to the chase  do you live in one of these still-not-retrofitted, soft-story buildings? The Department of Building Inspection has an interactive map of soft-story properties color-coded by their work or permit status, and a list of soft story properties and their current work completed or permit application status, as we learned back in October when 60 percent of soft story buildings were not in compliance. 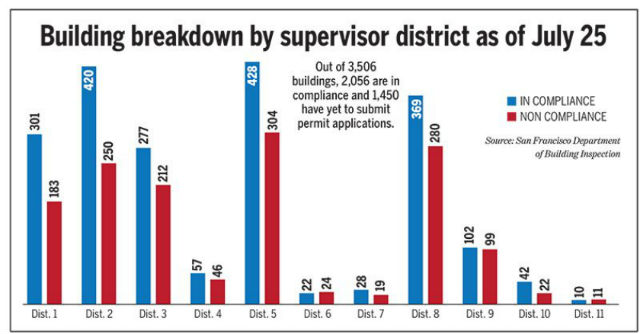 Now that we’ve got you either relieved or having an anxiety attack, let’s take a look at where in San Francisco we find the largest numbers of story buildings not yet seismically retrofitted. Unsurprisingly, the largest numbers of out-of-compliance soft-story structures are found in the neighborhoods that have the most soft-story structures. That means very few issues in South of Market, the Sunset, and the Excelsior, but many out-of-compliance buildings in the Marina, Noe Valley, and the Castro. The Western Addition’s District 5 has the most soft story buildings not up to code with 304 properties with permits outstanding, and many residents likely unaware of their building’s status.

“We are heavily involved in the outreach program right now,” said DBI director Tom Hui told the Building Inspection Commission at a July meeting. “Right now, we have 1,500 not complying yet, that’s why we need to do a big push. Otherwise, the code enforcement will be a nightmare for us.”

It’s not just a nightmare for the Department of Building Inspection, but also for the homeowners. Retrofit work runs anywhere between $50,000 and $200,000, with absolutely no financial upside. Landlords are permitted to pass the costs onto their tenants, but this cost has to be amortized out over a 20-year period. Many elderly and fixed-income homeowners have had to sell their properties because they can’t afford the retrofit costs. And even among owners who can afford the costs, it’s the kind work where most owners have no way to determine whether the contractor has actually performed the work properly.

“We know there is some sloppy and inadequate work being done  that’s a fact  but we do not have a complete understanding of how pervasive the problems are, or of where they initiate,” structural engineer David Bonowitz told the Examiner. “Are the problems we’ve seen one in 1,000? Or one in 10? Are they from specific contractors or inspectors, or are they more randomly distributed?”

DBI deputy director of inspection Ed Sweeney says he’s had senior staff double-check these retrofits, and does not feel quality of work is an issue. Instead, he’s worried about a lack of qualified contractors in the Bay Area. “I don’t think there’s enough engineers or contractors to meet this deadline,” Sweeney told the Examiner. “That’s my opinion.”

Related: We Are Still Due For A Big Earthquake On The Hayward Fault

No afterparty is complete without @stephencurry30 randomly rolling in asking to party.. A post shared by Jim Marrinan (@jimboslice401) on Jul 31, 2017 at 6:31am PDT It's the off-season for the Warriors,

There are a ton of shiny, happy San Francisco events to take advantage of this weekend. Our carefully curated selection includes activities for animal lovers, film fans, and classy art types. Behold this