The drama surrounding the Oroville Dam and its currently under-construction spillway is likely to continue well past this year. And a new, scathing report from a retired Berkeley engineering professor suggests that state officials are not only to blame for the near catastrophe that happened there in February, but they're also to blame for ignoring or trying to explain away a potentially disastrous problem with the dam itself  which is the tallest in the nation.

A 15-member team at UC Berkeley, through the university's Center for Catastrophic Risk Management, issued the report earlier this month, and one of the team leads, professor emeritus Robert Bea, tells SFGate that the state Department of Water Resources (DWR) has been disingenuous in their public lack of concern over some patches of green vegetation that have appeared partway down the earthen dam which could be signs of slow water seepage that could lead to the dam's ultimate failure.

According to the report, "Oroville Dam may be facing a breach danger from a serious and a dangerous form of a slow motion failure mode of the left abutment of the dam."

The green spots, which the report points out have appeared in both rainy and drought years, are the result of a "natural spring" according to the DWR. But why, then, did the DWR conduct some sort of drill test near the green spots in 2016 if they aren't concerned about them. 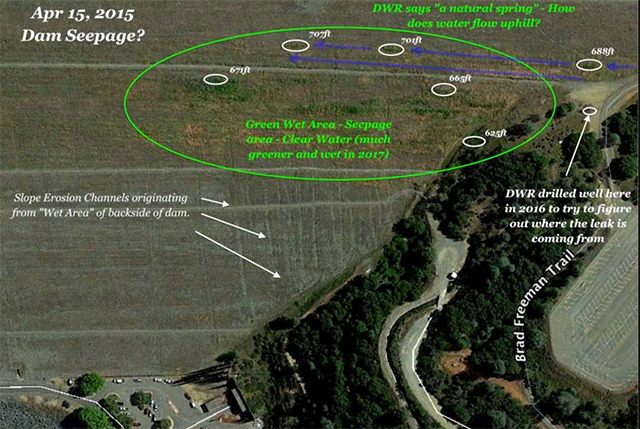 "Do not try to ignore persistent 'wet spots' in the nation's tallest embankment dam," Bea said to SFGate. "Do not try to explain them away using 'trite explanations' like 'all dams have leaks' or 'it is a natural spring.' This dam is an extremely important part of our California water supply infrastructure system. If this dam failed catastrophically during high water in the reservoir, there would be significant deaths and injuries, loss of property and productivity, and damage to the environment."

The DWR responded when the report was released saying to the Chronicle that it was welcome and "additional analyses and studies and will ensure this report is shared with the forensic team." To Bea's claims about the green spots they tell SFGate this week, "These green spots were first noticed just after construction of the dam when there wasn't even water in the reservoir. The preliminary finding from DWR's inspections and studies show that this is an area that collects water from rainfall causing vegetation to grow."

Construction crews are at work on fixing the heavily damaged spillway at Lake Oroville in order to make it operational before winter rains begin again. The UC Berkeley report went further to suggest that the spillway was "managed to failure," and that cracks that ultimately led to the large eroded gashes that rendered the spillway nearly unusable this past winter were first observed in inspections in 2009 and were not properly dealt with. Bea and the report's co-author Tony Johnson blamed the DWR for "long-term continued use of these inappropriate standards, guidelines, procedures and processes" in managing the 49-year-old dam.

Nothing says summer like a gathering of good friends around a grill -- and we've rounded up all the things you need to make sure you throw the barbecue of the season. Whether

The business of mastication had some bright spots this week, with more details about Stonestown's depressing Macy's becoming a food/cinema destination, more news about the Mid-Market hotel with a rooftop bar and