One thing that San Francisco is most known for is its timeless and gorgeous historic architecture. The Victorian/Edwardian aesthetic that pervades our fair city, with its bay windows, decorative cornices, and detailed appliqués is what seduced many of us to move to the Bay Area, and what inspires so many tourists to still snap pictures of "Painted Ladies." But future generations will no doubt hate us for the boxy and Esprit-colored condominium detritus with which the most recent tech boom blighted our cityscape  if any of these ticky-tacky atrocities even last a generation, that is, given how little interest developers seem to have in spending money on good architects. I've picked out a few of the current most hideous condo complexes, but rest assured there are even uglier ones in the Planning Commission pipeline.

NOTE: This list only includes condominiums. Many of you rightfully despise structures like NEMA and 38 Dolores, but these are luxury apartment complexes, not condos. This list contains only condominiums, though mixed-use condos are also included. Also, these opinions reflect those only of the author of this article. 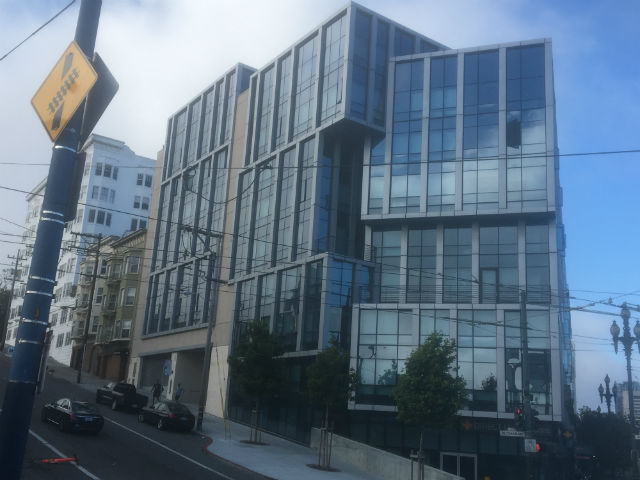 Linea
No matter how good a mood I’m in, this compositionally unsettling Safeway Heights condo automatically renders me hopeless and depressed. An aggressive and angular attempt at Modernism, the big glass collection of cubes makes no attempt at harmony. And those cantilevers announce to the neighborhood that they can’t wait to fall on you.
8 Buchanan Street, between Sanchez Street and Noe Street 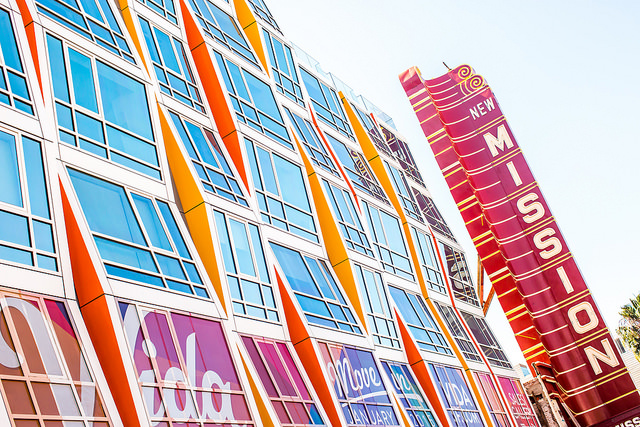 VIDA
It looks like the earthquake already hit at The Joker’s hideout known as VIDA, whose form was dubbed “Gangnam style, swagger style” by the Planning Commission’s Kathrin Moore. These disorganized zigzag boxes are detailed with a red and yellow color scheme that seems like a rich white designer’s attempt to convey a Latino feel in homage to those being displaced. This may explain why vandals just can’t resist the place with their “Die slow, rich f**ks” graffiti.
2558 Mission, between 21st Street and 22nd Street 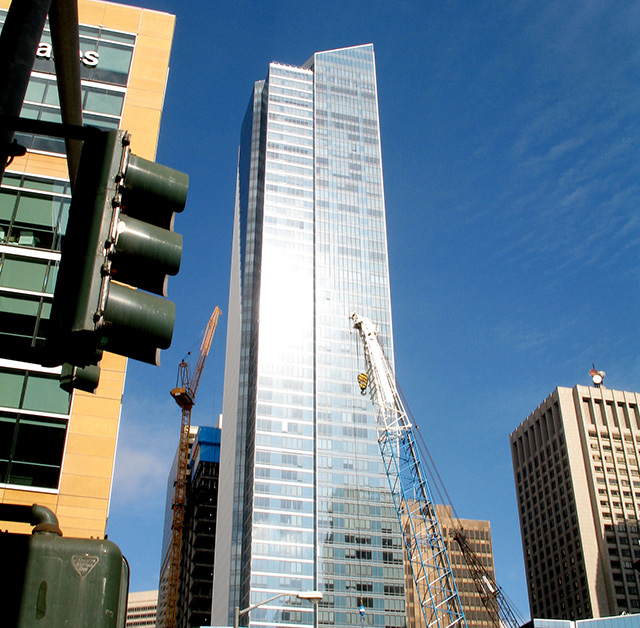 Millennium Tower
How can we not include the infamously sinking Millennium Tower, whose unsold units and endless lawsuits will make it the butt of jokes for years to come. But let us also rag on its boring, fortress-like proportions that only a Cylon would love to call home. It’s hilarious to think that back in 2012, this sinking stinker made Worth magazine’s World’s Top 10 Residences list.
310 Mission Street, between Beale Street and Fremont Street 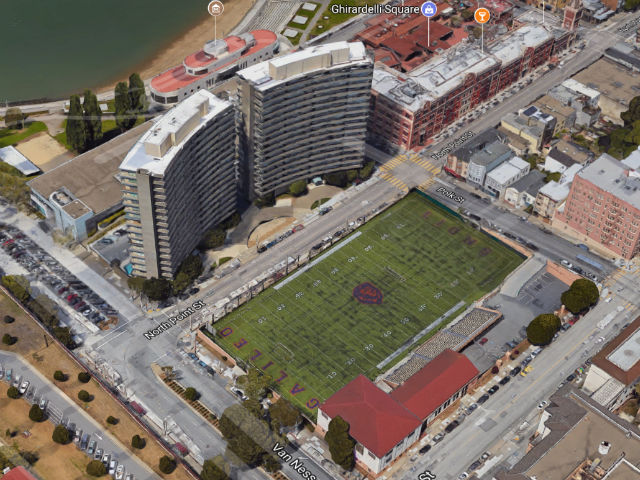 Fontana Towers
We direct much of our fire here at the new generation of condos, but these two abominations have been ruining San Francisco views for 55 years. There is somehow no 1960s fun in these monoliths from the 1960s, and not a single interesting material anywhere on the facade. But it’s more the beauty they block than their own inherent ugliness that makes the Fontana Towers reliably among the most reliably irritating eyesores on the skyline  and this development just about single-handedly launched a generation of protesters screaming "No Wall on the Waterfront," by the way.
1000 North Point Street, between Polk Street and Van Ness Street 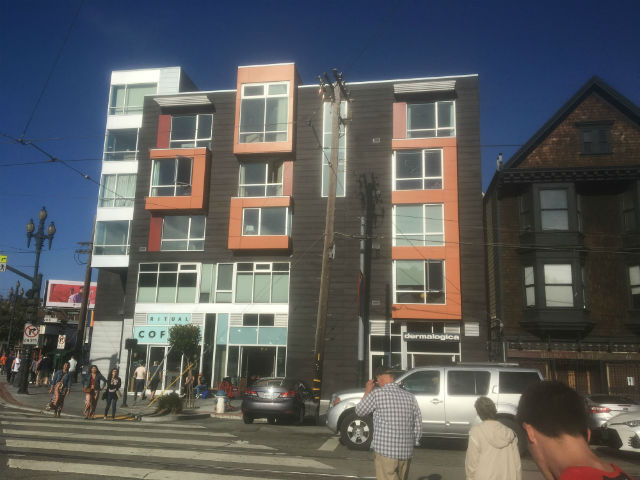 Icon SF
Hey, I’m all for combining different materials to get a nice exterior effect. But this awkward, colorblock monstrosity at Noe Street and 16th Street is a mashup of three different incompatible design ideas that just don’t speak the same architectural language. Adding to the total lack of focus, we have jutty, Tetris-like elements that make the facade more busy and not at all cute.
2299 Market Street, between 16th Street and 17th Street 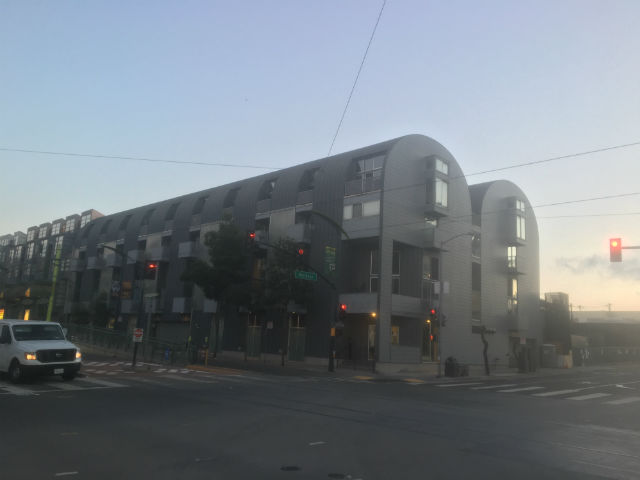 2002 Third Street
There’s plenty of Stanlingrad chic to hate upon out at Mission Bay, but this grain silo concept is particularly bleak. Yes, I’m aware this work was designed by Stanley Saitowitz, who has done remarkable work all over town. But the bunker mentality of these structures just isn’t pleasant, and feels like in this case Saitowitz got conned by a particularly aggressive aluminum siding salesman.
2002 Third Street, between Mariposa Street and 18th Street 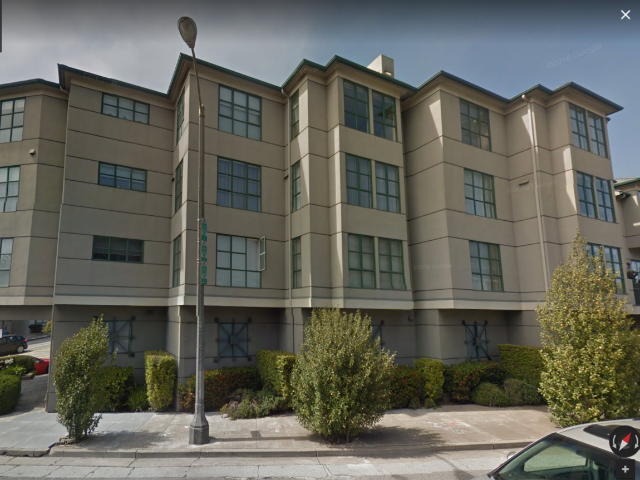 298 Portola
I’m forever enchanted with the kitschy, old-school motor lodge aesthetic of houses in the Twin Peaks neighborhood. But here we have this completely out-of-scale 80s McMansion that spreads a county jail vibe across an entire huge block of Portola Street. Puke-green bars cover the ground floor windows with ugly asterisks to further add to the overall unwelcomingess.
298 Portola Street, between Clipper Street and Burnett Avenue 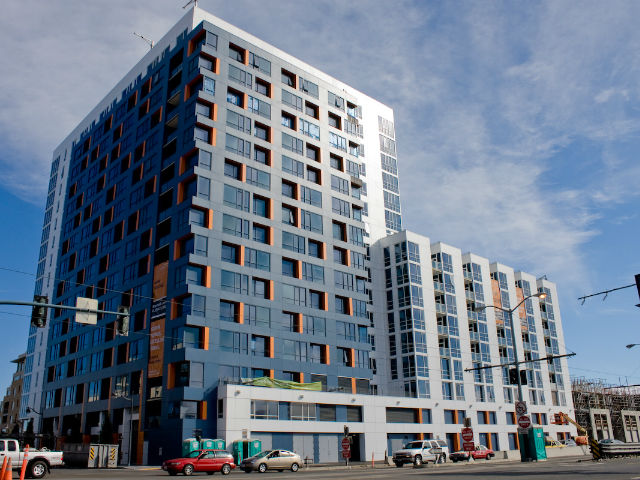 Arterra
What in the Hello Fresh is going on with the Atari 2600 graphics that adorn of the exterior of this Mission Bay collection of slabs? There is all manner of fug going up near the 4th Street and King Street Caltrain station and the ballpark these days, but the inconsistently arranged shower of little orange lasers makes this structure really stand out. Further, it comes across as three differently sized and shaped buildings that were crunched together and just can't find their proper harmony.
300 Berry Street, between 5th Street and the 280 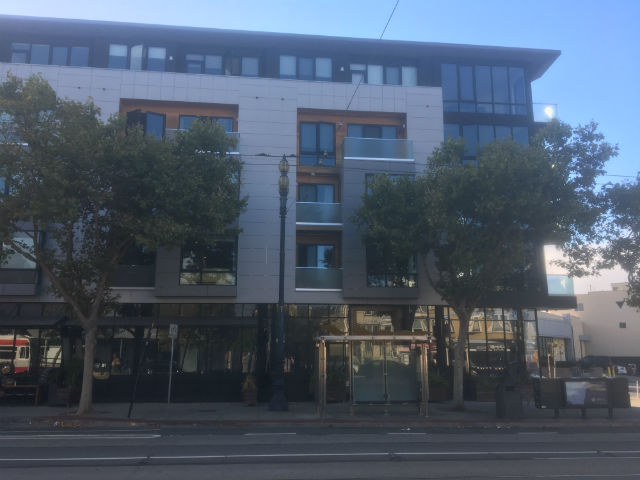 The Century
Visually uninviting and inhumane, The Century makes Market street a lot less pleasant with drab gray paneling and ground-level reflective glass. Those balconies appear too small to be usable, and this building will age even less well than most of the unremovable architectural horrors on Market Street. Because peep those drainhole circles near the parapet, they’ll only get uglier over time as water stains accumulate.
2200 Market, between Sanchez Street and Noe Street 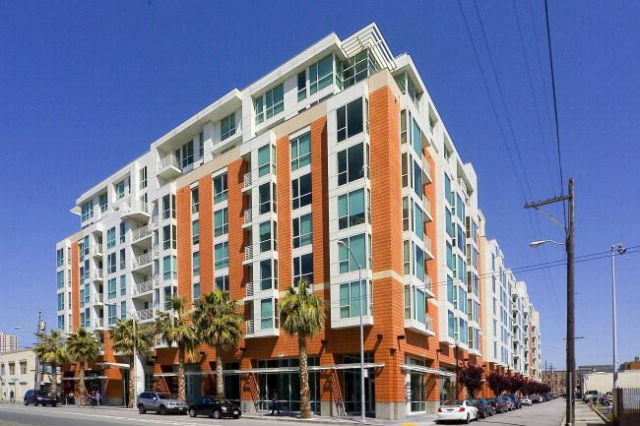 The Palms
Completely overwhelming and incongruous with its surroundings, The Palms is sort of a Walmart attempt at an Art Deco scheme. I’ve seen airport hotels that were more inspired than this, and it hulks over the neighborhood in a way that’s pretentiously out of scale. Just to drive home its ethic of excess, The Palms once offered a studio with 116 parking spaces.
555 4th Street, between Bryant Street and Brannan Street

Are Apple's CEO Tim Cook and America's CEO Donald Trump best buds? Trump is sure making it sound that way (despite some photographic evidence that would suggest otherwise). In a recent 45-minute interview

—
The 10 Ugliest Condo Buildings In San Francisco
Share this