Culture is king queen this week with an extraordinary bevy of really special events, from a benefit performance of Ragtime to a celebration of black women as God to glowing pianos under Golden Gate Park's night sky - that you can actually play.

THE RIOT IN COMPTON'S CAFETERIA: Tonight is the second-ever reading of scenes from a new play about a vital piece of Tenderloin history, The Compton's Cafeteria Riot. The brand new play is based on the events surrounding the country's first-ever anti-police riot by the LGBTQ community - a riot that pre-dates Stonewall. Conceived by Mark Nassar and Tenderloin Museum director Katie Conry, the play was inspired by the Tenderloin Museum's exhibits on the subject and it's being workshopped (now!) with input from the public. Play Workshop, Tenderloin Museum, 398 Eddy St, 6:30 p.m., free.

SWING IN THE SQUARE: Take advantage of this gorgeous weather and check out The B-Stars, "one of the Bay Area’s best roots bands, swingin' jumpin' rockin' 1930s thru 1950s tunes." The SF-based band will be performing for all of Union Square tomorrow evening, and Jeff Kroll will be offering (mostly tourists, we're guessing) a dance lesson at 7 p.m. Union Square Live, 333 Post Street, 6 p.m. to 8 p.m., free.

DAVID GERARD: Magician and mindreader (bear with me, here) David Gerard is back with "Signs," his new show written just for PianoFight audiences that is presumably not about the M. Night Shayamalan movie of the same name. The oddly adorable Gerard rarely performs for the general public (but he's a major hit at corporate events, apparently) and he might actually be able to read minds. I'm super curious about this, are you? PianoFight, 144 Taylor Street. 7:30 to 9 p.m., $25, ages 10-and-up.

LOCAL LEADERS MEET AND GREET: Are you a woman considering a run for office? Here's an opportunity to meet and engage with women who have. The Women's Committee of the United Democratic Club will host Supervisor Katy Tang, Assessor-Recorder Carmen Chu, and Marjan Philhour, Executive Director of the Community Alliance for Jobs & Housing at this free feminist panel on civic leadership. Fine & Rare, 555 Golden Gate Ave, 6:30 p.m. to 8:30 p.m., free but registration required.

THE BLACK WOMAN IS GOD: The Black Woman is God, a new exhibit (running through Aug 26) at the SOMArts Cultural Center, celebrates the Black female presence as the highest spiritual form and challenges viewers to do the same. Thursday's opening reception will feature a tribute procession of 100 black women, including black elders, youth, and girls who will walk from SOMArts' parking lot to the gallery before performances by Destiny Muhammad, among others. SOMArts Cultural Center, 934 Brannan St, 6 p.m. to midnight, free.

BEN FOLDS WITH THE SF SYMPHONY: Ben Folds will perform alongside our own San Francisco Symphony to perform music from his long career as a solo artist and frontman of the band I listened to throughout much of college, Ben Folds Five. Edwin Cutwater conducts this night that will probably include "Brick," arguably the most famous song about abortion. Davies Symphony Hall, 201 Van Ness Ave, 7:30 p.m., $179.

SWAGGER LIKE US: "Your Queer dance party" takes over Oasis SF with AH MER AH SU performing this week alongside DJs DavOmakesbeats and boy_friend. Fishmouth for photographer Takeover Tokyo and join dancers Terrell Cherry and Jazmine Vieira on the dance floor until you just can't dance anymore. Oasis, 298 Eleventh St, 10 p.m. to 3 a.m., advance tickets cost $10 or $10 at the door before 11 p.m., 21-and-over.

NIGHTGARDEN PIANO: As part of the San Francisco Botanical Garden's annual Flower Piano project, behold a very special evening of NightGarden Piano. All twelve pianos placed throughout the garden as part of this summer program will be illuminated after dark and guests are welcome to tickle the ivories amidst twinkling lights. Beer, wine, and soft drinks will be available for purchase as well as snacks from food trucks. Bundle up and bring your best Chopsticks. San Francisco Botanical Garden, Martin Luther King Jr Dr, Golden Gate Park, 7:30 p.m. to 10:30 p.m., $40. 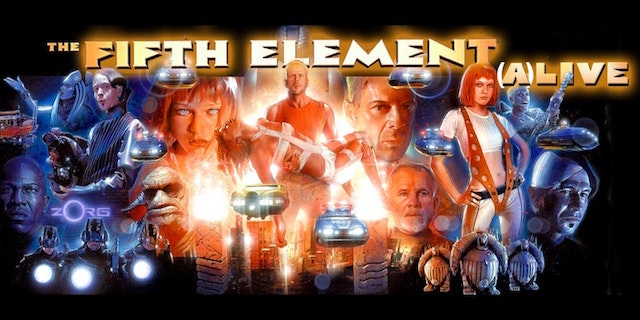 THE FIFTH ELEMENT (A)LIVE: Catch the sci-fi classic The Fifth Element in a Chinatown theater with multiple projectors, a giant sound system, two bars, a snazzy light show, live performances, dozens of special effects and a lot of people who are super into Mila Jovovitch. This event comes to us via Mad Dog Madigan, the guy behind the Edwardian Ball among other themed-soirees. Guests are advised to dress to impress (other Fifth Element fans.) The Great Star Theater, 636 Jackson St, doors open at 7 p.m., movie starts at 9:30 p.m. following by a dance party, $30 in advance, $35 at the door, 21-and-over.

PSYCHEDELIC FRIENDSHIP BINGO: This event under a "big top" in Alameda sounds deliciously weird and thus worthy of attendance. Psychedelic Friendship Bingo promises "Game show! Dance Party! Consequences!" From what we can glean, three BINGO games will be held throughout the night along with comedy, live performances, trivia contests, and celebrity (?) appearances. Guests are asked to approach in the spirit of friendship and with an open heart (and their own Bingo daubers from home if possible.) Tortona Big Top, 2001 Ferry Point, Alameda, 8 p.m., $40.

MARINE SCIENCE SUNDAY: Have you been lucky enough to see one (or three) of the humpback whales currently frolicking at the Golden Gate? Learn all about the magic under the waters that surround us at the Marine Mammal Center's "Marine Science Sunday." Catch a classroom program at 12 noon or 2 p.m. and then a docent-led tour at 11 a.m., 1 p.m., or 3 p.m.. The Marine Mammal Center, 2000 Bunker Rd, Sausalito,10 a.m. to 4 p.m., free.

RAGTIME: Here's a one-night only opportunity to see Ragtime, Terence McNally's musical adaptation of the famous E.L. Doctorow novel about the American Dream. The benefit performance will be performed by San Francisco Arts Education Project (SFArtsED) alumni, members of the Bay Area Theater Company, performers from the SFArtsED Players and young performers (!) from SFArtsED Summer's Broadway Bound program. If you've never seen it, now is a great opportunity and appropriate time in our nation's history to see this haunting and moving Tony Award-winning masterpiece. FOR EXAMPLE THIS. Nourse Theater, 275 Hayes Street, 5 p.m., $35 - $70.

There has not been a new Uber scandal breaking today (though we're still a while from the end of the business day Pacific Daylight Time). There is, however, an epic, 6,500-word exposé

Betty Dukes, the woman who led a class-action civil rights lawsuit against Walmart that reached the Supreme Court in 2011, has died at age 67. As the Associated Press reports, Dukes passed away