Get out and about! Select any number of these carefully curated events to broaden your horizons and hopefully not blow your bank account. Fans of comedy, cinema, and shopping will be especially jazzed by this week's selections:

CHERRY POP PREMIERE: This sounds fun! Catch a one-night only screening of Cherry Pop, a new film directed by Assaad Yacoub that follows "one wild, crazy night at a drag club, where the matriarch of the show Zaza refuses to come out of her dressing room, while a young newcomer, The Cherry, is tormented by the regular troupe of back-stabbing queens." The flick is followed by a Q&A session with cast members Bob the Drag Queen and Tempest DuJour. Castro Theatre, 429 Castro Street, SF, 7 p.m., $30.

SUTRO BATHS WALKING TOUR: Historian, native San Franciscan, and retired park ranger John Martini will lead a one-hour walking tour downhill to the ruins of Sutro Baths and the mysterious tunnels of Point Lobos. Martini will also point out the shipwreck sites of the freighters Ohioan, Lyman Stewart, and Frank Buck and discuss the presumably-fascinating history of this famous spot on the edge of the City. Lands End, 680 Point Lobos Avenue, SF, 5:30 p.m. to 7 p.m., $20.

SCIENCE SPEAKEASY: Why are humans better at baseball than, say, owls? Scientists will provide the answer to this burning question over cocktails at Public Works. "Science Speakeasy - A Giant Advantage: Baseball in our Bones" will feature evolutionary biologist and UCSF professor Nathan Young and San Francisco Giants' chief orthopedic surgeon discussing the biology of pitching and the science behind baseball. Public Works SF, 161 Erie Street (off Mission), SF, 6 p.m. to 9 p.m., $10 - $15.

DITA VON TEESE: "With jaw dropping costumes, a thunderous crescendo of music and superb production design, Dita brings burlesque to a whole new level," raved DEBI MAZAR. That should really be all you need to know about Dita Von Teese's "The Art of the Teese" Burlesque Revue. The Fillmore, 1805 Geary Blvd, SF, Thursday, Saturday, and Sunday, 7:30 p.m., $49+. 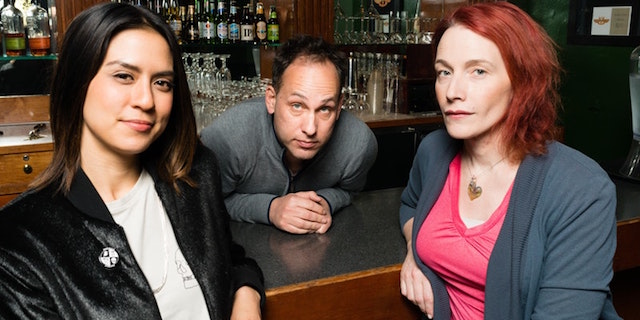 BAY AREA QUEER LIVES BEFORE 1930: History is always interesting and the Bay Area has a rich documented LGBTQ past spawning over a century, Take a look way back with "Faces From the Past: Bay Area Queer Lives Before 1930," an exhibit of tintypes, postcards, arrest records and other historical documents from NorCal's queer presence before 1930. Independent scholar Will Roscoe and San Francisco State University professor Clare Sears will take part in a panel discussion at the exhibit's opening reception. GLBT History Museum, 4127 18th Street, SF, Doors open at 6 p.m., panel at 7 p.m., $5.

TOT FEST: Bask in the glory of the tater tot, the only good version of the potato at Tot Fest! Jackrabbit (mobile) Kitchen will offer two versions of the iconic tot alongside beer pairings from at BareBottle Brewing Company. There appears to be no information on a tot-eating contest but let's hope a plan for that is underway. (Also, be warned, a whole lot of people are "interested" in this one.) Barebottle Brewing Company, 1525 Cortland Avenue, SF, 4 p.m. to 10 p.m., free.

RENEGRADE CRAFT FAIR: This is the mother of all craft fairs, and it's coming to Fort Mason this weekend. Food trucks, DJs, and a bar are second to all of the rad crafts you can pick up on the cheap  or relatively cheap. We're big fans of funky jewelry, quirky caftans, and Bay Area-centric art, although you never know what you'll stumble upon among the over-300 vendors (other than $100 artisan backpacks, which, no thank you.) Fort Mason Center Festival Pavilion, 2 Marina Blvd., SF, Saturday and Sunday, 11 a.m. - 6 p.m., free.

SF ANIME FESTIVAL AND COSPLAY 2017: The San Francisco Anime Fest is "an event for cosplayers, by cosplayers." Enjoy all sorts of themed and costumed live performances and events, fun food and shopping opportunities, and a great excuse to dress up in your favorite cosplay ensemble. Even if you're not a die-hard anime fan, this free event in the heart of Japantown is sure to provide for some spectacular people watching. There's an official After Party from 6 p.m. to 9 p.m. at Origin SF for $15-$18. SF Anime Festival, Japantown's Peace Plaza, 1610 Geary Blvd., SF, 10 a.m. to 5 p.m. (we think), free.

SUNDAY STREETS MISSION: Drivers beware! Valencia Street is shutting down so that happy pedestrians, cyclists, roller-skaters, strollers, and cute dogs can wander freely while learning about culture, community, and what to do during an earthquake. Enjoy family-friendly activities offered by local nonprofits and small businesses, live music, delicious food options, and free blood pressure screenings as the Mission gets its turn at the city-approved, Colombian-inspired Sunday Streets program. Valencia Corridor from Duboce to 24th Street, 11 a.m to 4 p.m., free.

'MOANA' SING-A-LONG: Sing along to the (admittedly adorable) movie that will make you fall in love with Dwayne "The Rock" Johnson. Or simply make a little kid who loves Disney films very, very happy at this sweet screening of Moana hosted by Sara Moore & Laurie Bushman, complete with goodie bags and a costume contest. Steph Curry knows all the words - shouldn't you? Castro Theatre, 429 Castro Street, SF, Saturday and Sunday at 1 p.m., $11 - $16.

UPDATE 2 downtown San Francisco! if you see me in the bottom right red circle you can imagine what it feels like to have these golden plants towering over me as I work.