The Dogpatch Press, which features writing "by furries, for furries," has the news of a stolen lion costume head. "Clumzy Lion" was in town following the Biggest Little Fur Con in Reno on June 1 through 4. His head and passport were stolen from his car while Clumzy Lion, presumably exploring as a human, swung by Fisherman's Wharf before flying home to Toronto, Canada.

The passport has since been found, but Clumzy's head remains missing. 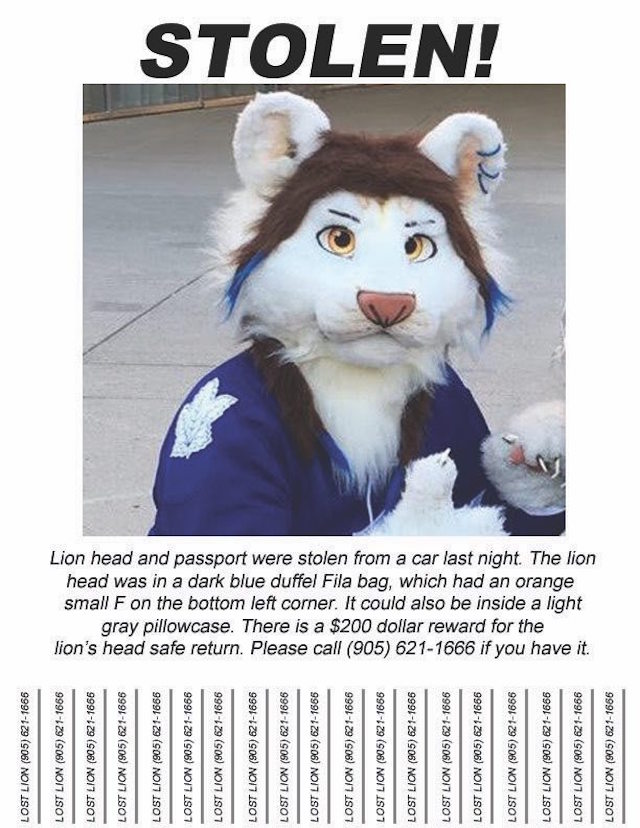 The furry community has come out in full social media force to help Clumzy find his head. Meanwhile, the Dogpatch Press laments the sad state of affairs, stating, "Keeping a Pelican case in a car appears to make special temptation  thieves think a big case means it's full of gold, instead of a custom-tailored costume with priceless personal value."

This isn't the first time a fursuit has been stolen on the mean streets of San Francisco. Last year we reported on the theft of Zarafa's giraffe suit from the Frolic furry dance in SoMa. The suit was later discovered by a homeless person and returned to its rightful owner.

A pair of apparently unworn, custom-emblazoned, Apple-branded sneakers from the early 1990s have gone up for auction via a company called Heritage Auctions. They have simultaneously gone up on eBay, where the opening

A pair of large restaurant spaces that helped transform the Uptown neighborhood in Oakland in the last decade are about to get split into four smaller spaces, with the latest closure being Southern

—
Eyes Peeled, SF! A Fursuit Was Stolen From Fisherman's Wharf
Share this