The Washington Nationals' Bryce Harper was not having it when Giants pitcher Hunter Strickland hit him with his first pitch during the eighth inning of a game at AT&T Park on Monday, and Harper immediately launched his batting helmet at the pitcher, and ran up to the mound for a fight. Strickland landed at least one punch, and Harper landed one, and immediately both benches cleared as the two players looked ready for a full-on brawl, as ABC 7 reports.

Fellow Giants pitcher Jeff Samardzija also jumped quickly into the brawl, as did the Giants' Michael Morse, and it ultimately took three men to wrestle Strickland away and back to the dugout, as Bay Area Sports Guy noted on Twitter.

Both players were ejected from the game, and the Nationals went on to win 3-0. 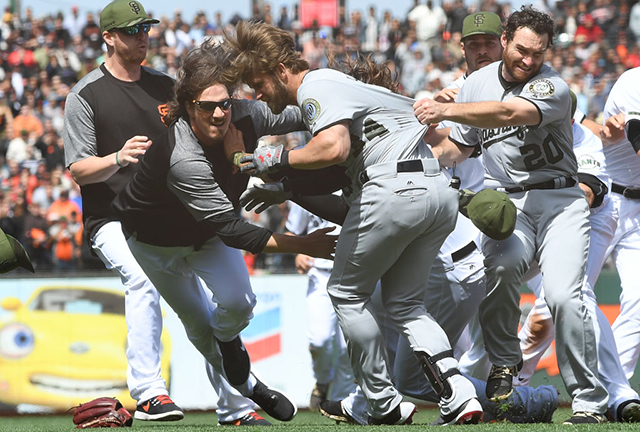 To put things in some context, this was the first time Hunter Strickland had faced Harper since the 2014 National League Division Series when Harper hit two monster home runs off him, as Yahoo Sports' Jeff Passan notes. But this was Harper's ninth career ejection from a game, and only Strickland's first.

No doubt, Strickland's 98-mile-per-hour fastball had to hurt, and he said after the game that he was just trying to throw inside to Harper, according to NBC Bay Area, adding, "Obviously, I got it in a little bit too far."

The two teams face off again tonight at AT&T Park at 7:15. See some more angles on the fight below.

This is the Bryce Harper and Hunter Strickland Fight #Nats #giants pic.twitter.com/BbkJuQTa3B

Bryce Harper and Hunter Strickland get mad, punch each other in the face. pic.twitter.com/9tLtDGqb8m

Bryce Harper goes after Hunter Strickland after an HBP and then Mike Morse and Jeff Samardzija are collateral damage. pic.twitter.com/jton90huP5

Hunter Strickland is going to be suspended for quite a while pic.twitter.com/C3gwwmklVi

A lot going on with this brawl, but Hunter Strickland having to be wrestled off the field by three teammates was the craziest scene. pic.twitter.com/4GpGjvEli0

Find someone who looks at you the way Bryce Harper looks at hunter Strickland pic.twitter.com/4oN3FqhwHG

Jeff Samardzija #29 of the San Francisco Giants goes after Bryce Harper #34 of the Washington Nationals after Harper charged the mound from being hit by a pitch from Hunter Strickland #60 in the top of the eighth inning at AT&T Park on May 29, 2017 in San Francisco, California. Giants Michael Morse #38 jumps in the middle as National's Daniel Murphy #20 tries to pull Harper away. (Photo by Thearon W. Henderson/Getty Images)

Though San Francisco's 2017 crime rate is lower than last year's, there's one area where we're seeing a significant uptick: Homicides, which are occurring in far higher numbers than in 2016. And as

Breaking news-major Bart delays this morning systemwide. I am live at the millbrae Bart station @kron4news pic.twitter.com/WtLEDG52sL— Will Tran (@KRON4WTran) May 30, 2017 It's hard enough to force oneself back