Elly the Eastern black rhinoceros, the oldest surviving member of her species in the United States who has delighted San Franciscans for nearly four decades with her docile, plodding presence, died last Wednesday, May 3 at the San Francisco Zoo. She was 46.

Her death was confirmed in a Monday statement from the San Francisco Zoo. KTVU reports that Elly was anesthetized after a surgery on one of her legs showed that she had been enduring extreme pain. The zoo’s team of veterinarian experts determined that her quality of life had deteriorated such that the humane decision would be to not wake her from surgery. 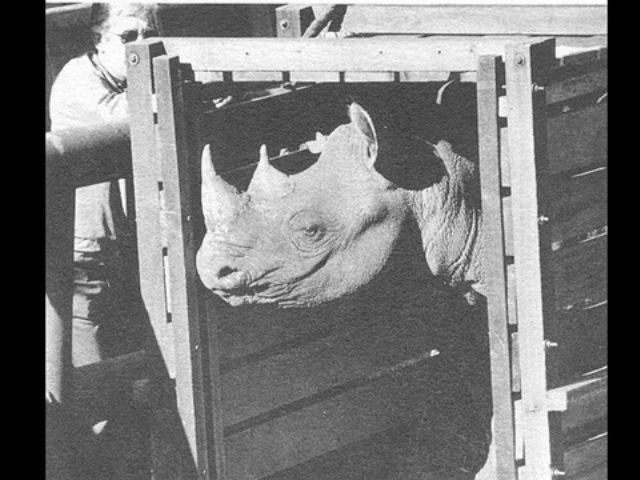 Elly arrived at the San Francisco Zoo as the young calf seen above on April 16, 1975. She has bred healthily over the years, but the endangered Eastern black rhino species — now surviving only in Africa and in zoos, where they are still often poached for their horns — has dwindled to just above 5,000 worldwide.

“As one of our longest-standing residents, Elly was an outstanding animal ambassador for the endangered black rhino species, which faces continued risk from poaching, mainly for its horn," San Francisco Zoo & Gardens president Tanya M. Peterson said in a statement picked up by CBS 5. "We are grateful to have celebrated many wonderful years with Elly, and she will be dearly missed by the Zoo team as well as millions of guests who connected with and cared for her."

In lieu of flowers, the San Francisco Zoo family has asked mourners for donations to the International Rhino Foundation to continue supporting the viable populations of the five remaining rhino species across the world.

Elly was fond of watermelons, mud, and smashing pumpkins (not the band, but the literal act of destroying the gourds for her amusement.) She is survived by 14 calves, 15 grand-calves, six great grand-calves, and one great great grand-calf. According to the zoo, her 8-year-old grandson Boone also lived at the SF Zoo’s rhino habitat, and was named for former 49ers guard Alex Boone.

The mystery of the small girl nicknamed "Miranda Eve," found strangely well preserved inside an expensive glass and metal coffin buried beneath a home on Lone Mountain last spring and believed to have

More details are emerging in the petty theft case that is gripping the Bay Area mostly because it involved a gang of deplorable teens, random assaults, and a public transit system everyone loves