32-year-old Facebook CEO and Mission District resident Mark Zuckerberg recently announced plans to travel to the 30 American states he's never visited and like, connect with the flyover people. In preparation for his trip to Ohio, Zuckerberg's staff managed to dig up a family that had voted for Barack Obama twice before lending their support to Donald Trump.

Yes, thought Mark Zuckerberg. I will break bread with these Ohioans.

Business Insider reports that 57-year-old Daniel Moore of Newton Falls, Ohio works at a Russian-owned steel mill as an engineer and his wife Lisa is a school teacher. He revealed his recent voting record to a local paper and Facebook's team of global spies added Moore to their watchlist.

According to Moore, a couple of weeks before Zuckerberg arrived into town, Moore got a phone call asking if he'd be willing to host a billionaire philanthropist from California for dinner. Once convinced this offer to hit a stranger for dinner was legit, Moore let an advance team come to his house and take pictures. He then invited all the family and friends that could squeeze around his dinner table. It wasn't until 15 minutes before suppertime that the Moore's guest name was revealed. OMG the guy from Facebook!

Mark Zuckerberg and his wife Dr. Priscilla Chan have pledged 99% of their net worth towards charity, much to the future chagrin of their children.

Here are some fun facts that Moore revealed about the dinner: 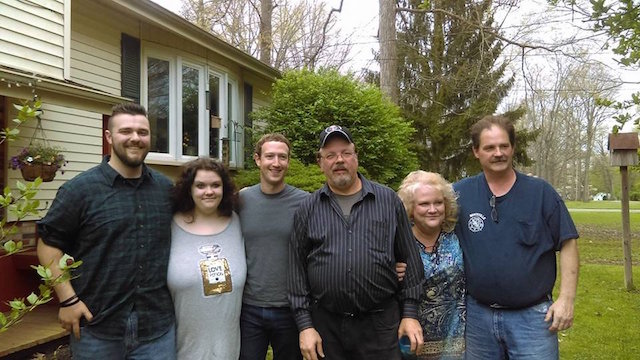 It remains unclear what was on the night's menu. I see a lemon slice, I see what appears to be penne. Anyone?

This is your punishment for voting for Trump - dinner with a rich nerd. (Daniel Moore)

A month after it capsized and sank in a storm, a 112-foot construction barge named Vengeance remains in the muck at the bottom of San Francisco Bay, resting "very near" where BART's Transbay

Until a run this week-end, the SF Symphony had not performed Berlioz' Requiem in almost thirty years. Part of the reason is logistics: it requires an expanded orchestra and three choirs, for a