“This is all so stupid and sad, and all these lives are ruined,” says Mitri Hanania, an attorney who once represented murdered man Keith Green, speaking to the Associated Press in a revealing new piece about his case. Green's former girlfriend, 31-year-old Tiffany Li, stands accused in his April 2016 killing, along with her boyfriend, 30-year-old Kaveh Bayat, and a fellow MMA fighter who described himself as Bayat's "bodyguard", Olivier Adella, who has a questionable past of his own and who is now cooperating with investigators. To the dismay of Green's family, Li's mother and her wealthy friends put up $4 million in cash and $62 million in property to bail her out last month, a bail amount unprecedented in San Mateo County  a judge set Li's bail at $35 million, and under California law, twice the bail amount can be met with real estate property, freeing her under house arrest after nearly a year behind bars.

Prosecutors have released a number of new details in the case to the AP, some of it from interviews with Adella and Li's mother, who described Green as a "black hole" in the family who she clearly disapproved after he fathered two children with her daughter.

We've known since the case first made the news last May that Green was last seen on the evening of April 28, 2016, when he left his apartment to meet Li at the Pancake House in Millbrae, strangely leaving his wallet and keys behind, according to roommates. According to prosecutors, Li has said she and Green simply sat in a car in the restaurant parking lot and had an "amicable" talk about their children, after which Green drove off, never to be seen alive again. Just two days later, Green was set to assume 50 percent custody of their two small children, after Li had broken up with him and kicked him out of the Hillsborough mansion they shared, paid for by Li's mother  a Chinese real estate magnate who, like Li, is a naturalized US citizen. 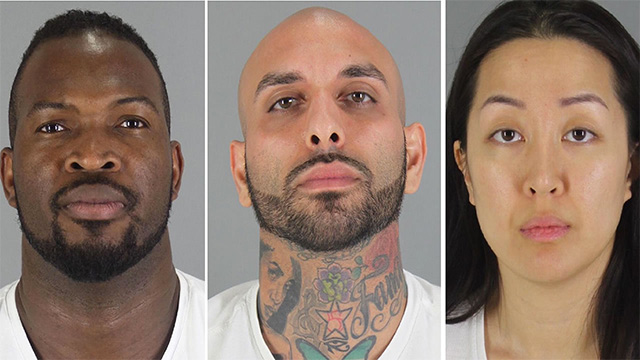 We also now learn that Li grew up privileged, largely in the Bay Area, attending the tony Santa Catalina boarding school in Monterey as well as five other private schools in the region, and she met Green in 2009 when she was 23 and he was 21. Green, a college dropout, would eventually enroll in the Cordon Bleu culinary school in San Francisco, bankrolled by Li's mother, while Li collected a $100,000/year salary from her mother to help manage her real estate holdings. After they broke up, when Li began a relationship with Green's friend, Bayat, Green was allegedly being paid a $4,000/month stipend and given a vehicle.

Prosecutors say that cellphone pings contradict Li's version of events on April 28, putting both Green's and her own cellphone back at her Hillsborough home. Green's cellphone would later be found in Golden Gate Park, and his body would be discovered two weeks later in some woods in Healdsburg.

According to Adella, the six-foot-five-inch "bodyguard" and MMA fighter whose estranged wife told the media last year that he was a con man, Bayat called on him the night of Green's murder to dispose of the body, but he had no role in Green's death.

The most chilling part of the AP piece:

[Adella] said Li and Bayat showed up at his apartment the night of the restaurant meeting with Green’s body in the front passenger seat of Li’s SUV, blood coming from his mouth and ears.

Olivier told detectives Bayat showed him a handgun stuffed in his waistband and handed him gloves.

“I need you to take out the trash,” Olivier says Bayat told him.

It's unclear what other physical evidence investigators may have, but both Li and Bayat were arrested at the Hillsborough mansion and charged with murder on May 24, 2016. Using cellphone records, Adella was arrested several days later and also charged.

Li remains free on bail, despite prosecutors' protests that she could be a flight risk given her mother's wealth and connections.

An off-duty Uber driver was allegedly abducted at gunpoint Saturday night and forced to drive to Richmond, where his car was then stolen. As ABC 7 reports, the driver says that a man