Marc's Corner, an art gallery inside the Market Street medical marijuana dispensary the Apothecarium, is named for Daniel Bergerac's late husband. It's a signifier of how, for Bergerac, who owns Mudpuppy's dog grooming and serves as president of the Castro Merchants Association, marijuana is related to queer identity.

"Medical marijuana is personal for me," Bergerac writes in the Examiner. "I’ve lost two husbands — and countless friends — to HIV/AIDS. Cannabis eased their suffering like nothing else. It kept other patients alive long enough to access life-saving treatments. In the 1980s, we had to find marijuana on the street, like criminals."

Tonight Bergerac and Eliot Dobris, a PR consultant and head of community outreach for the Apothecarium, have organized an Outer Sunset protest against a group that's both anti-LGBT and anti-cannabis: The Pacific Justice Institute, which is designated a hate group by the Southern Poverty Law Center and which also filed suit against the city last year over an open-air urinal in Dolores Park. In the neighborhood, PJI has fostered opposition to a proposed expansion of the Apothecarium, the dispensary claims. "They're taking neighbors' concerns and pouring gasoline on them," Dobris tells SFist. "PJI are using lies about medical marijuana — just as they do against the LGBT community," he writes in a press release. 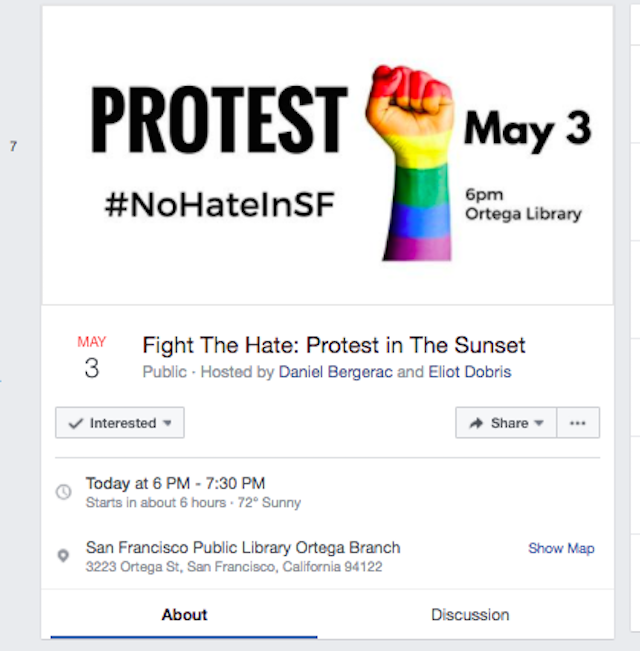 While there are many letters in support of the proposed dispensary, which would be co-owned by former Oakland mayor Jean Quan and her husband Dr. Floyd Huen, a medical marijuana proponent, the Apothecarium is not without detractors. Some opposition has been voiced along religious lines and is allegedly fomented by PJI, who have represented conservative Outer Sunset churches in past years. Specifically, Apothecarium's representatives say PJI was behind activists who shut down an Outer Sunset community meeting about the dispensary earlier this year. "In March, PJI and their allies intimidated and shouted down Dr. Huen at a community meeting," Dobris writes, "preventing him from even speaking to the group that had invited him — using protesters brought in from outside the district."

Hence the protest, or counter-protest tonight, which also invites residents of all districts. "Please don't let them do it again," reads the Facebook event description, in which the Apothecarium's name is absent. "You don't have to go to Mississippi to fight a hate group. Take a stand right here in San Francisco."

As demonstrated in Pepsi's much-criticized ad with Kendall Jenner, the concept of protest or resistance, whose political prominence and power are at a historic high, is at risk of manipulation. Is the Apothecarium at risk of engaging in such ghoulish, capitalist cooption, albeit on a much smaller scale?

For Dobris, and for many, it's more simple than that. "The primary purpose of the protest is to raise awareness that PJI is a hate group spreading lies in the Sunset," he tells SFist. "They are an outside group that's come in with a mission of hate and we're protesting them." But PJI, it bears noting, is a hate group because it opposes the rights of LGBTQ people, not because it opposes cannabis. "We're not saying that everyone who has concerns about our dispensary is a bigot," says Dobris, "but we are saying that far too many people are hearing lies about medical cannabis and that the source of those lies is PJI."

But If the goal of tonight's protest was keep PJI from shutting down a community meeting, it's backfired. The library has cancelled the meeting, although the protest will go on. "The library told us late last night that we could no longer use the community room," Dobris says, adding that they had made the reservation long in advance and had confirmed it as recently as yesterday morning. The library's concerns, says Dobris are that that too many people would show up and that the crowd would become unruly.

For now, the Apothecarium will continue neighborhood outreach. They're looking to reschedule the meeting, and are due to appear before the planning commission on June 8. The protest tonight will begin at 6 p.m. at the SFPL's Ortega Brach at 3223 Ortega Street. More information here.

Onetime surfing legend Kevin Reed, a.k.a. Kevin Callahan, was arrested Sunday and questioned by Santa Cruz police in connection to the death of another man whose body was found by some

If you're thinking about celebrating the end of this week's hot temperatures with a fire in one of Ocean Beach's prison-looking fire pits, slow your roll, Sparky: Issues with Bay Area air quality

—
Grassroots? Apothecarium Is Behind Protest Of Anti-LGBT Group That Also Opposes The Dispensary
Share this