A very bohemian, kind of ramshackle looking houseboat in Sausalito just hit the market that was was once briefly home to the great Shel Silverstein. It's a former WWII balloon barge, as this 2015 Marinscope piece explains, and until last year it was home to Silverstein's close friend, photographer and artist Larry Moyer. Curbed catches the news of the listing at 8 Liberty Dock, with an asking price of $390,000, and notes that the realtor makes no mention on his website of the houseboat's famous former owner (some of the photos say $425,000, so maybe this price was reduced).

The one-bedroom, one-bath barge is touted as being a "great opportunity to remodel," or the listing says, "or start fresh and build a new barge and home." But how could you tear down this crazy cool place where Shel Silverstein lived?

Per Marinscope, Moyer explained in an interview in 2015 that he and Silverstein had both been sent on assignment in 1967 by Playboy Magazine to document the craziness of the Summer of Love in the Haight-Ashbury. They spent three months in the Haight, and then escaped the chaos in Sausalito, visiting a friend of a friend who had a houseboat there. "There were a few hundred boats. It was total freedom," Moyer said. "The music, the people, the architecture, the nudity  all we could say was, ‘Wow!’ So Shel bought a boat, and I bought a boat. And that was that." 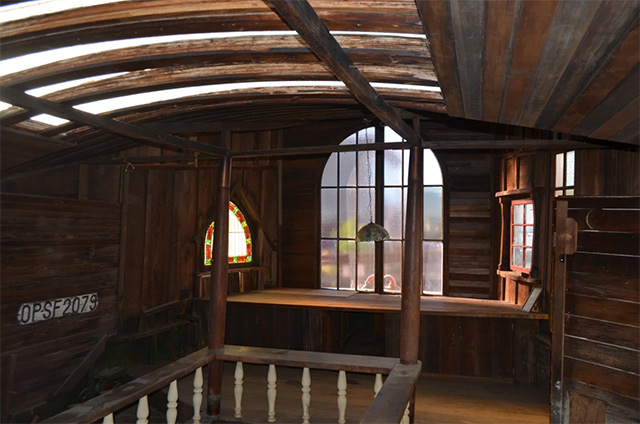 The houseboat figures in to Silverstein's 2007 biography, A Boy Named Shel, "In the beginning the houseboat community was essentially a community of squatters who had only salvage rights... The whole place was a bit like living in Never Never Land. Since Shel was a modern day Peter Pan, the two fit together perfectly."

It's unclear how long Silverstein lived on the boat, but within a few years he would become a father with a woman in Sausalito, Susan Taylor Hastings. And it seems that Silverstein may have left the houseboat behind after dual tragedies took the lives of both Hastings and their daughter Shoshanna. At the time of his death in 1999, Silverstein owned homes in New York's Greenwich Village, Martha's Vineyard, Key West, and the Sausalito houseboat. Parts of his famous first book of children's poems, Where the Sidewalk Ends, were likely written here, as it was published in 1974 when his daughter was just four years old.

Photographer Richard Olsen photographed Moyer sitting outside the houseboat just before his death, and you can see that here.

Below is a video, apparently shot in the late '60s or early '70s, of a performance by Dr. Hook and the Medicine Show aboard the houseboat, with Silverstein himself on harmonica.

The San Francisco Police Department is seeking a violent driver today, after the man allegedly attacked a construction worker who was directing traffic in the Lower Haight. NBC Bay Area has the tale,