The front of a vacant industrial building on Valencia Street that was last used as a Volvo dealership is seeing new life with a colorful mural and a temporary tenant in a gallery, shop, and "living room" art space called Parlor SF. The space at 235 Valencia Street, between 14th and Duboce, is slated for development, as we learned last summer, so Parlor is just a pop-up. Developer DDG hopes to build 50 units here, demolishing the current structure. However, it's been suggested that the building's past — it dates to 1924 and was once a motorcycle dealership owned by an important figure in West Coast motorcycle history — might complicate that process.

Parlor calls itself "part community living room, part art house, and part greenhouse." Everything in the light-soaked space is created by local artists and for sale — including a variety of plants. Parlor celebrated its opening last week, and it is now open Tuesday to Sunday from 12 p.m. to 7 p.m.

"The spring-summer pop-up will feature a rotating selection of painting and sculpture, unique furniture, tableware, house plants, and provisions," according to Parlor's website. It's the project of the workshop Oak + Fog, who are artists Kioni Cho and Daniel Raimond, and Arianne Gelardin, a curator at StoreFrontLab and a consultant for the SF Arts Commission. 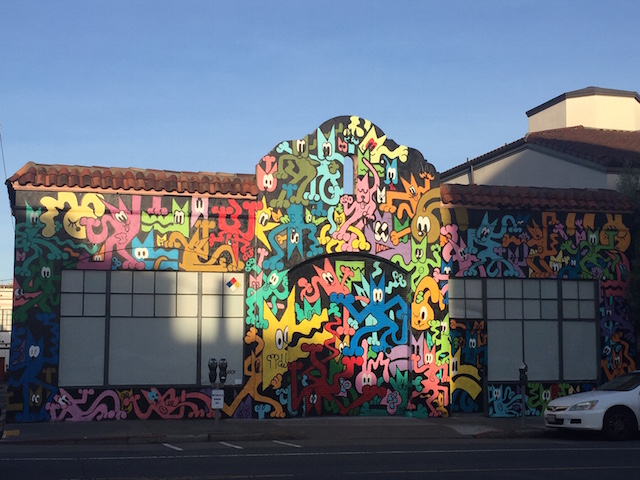 The muralist who jazzed up the building, Primo Pitino, might be familiar to the eyes — and ears — of San Franciscans. Pitino is known for his DJ nights as well as his work drawing cats.

The San Francisco Police Department is seeking a violent driver today, after the man allegedly attacked a construction worker who was directing traffic in the Lower Haight. NBC Bay Area has the tale,

DNA tests confirm that it was,indeed, a mountain lion that took a dog from a Pescadero home. Wow, [Slate] sure loves Elon Musk. Lyft driver sues Uber over that "hell" tracking program.