PG&E's supposedly real-time outage map, on their website, was nearly blank for San Francisco well over an hour into this morning's mass power outage  with the exception of a single reported outage in the Outer Sunset, as seen above  causing many to question why the utility would bother providing this tool at all. SFGate seized on the gaffe, and the outage map page now says across the top, "We are currently experiencing intermitent delays in updating the outage map. PG&E is aware of the large San Francisco power outage. We are currently working to resolve these issues."

The map itself is supposed to be updated every 15 minutes.

According to @PGE4Me there is no #SF #poweroutage .. what good is a status page if you don't update it? pic.twitter.com/rVvM3BoX3V

As of noon, the map looked more like this: 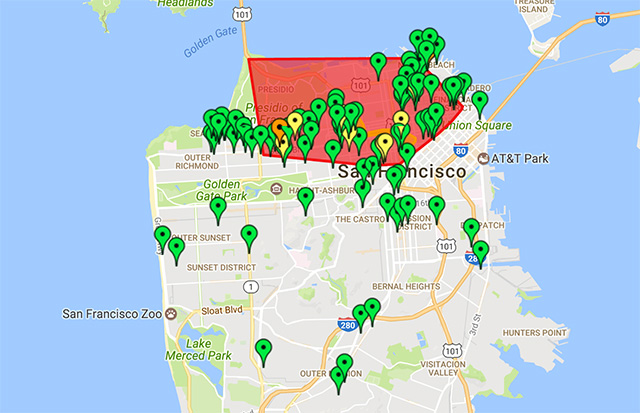 The outage began at 9:15 a.m. and reportedly was affecting 95,000 customers at its peak. PG&E was just tweeting that the power is back on for 10,000 customers, and they are working to have things fully restored by 1 p.m. [Update: Make that 5 p.m.]

Most concerning was that a substation on Larkin Street appeared to be on fire, and PG&E confirmed that there was a fire there around 9 a.m. this morning, as the Chronicle reports, however a spokesperson said "it was not yet clear whether the blaze was a cause of the blackout or the result of it."

Smoke is coming out of the PG&e substation at Larkin Street. Firefighters on the scene. @kron4news pic.twitter.com/LU9bqqm4lj

The fire was reportedly under control as of 10:50 a.m.

You may recall that this same substation got knocked out during the December 2014 Rainpocalypse  a storm which now seems like child's play in comparison to a few we had this winter  killing the lights for roughly the same northern swath of town.

Disney character Jiminy Cricket might be best known for singing "When You Wish Upon A Star," but, what the heck, wish-granters — when I wished upon a star for a giant plate of nachos,

The SFMTA touts its greener efforts. [Moving SF] UC Davis dorm gets vending machine that carries Plan B. [KRON 4] SF's fastest growing jobs that pay at least $70K are all in tech.