The lot at 22nd and Mission Streets is a disaster area. It's the site of a fatal 2015 fire that displaced over 40 residents and several businesses. Three smaller, subsequent fires rendered the burned-out building little more than rubble, and last year, a construction vehicle dismantling debris in a city mandated demolition effort tumbled through the unstable site floor. Fenced-off and dormant, the lot is now home to rats and croaking frogs in a muddy, manmade marsh, as Jessica Benner observed on Instagram this February.

A caustically comic sign now plays off the site's new residents. A bolted-down metal plaque designed in a formal style that takes after official city signage explains the lot is "The Mission Memorial Frog Sanctuary." According to area chronicler Capp Street Crap and her sources, the sign appeared in the past week.

"This plaque is dedicated to all the loved ones who were forced to relocate as a result of the fire, to those who have allowed the frogs to resurface, and to those who continue to secure the survival of the sanctuary," the text reads. 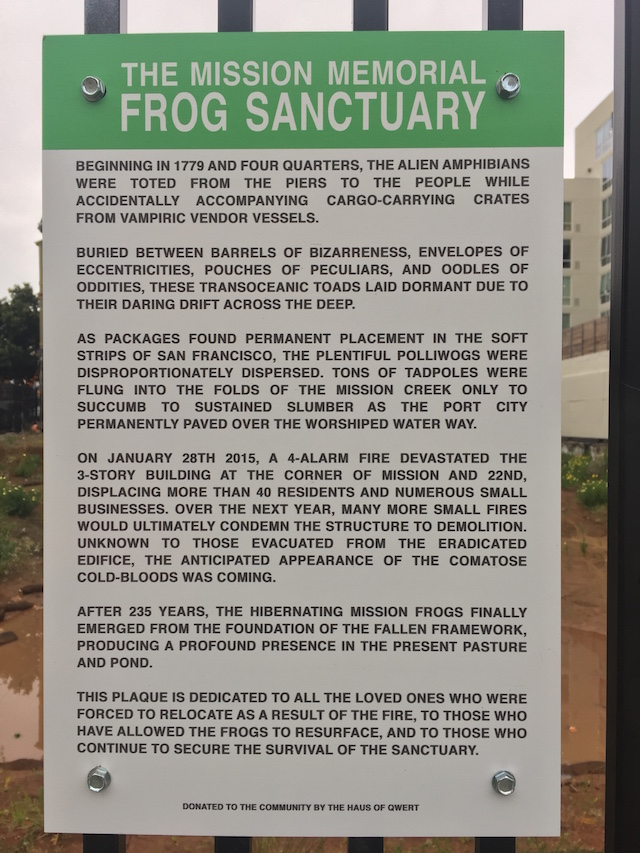 Responding skeptically to the artistic choice on Twitter, Olu Johnson wrote "imagine if you lost your home/business and some people put up a joke sign for lulz."

However, the sign, heavily laden with alliteration, may seek to evoke more indignation than "lulz." It's "dedicated by Haus of QWERT:" That's Cody Frost, an area artist who writes that "HoQ puts Cody’s unique sense of style, play, humor, and DIY spirit into all projects. Working together with clients, HoQ strives to challenge the Established and sidestep the common. HoQ is here to help Question What Everyone Really Thinks." Hence QWERT, a pun on the common keyboard setup.

On Instagram, Frost writes: that the signs celebrate "fictional Mission history while recognizing the loss of the homes, jobs, and lives of working class people in the Mission. Please consider the impact this pit (like so many others) has on everyone's continued lives in the neighborhood," he writes. "If I can't prevent the destruction, at least I can make an attempt to bring some humor and joy to an otherwise dreary place." SFist has reached out for further comment from the artist and will update this post if Frost replies with one.

A similar sign, as Andy Cooper points out on Twitter, has appeared at the site of another Mission area fire, this one at 29th and Mission Streets where a devastating blaze destroyed businesses and an SRO hotel, displacing 58 people.

Update: "I made these signs because I wanted to bring some silliness and humor to otherwise dreary locations," Frost writes to SFist. His statement:

live directly across the street from the pit at 29th and Mission. I have seen its many stages of decay and demolition. After the heavy rains during the beginning of the year, while looking out my window, I realized that the pit looked like a man-made pond, deep and gross and surrounded by amazing graffiti. I reflected on how much sadness shrouded the corner - with the emptiness which had been Cole Hardware and Playa Azul and the shell that remains of Graywood Hotel and Taco Loco - and thought about dedicating the pond to the memory of what had once been. As I played around with the concept of a memorial sign, I decided to write a silly bit of historical fiction about the original of a man-made marsh which predated the buildings that no longer existed.

It was around that time, while walking to catch a movie at the New Mission, that I heard frogs croaking in the enormous pit at 22nd and Mission. Of course I knew about that fire as well, the loss of life and home and livelihood. I had heard rumors of it possibly being rebuilt. Sadly, many smaller fires ultimately condemned the whole lot to be torn down and left barren. I hadn't been by it since before the rains and my friend explained that he heard those toads talking every night he walked by. That's when I decided to make a sign for that location too.

Authorities are still on the hunt for 37-year-old Steve Stephens, the suspect in the Sunday murder in Cleveland, Ohio that was recorded on video and posted to Facebook. The video depicted Stephens seemingly

A quiet war seems to be brewing within City Hall over the handling of homeless encampments, marking yet another chapter in a multi-year saga involving police, sanitation workers, homeless advocates, outreach workers, politicians,