Bursting onto the SF ice cream scene with such audacious flavors as Cinnamon Ancho & Cajeta and Roasted Strawberry Tres Leches, Portland's own Salt & Straw opens its doors in Pacific Heights today at 2201 Fillmore. The much anticipated debut is sure to bring ice cream fiends from far and wide to sample from the eclectic menu, which you can see in full below.

Owners Kim and Tyler Malek have rapidly expanded their business since it began in 2011, opening three locations in Portland and four in Los Angeles. The secret to their success has been both the quality of their ice cream and the originality of their flavors, which push the boundaries of ice cream propriety with culinary and often savory combinations like Pear & Blue Cheese (not currently on the SF menu), and their now annual stunt creating flavors inspired by the Thanksgiving table, including Salted Caramel Thanksgiving Turkey.

They've also made a point of creating flavors specific to each location, and their first SF spot is no exception. Limited edition, seasonal flavors here include a Green Apple Mayo Sherbet made with apple juice from the Sierra Nevada foothills, apple cider vinegar from Sonoma, and Berkeley olive oil; Cascara Shrub with Candied Hibiscus, which is made with a coffee bean and apple cider vinegar shrub made in Berkeley; and Caramelized Almond S'Mores, made with Annie's graham crackers.

And for those for whom a trek to Pac Heights is a bridge too far to travel for ice cream, Salt & Straw is opening a second SF location in Hayes Valley later this spring, at 580 Hayes Street. 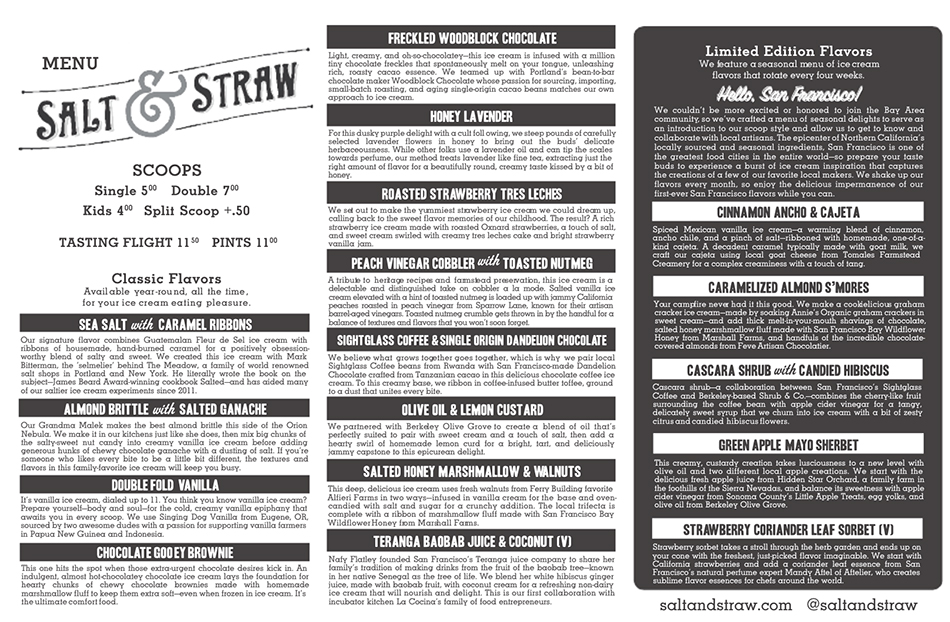 An Outer Sunset man who was arrested last year for making threats on Twitter against Acting Police Chief Toney Chaplin has been arrested again, this time for making in-person threats against a neighbor

A bus driver who attempted to document a transit lane violation was attacked Thursday evening, and police say the suspect remains at large. According to the San Francisco Police Department, the incident happened