Getting the right 469 trees to plant in the Transbay Transit Center's crowning rooftop park has been a difficult task, and in part, Apple is to blame. The long-awaited San Francisco development project, which opens late this year, has reportedly been competing for ideal tree specimen with the Silicon Valley titan's enormous doughnut-shaped campus. That, of course,
is Apple Park, which opens this month, and sought 3,000 new trees for its central green space. The Transbay Center's landscape architect Adam Greenspan and contractor Patrick Trollip explained what it was like to scouri tree nurseries to the Chronicle. From the paper:

Buying trees is a surprisingly cutthroat business. And it’s been especially challenging to locate desirable specimens because Apple has been buying up 3,000 trees for its new Cupertino headquarters. When Greenspan and Trollip found a tree they fancied they would “tag it” with a locking yellow tag, so that nobody else — like Apple — could get it. Eventually all the tagged trees were moved to a nursery in Sunol, where the Transbay project team leased 4 acres. 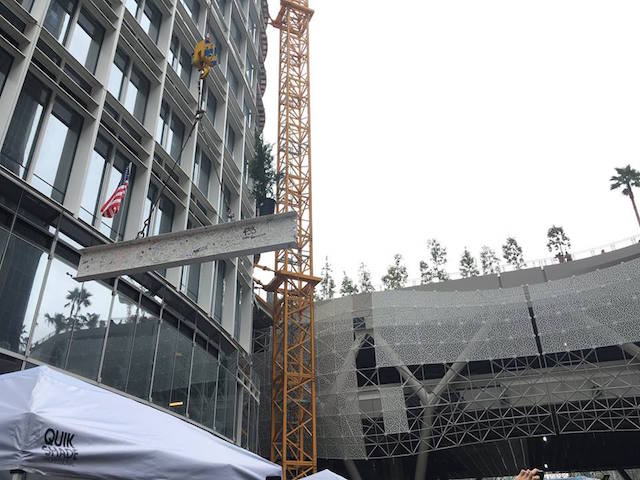 60 trees have been delivered to the Transbay Transit Center so far — they began arriving in January — and the 5.4-acre rooftop garden is beginning to take shape, the tops of trees now visible from the street. “I think there is going to be a tree for everyone,” Greenspan told the Chronicle. “We have grand and stately trees, and we also have weird trees, quirky ones.” 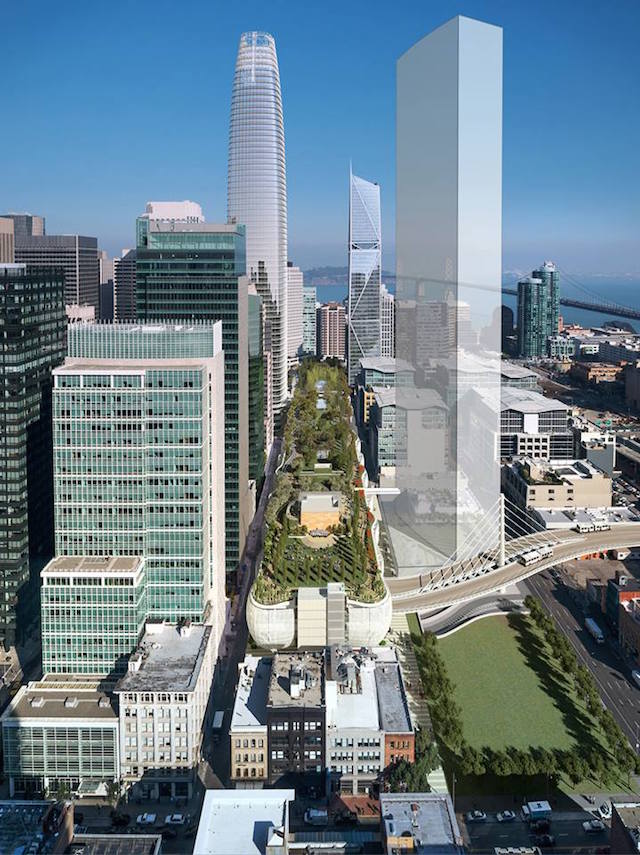 “This is going to be one of the great parks of San Francisco, and it’s going to be a public space unlike anything else we have,” said Gabriel Metcalf, president of the urban think tank SPUR. He's far from alone in that opinion, which is shared by the architect Cesar Pelli: The Chronicle's critic John King visited Pelli at his firm in New Haven this week, and after King commended Pelli on 560 Mission, his "favorite San Francisco tower of the past 15 years," Pelli responded with praise for the Transbay project.

“I’m very proud of 560 Mission, but the transit center with the tower is much better — more important... The wonderful thing about those big projects is that they have a large impact on the city.” Pelli added, “That impact, if you plan and design it carefully, can be very much for the good.”

Pelli is an interesting figure for King to invoke right now, since last week, the critic quoted the complaints of Stanley Saitowitz, an architect critical of SF Planning. "Planning wants textbook replicas," Saitowitz lamented. The department had no appreciation — or understanding — for architecture, he asserted.

That lead Curbed to seek a rebuttal from John Rahaim, SF's Planning Director. Rahaim outlined an ethos of "preventing really egregious architecture," the kind of stuff that looks like "crap" in five years. "You can’t create great architecture through zoning and review," he said.

In the late 1980s, Pelli himself designed a building for San Francisco that might not have stood the test of time: A 400-foot tower for Market Street that would have been crowned with a 120-foot lattice. But Pelli, who was the dean of Yale's school of architecture before founding his firm in 1977, is an example of a designer who's made peace with the difference between academic and actual architecture. Hey, if it's planning departments who prevent things like this vision of a future San Francisco, dug up by the Redditors of r/retrofuturism, then maybe we ought to thank them. 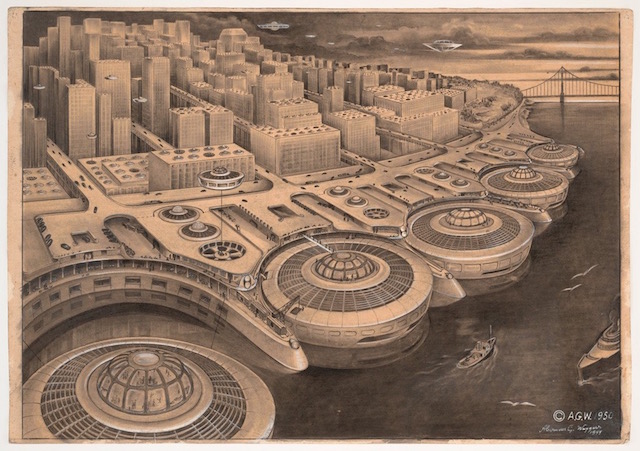 Of course, these flying saucers on the Embarcadero could be sort of cool, now that I think about it. What if we planted some trees on them?

After just two years and change at the corner of Market and Sanchez, Hecho Cantina, née Hecho (and before that Bandidos), will be closing its doors soon to make way for new owners.

Fast Company just scored a sit-down with Mark Zuckerberg, and in the interview they discuss the 32-year-old Facebook CEO's 6,000-word mid-February open letter about building a global community, whether or not money