In the past SFist has highlighted cool local fashion labels, vintage stores, and the best places to buy a men's suit. But despite SF being a mecca for style-conscious, discerning female shoppers who prefer an independent boutique to a chain store, we've never before rounded up the city's best and hippest women's boutiques. Well, here you go.

Acoté
This two-year-old Hayes Valley offshoot of the pricier French brand Cotélac (which has a store in Pac Heights) is already a mainstay for Hayes Valley shoppers. Known for their simple cuts and timeless style, Acoté often features edgy and bold textiles that appeal to whimsical tastes, and creating looks befitting of effortlessly fashionable French women on the go. Also, the salespeople here generally get high marks on Yelp.  Jay Barmann
597 Hayes Street at Laguna 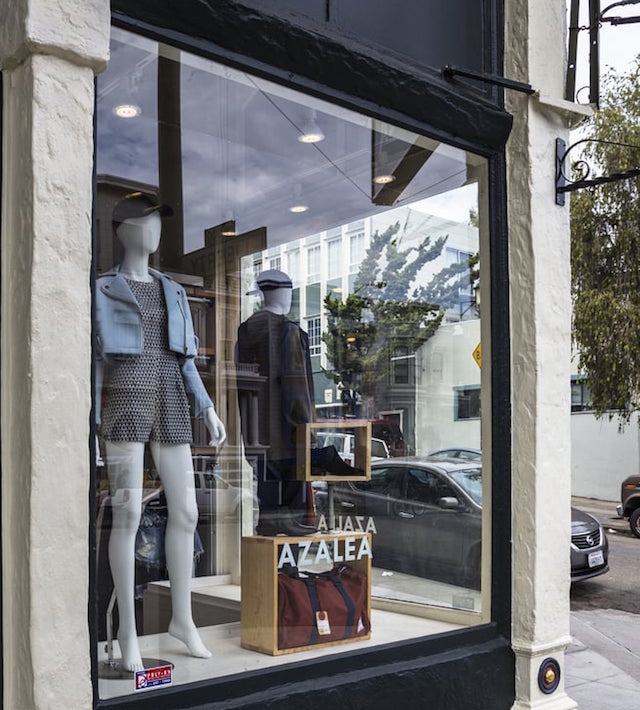 Azalea
With two San Francisco locations (and a third in Berkeley), Azalea is a go-to boutique for recent women's and men's fashions, sometimes of the faster, cheaper variety. They'll have you covered on brands and designers from APC to Comme Des Garcons, and for women, they've got their own line of basics, comfy sweats, and even outerwear. Azelea's also a good bet for accessories and bags, and the friendly staff will be more than happy to get a fitting room started for you and all that.—Caleb Pershan
956 Valencia Street between 21st and Liberty Streets and 411 Hayes Street between Gough and Octavia Streets 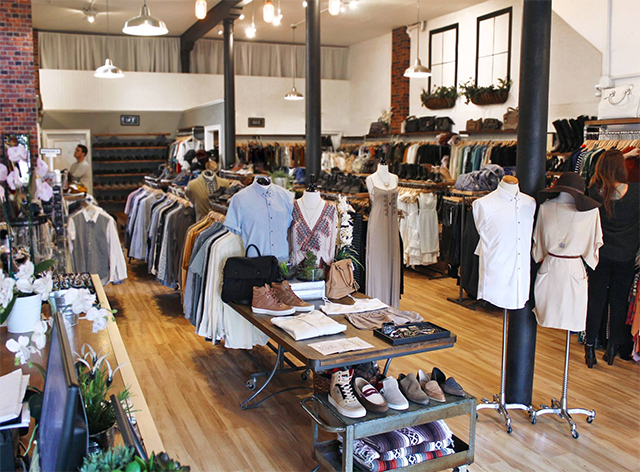 Cary Lane
This designer sample outlet boutique began with a Noe Valley store nearly a decade ago, relocated to Hayes Valley, and now has two other locations in the Mission and the Inner Sunset. Catering to both men and women, the store specializes in designer-label samples and past-season items, discounted up to 80 percent off of retail, as well as jewelry and accessories, and customers tend to love the bang for their buck here, and the selection.  Jay Barmann
560 Laguna Street at Hayes; 3153 16th Street at Valencia; 1262 Ninth Avenue at Irving

The Everlane Lab
Everlane's philosophy/schtick is radical transparency: They break down their every cost for you, and as most of their sales are done online, their low overhead is paid forward to the customer. But here in SF, their Everlane Lab is one of just two places to try their styles on for size in store (the other, if you even had to ask, is in SOHO in New York). Everlane's line, which is on the minimalist, functional side, features everyday basics and office-friendly outfits as well as trendier pieces and even sleek, modern women's Oxford shoes and boots. A smaller men's line, also available in store, is there to keep boyfriends busy. —Caleb Pershan
2170 Folsom Street between 17th and 18th Streets 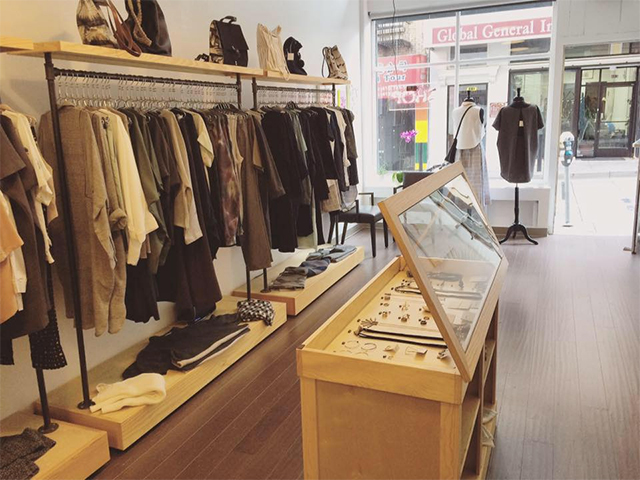 Legion
Situated on the edges of the Financial District and Chinatown, Legion and its owner Sydney Pfaff have been getting high marks for curation in the three years since the store opened. Pfaff specializes in hip, little known, often local labels as well as excellent smaller gift items and jewelry, and she's always happy to help customers find something to suit them.  Jay Barmann
678 Commercial Street 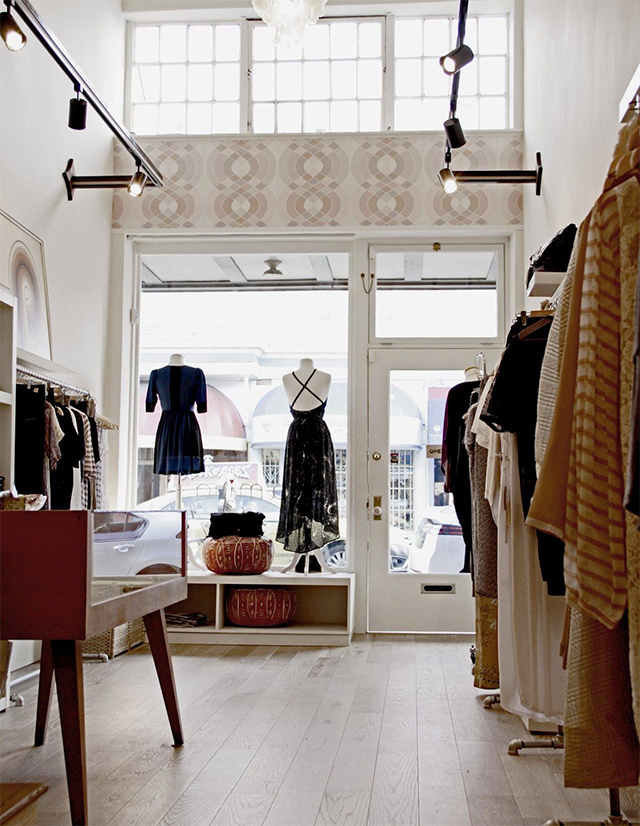 Mira Mira
Another neatly appointed, perfectly curated spot, this tiny Mission boutique features unique, youthful, and eclectic pieces, all of high quality, at fairly reasonable prices  sale items start at around $30 and dresses top out at $250. Mira herself, the store owner, is often on hand to help, and shoppers here tout the jeans as well as the jewelry too. The store's blog is filled with art, almost like a Pinterest board, and will give you an idea of Mira's hip/ster esthetic.  Jay Barmann
3292 22nd Street at Valencia 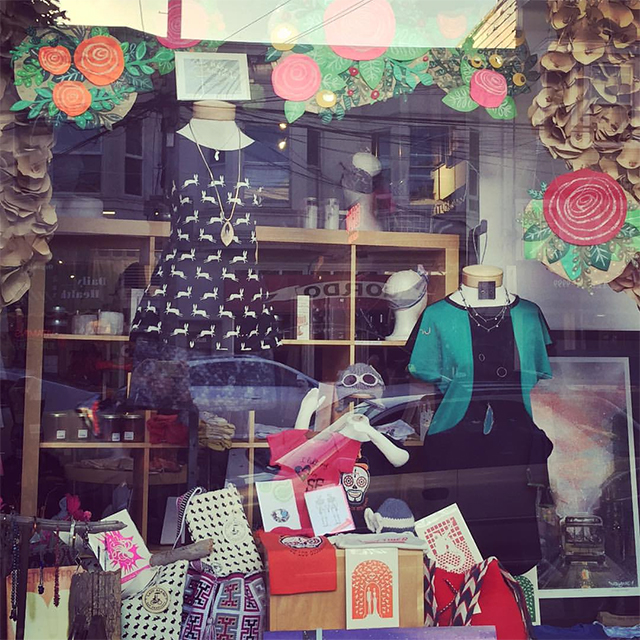 Paragraph
This Inner Sunset boutique relocated to the neighborhood in 2007 from Glen Park, where it began a few years earlier, and proprietor Vanessa Viray-Carlos stocks the place with unique women's clothing as well as tons of gift items, accessories, and more SF-specific stuff like Bay Bridge t-shirts, Warriors and Giants gear, and Dia de los Muertos-themed swag. It's a friendly, family-owned business with plenty of charm, and serves as a showcase for local designers as well.  Jay Barmann
1234 Ninth Avenue near Lincoln 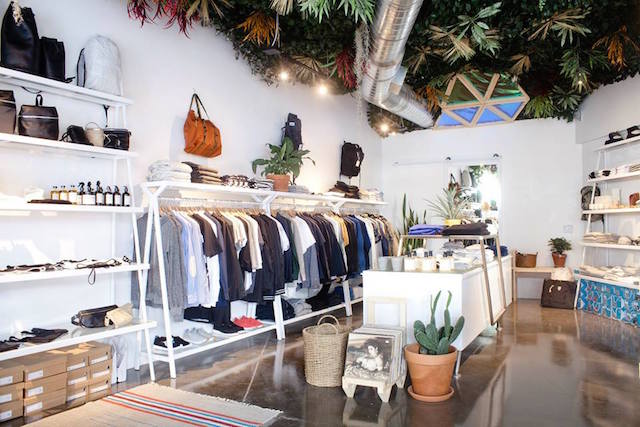 Revolver
Revolver's cosmopolitan clothes are carefully curated and their delightful space makes for a fun, gallery-chic shopping experience. Expect to find local designers clothing stocked alongside more well-known international brands, and to perhaps lose track of which is which. For reference, these are the same folks behind Voyager, with locations in Los Angeles and in SF on Valencia Street. —Caleb Pershan
136 Fillmore Street between Germania and Waller Streets 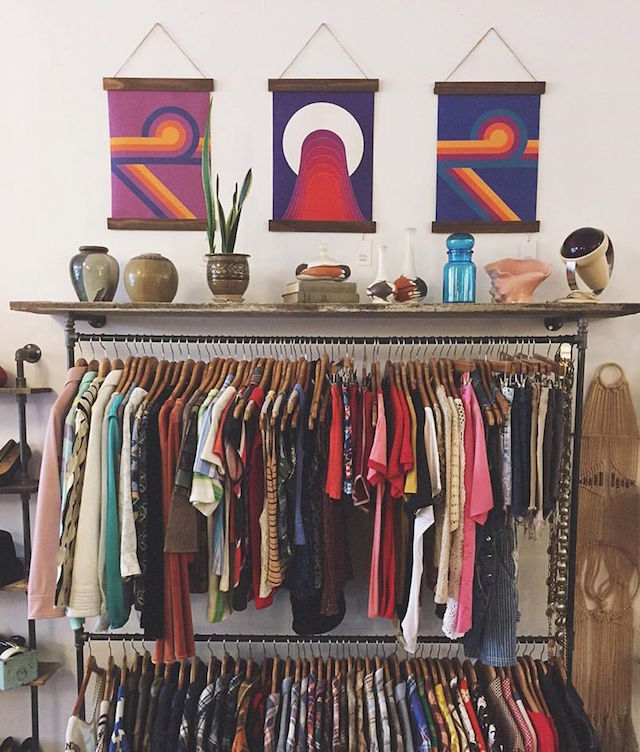 Wallflower
Wallflower has made a name for itself since 2015 thanks to its warm, non-pushy customer service and cool, hand-picked treasures. A vintage boutique, at Wallflower you'll find good prices on classic and throwback pieces. In need of crystals, gems, or succulents? Wallflower has those perks, too. —Caleb Pershan
1176 Valencia between 22nd and 23rd

This is no ordinary whale watch in the Monterey area. Instead, it's what could be a life or death rescue mission. A gray whale last sighted off Piedras Blancas on Wednesday and expected

It's been more than six months since we heard wind of the fact that Lazy Bear chef-owner David Barzelay was plotting a craft cocktail bar with the restaurant's bar director Nicolas Torres. Now

—
The Nine Best Women's Clothing Boutiques In SF
Share this