A new image search function created by SFMOMA makes Google image search look like a service for philistines. Art enthusiasts with some free time on their hands and no one to text are encouraged to send requests for images to SFMOMA's new, still in beta testing, "Send Me SFMOMA" project at 415-796-0446.

The project was created by SFMOMA's Jay Mollica, who sent it along to SFist so more people could test it out. "My role as Creative Technologist involves exploring and interrogating emerging technologies as well as supporting SFMOMA's existing digital platforms," Mollica says. "One of my goals is to bring SFMOMA's collection to the public in new and perhaps unexpected ways, and hopefully encourage further exploration."

Just type "send me ____" asking for anything you please, and you're likely to get an image back with the artist name, title, and date. 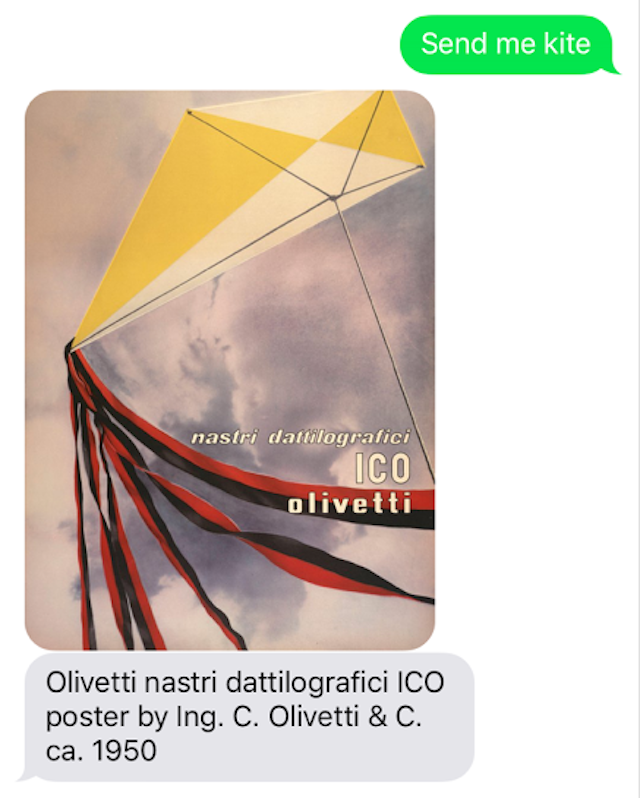 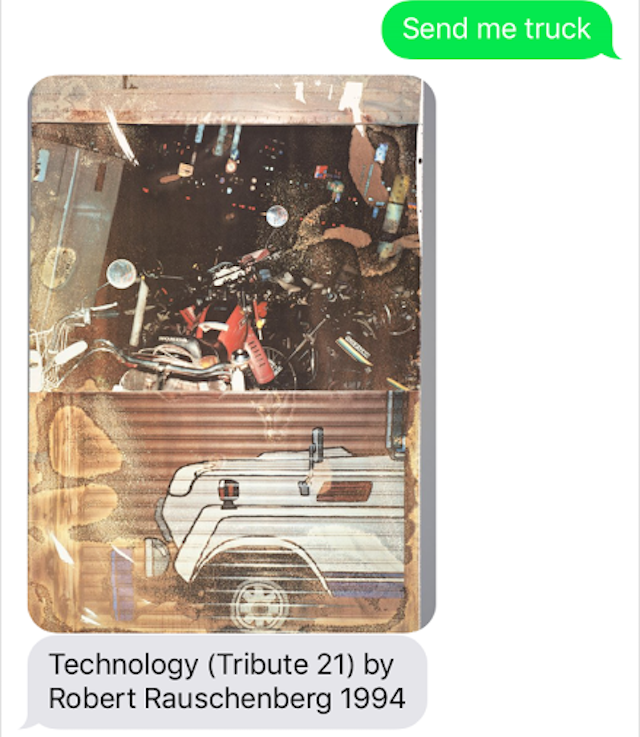 You won't find any Matisse images by searching for the artist by name, though — and that's intentional. "Most people search for art by asking for names of familiar artists or artworks, so I made Send Me SFMOMA hoping to provide people with a fun way of discovering artworks they may not have previously known about."

For anyone looking to learn more about what art they're sent, any piece returned by Send Me SFMOMA can also be found on www.sfmoma.org. 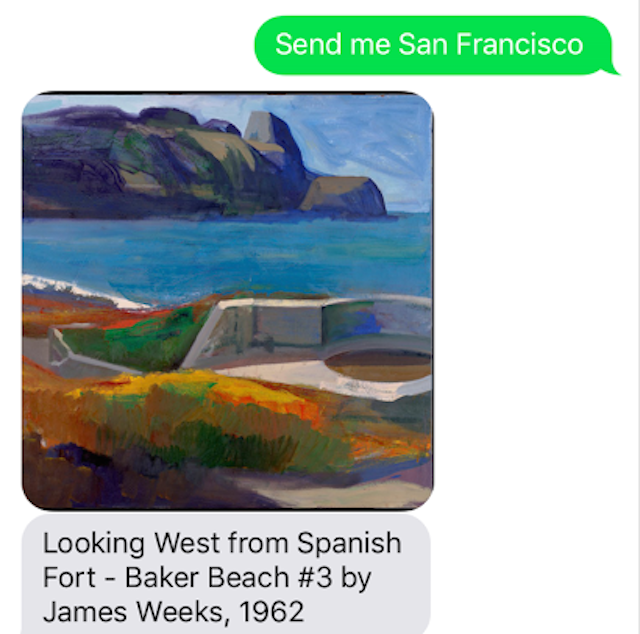 How it works: "SFMOMA has an API that includes metadata for over 30,000 artworks in the collection," Mollica explains. "If you've got some technical chops and want to access the API you can visit this URL: https://www.sfmoma.org/api/collection/ for more instructions. We've previously published an article about our API here: https://www.sfmoma.org/read/why-build-api-museum-collection/."

There were some hiccups — such as this search: 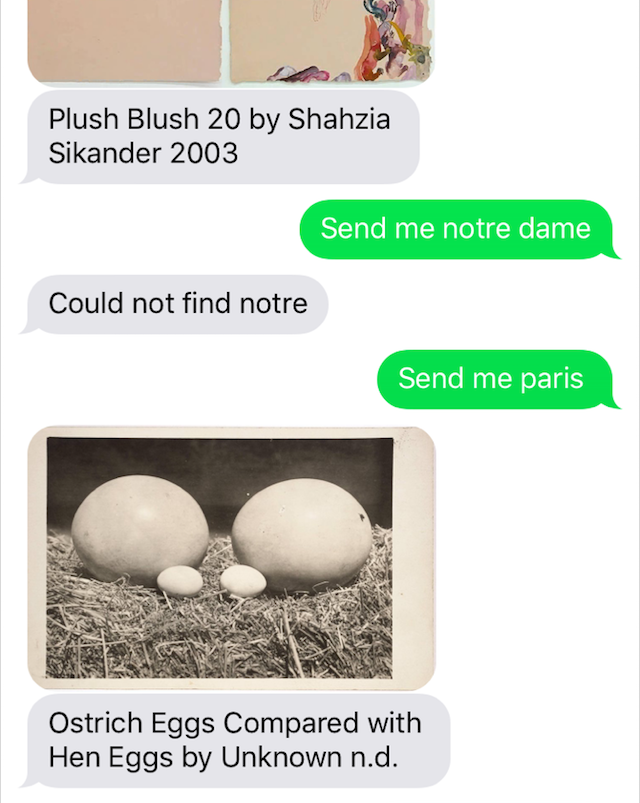 But in other cases, Send Me SFMOMA worked all too well... 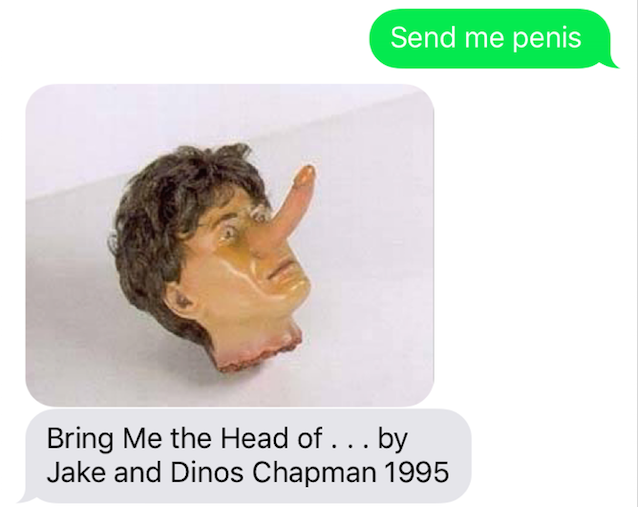 A search for keywords "Donald Trump" even turned up an image that reads well as commentary: 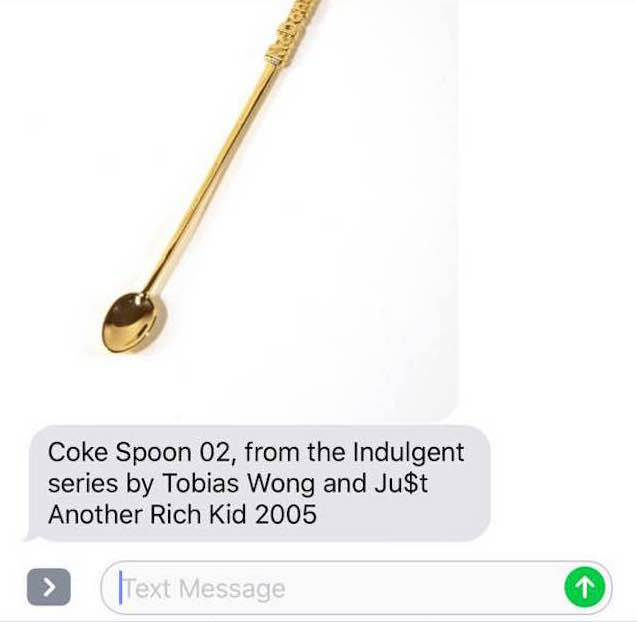 We asked Mollica about that one, and he called it "certainly unexpected." HIs explanation: "So as I've mentioned earlier the search is not based on artwork title or artist name. The search is based on descriptive keywords. In this case the word "donald" was found to be part of the descriptive keyword "MacDonald's" so it was a 'match' in that sense. I'm not really interested in causing controversy here, so maybe I should take out that response!"

Sure, you could say this service is still in beta — but you could also claim it's achieved a shocking degree of artificial intelligence, depending on your political persuasion.

Anthony Levandowski, an Uber executive whom CEO Travis Kalanick once called his "brother from another mother," is asserting his Fifth Amendment rights in a lawsuit filed by his former employer, Google. Levandowski's lawyers

—
Text This Number, And SFMOMA Will Send You Images From Its Collection By Keyword
Share this