Rather than sport a lawn sign for a real political candidate, one Castro District home near Market Street has erected a large reproduction of the 1992 Zoe Leonard poem "I want a president." The poem is a popular indictment of the "clean" politicians who wash their hands of real, striving, suffering constituents: Leonard's poem asks why "a president is always a clown: always a john and never a hooker. Always a boss and never a worker, always a liar, always a thief and never caught."

Leonard, born in 1961, is a photographer and sculptor, and her famous poem was inspired by another feminist activist and poet Eileen Myles, who indeed ran for president as an independent and an "openly female" candidate in 1992. 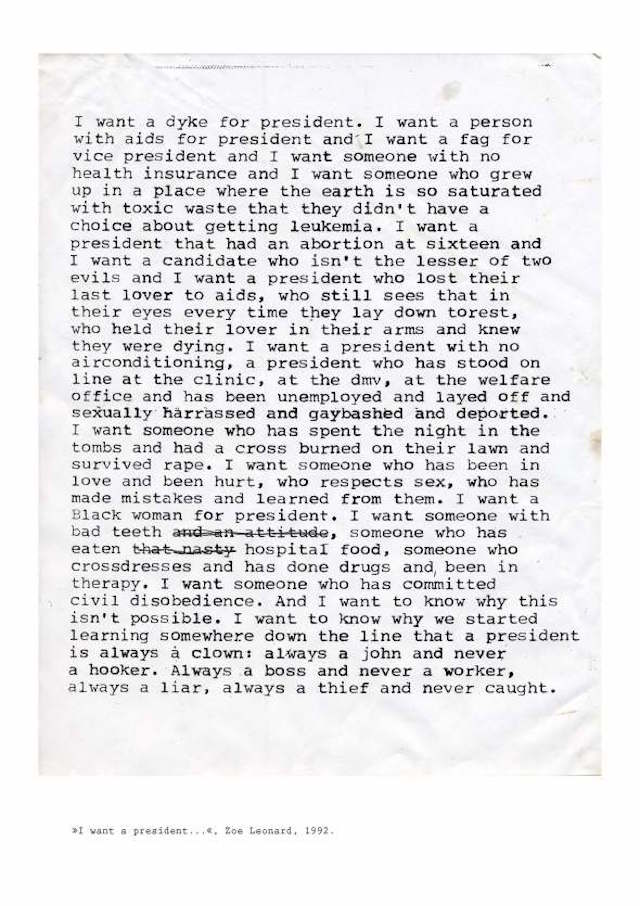 In 2016, "I want a president" became an art installation in New York City along the High Line. Covering that event, Vice recalled that the poem was "originally meant to be published on the back of a queer magazine that went under. Instead, Xeroxed copies were passed along to friends, who put them on their refrigerator doors, and then later replaced them with postcards after the art journal LTTR printed some in 2006." According to Vice, "given the way that the piece spread organically, it's something like a pre-internet meme."

That said, you've possibly seen it on the internet by now, especially in light of current presidential politics. A friend of writer Broke-Ass Stuart also sent him an image of the Castro poem home, and Stuart weighed in, writing "I was feeling [the poem] especially hard during the election, considering neither candidate seemed to be in touch with marginalized people." However, Eileen Myles, for whom the poem was written, endorsed Hillary Clinton in that contest.

In the Castro, "I want a president" is even illuminated by night for passersby, as are a cool set of stairs to this small, gorgeous home.

via I want a president.. An Action/Collective reading project

35-year-old Alex Quintana, the victim in last week's savage beating by a group of motorcyclists involved in a sideshow on Highway 101 in San Francisco, is speaking out from his hospital bed and

—
Photo Du Jour: Poem Outside Castro Home Declares 'I Want A Dyke For President'
Share this