Brace yourselves for more potential drama as California's Department of Water Resources once again tests Mother Nature's kindness and begins releasing more massive amounts of water down the Oroville Dam spillway next week. The dam's floodgates have been closed since February 27 in order that work crews could clear debris that had collected around the bottom of the spillway and downstream along the Feather River, however the significant damage to the spillway itself remains and will likely lead to further erosion of the adjacent hillside as water releases are set to begin again on or around March 17. Fixing the spillway, which can't begin until after spring runoff ends, is expected to cost over $200 million.

According to the Sacramento Bee, DWR acting director Bill Croyle has set a "comfort level" of around 860 feet for Lake Oroville, which is well below the reservoir's capacity of 901 feet at which point water begins spilling over the also damaged emergency spillway. By next week, due to rainfall and continued runoff from the Sierra, the reservoir is expected to hit 865 feet.

As explained in this video from last week, the Department of Water Resources has been working steadily since the shutoff of the spillway to remove debris from the channel below the spillway, essentially making room for more to land there, but also allowing for operation of the dam's power plant, which is expected to ease some of the burden on the spillway come spring, with a capacity to release 14,000 cubic feet of water per second from the reservoir as it continues to fill. As of Wednesday, workers had removed about 620,000 cubic yards of material out of a total 1.7 million cubic yards that they hope to remove. 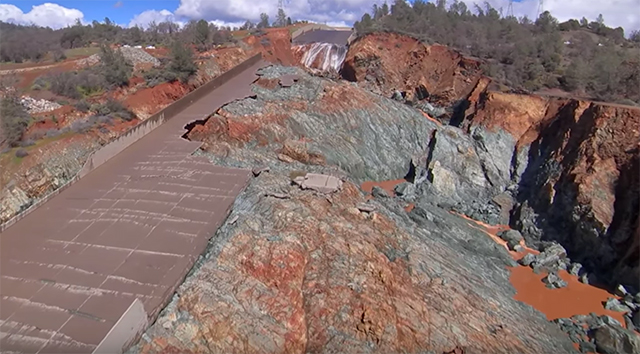 As the Mercury News reported today, ongoing repair costs for the dam and spillway are estimated right now at $4.7 million per day, with 160 Department of Water Resources employees and anywhere from 300 to 500 contractors at work each day. The state expects between 75 and 90 percent of that cost to get reimbursed from FEMA.

Secondary impacts of new releases from the damaged spillway are yet to be known. We already know that the salmon population that typically uses the Feather River for spawning has been greatly impacted, and that numerous farms along the banks of the river south of the dam have lost land due to sloughing  this was due to waterlogged soil being held up by rushing waters in previous weeks collapsing when the river level abruptly dropped after the February 27 spillway shutoff.

Clearly state officials are hoping to avoid another crisis like the one they had on the evening of February 12 when an emergency evacuation order went out to the 180,000 people downstream of the dam after erosion damage threatened to cause the collapse of the 1700-foot-wide, 30-foot-tall emergency spillway, which had been put into use the day before for the first time in the dam's near 50 year existence.

As part of the ongoing emergency repair work, many tons of rock have been dumped into the eroded area below the emergency spillway in case it needs to be used again this season, per the Mercury News.

Cross your fingers, everybody!

Not all Irish bars are created equal, despite how similar many may seem. San Francisco, having had a long history of Irish immigration and a continuing strong relationship with the country  including annual

A San Francisco neighborhood already smarting from a wave of burglaries and the subsequent release of the suspect has another reason to be on the lookout today, after yet another break-in netted a