A lot of punches were thrown and unnecessary acts of violence committed at last Saturday's pro-Trump rally at Berkeley's Martin Luther King Jr. Civic Center Park, and now police are asking for the public's help in identifying six men who remain at large who were caught on video throwing some of those punches. 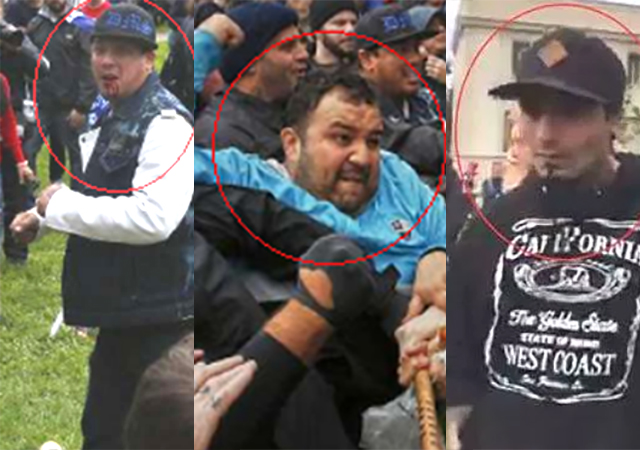 It was reported last weekend that a couple hundred people took part in the rally and consequent counter-protest, but perhaps only 60 or so were actually pro-Trump supporters who were then attacked by a far greater number of black-clad anarchists and others, though it's unclear which side of the political spectrum the men above belong to. Police say they can't know how many participated in the rally because there was also a farmers' market happening simultaneously nearby.

There's some more footage from the chaotic melee below, which began around noon last Saturday, two hours before the scheduled rally was set to start, and extended until after 5 p.m. when crowds dispersed.

As ABC 7 has it from the police, "Some [of the men] reportedly inserted themselves into confrontations with those with opposing views."

Anyone who was assaulted at the event is being asked to fill out a police report and any other witnesses who can identify any of the men above are asked to contact Officer J. Friedman at the BPD at (510) 981-5990, ext. 4202, or [email protected]

Police are looking for two men who robbed a mother with her one-year-old daughter at gunpoint in San Francisco last Friday. [KRON 4] You can live in this teeny-tiny condo with what appears

Well here's an unsettling tale about a would-be Christian who made himself unwelcome at a number of Bay Area churches by skulking around and being way too friendly with underage girls. As CBS