Google/Alphabet has been at work on a highly ambitious, enormous new addition to its Googleplex campus in Mountain View, this one dubbed Charleston East. We first heard about it two full years ago as being a large, glass-canopied space with modular pieces inside, designed by Danish architect Bjarke Ingels and London-based Heatherwick Studio. Two years on, the design has been downsized, and the glass canopy nixed  maybe they realized there was no feasible way not for it to become a hothouse?  and as CBS 5 reports, the company just received final city approval for the project, which begins construction next month and will take about two years to complete.

The design, as you can see above and below, remains unusual and circus-tent-like, with that canopy transforming into a more traditional, if audaciously contoured roof. Company rep John Igoe tells CBS 5, "It came about because we really started designing from the inside out. We wanted to find out how we could get a space to be very, very flexible and that wouldn’t have a lot of walls and the typical type of restrictions you have." 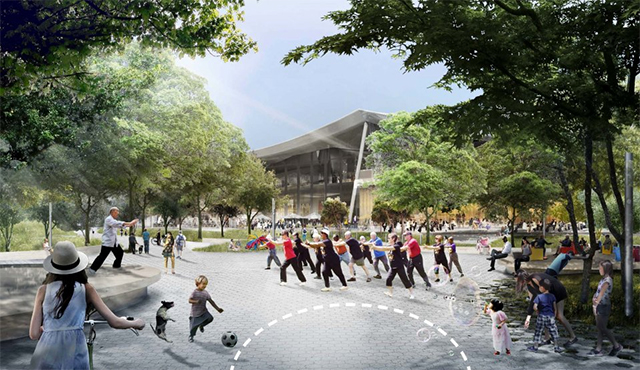 Business Insider explains that the building has its own internal climate regulation, air quality regulation, and it keeps itself from becoming too loud inside.

Earlier we had heard that the canopy was going to generate its own electricity, which may still be true. Also, as of 2015, "Google imagines stationary steel support columns upon which lightweight, modular building pieces can be inserted, removed, raised or lowered at will. Think of the floors sort of like oven racks; the walls between them can be added, or not. Crabots (which Google calls "a range of small flexible and manageable cranes and robotic machines") would lift and move these building segments around almost like furniture." It's unclear whether all of that is still in the works on the interior.

Also what's different about this campus from the company's existing one is that they're planning to try to integrate it more into the local community, creating new trails and green spaces that are publicly accessible and encouraging its use by the community, as seen below with the rendering of a tai-chi class. 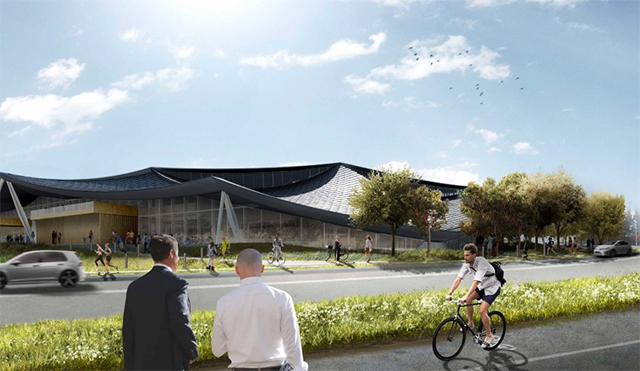 Two ex-convicts have been charged with attempted murder in connection with an incident in which shots were fired at an off-duty Oakland police officer. [Bay City News] Lyft offers ride hailing for developers

Eight different courses and 122+ hours of expert instruction. It's not too late to join the elite (and well-paid) ranks of full-stack developers out there: pick up this Pay What You Want: The