Bridge on Highway 1 south of Monterey has pretty much given up ... canyon slid & ground shifted https://t.co/hmwakkBfCx

Big Sur was hit hard last year by the months-long firefight and road closures necessitated by the Soberanes Fire, and this winter's epic rains and frequent mudslides have only made things worse, particularly for tourism, but also for residents who are increasingly isolated. That's only going to be worse after Caltrans concluded this week that the buckling Pfeiffer Canyon Bridge on Highway 1, just north of the popular Julia Pfeiffer Burns State Park, is now beyond repair, as the SF Chronicle reports, which means the highway is now closed in both directions indefinitely. Replacing the bridge, the supports of which have been steadily sliding into the creek below, could take up to a year to replace  though perhaps some temporary structure can reopen the highway in a few months?

The road has been essentially closed since February 12, and other sections of Highway 1 have been closed by mudslides previously, all the way down to Gorda to the south. And for large stretches of the highway, there are no other roadways in and out due to the ruggedness of the Santa Lucia mountains to the east.

The LA Times reports that guests at the pricey Esalen Institute have been stuck there over a week, and they now have to be evacuated by helicopter, which began Friday morning. Also, the tony Post Ranch Inn announced on its website that it is closed and hopes to reopen in April. Meanwhile, part of their property is being used as a helipad, and they're helping to house emergency services personnel.

The Big Sur River Inn, north of the bridge, hopes to reopen after power and phone service are restored and another road closure to their north is cleared. For the time being, they posted to Facebook that they were opening to locals only for brunch today, cash only.

The Google traffic map below shows the closure spots, and the entire section of the highway that remains traffic-free. Check this constantly updated Caltrans map of road closures for updates if you plan to head to the area.

See the location of the damaged bridge below. For the indefinite future, and only once the rest of Highway 1 reopens, traffic from the south can only go as far as the bridge, and traffic from Monterey can not continue past it. 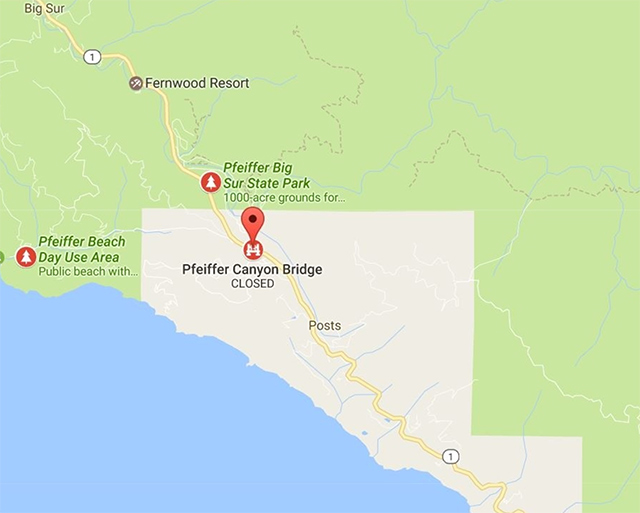 A section of Highway 1 was expected to open for several hours Friday and Saturday only to allow limited local traffic into the Big Sur area south of the bridge, from San Luis Obispo, only to bring supplies to residents in the area, according to the Mercury-News.

The cause of all the chaos is that during February, while much of the Bay Area has suffered an intense amount of rainfall, Big Sur has seen 1,150 percent of its normal February average. This has contributed, as Caltrans’ structure representative David Galarza tells the Mercury-News, to a rapid landslide in Pfeiffer Canyon, which is actually "part of a huge, ancient slide with a smaller slide within it" that created the canyon itself. That's meant that concrete support beams of the bridge have been quickly losing ground and Caltrans is hoping that they can now perform a controlled demolition of the bridge, rather than letting it collapse on its own.

"The more controlled [the demolition will be], the safer it will be for everyone,” Galarza told the paper. “If it starts falling in an uncontrolled manner  it could land in all kinds of different positions and actually make our work harder to try to recover the pieces that are down in the creek.”

KSBW has several dramatic images of the buckling bridge, and there are more below. They report that "Highway 1 is also closed at Crab Lab, four miles south of Carmel Highlands" and the road closure is due not just to the condemned bridge, but also due to "an excess of 30 mud slides, downed trees, standing water, downed power lines."

There's no going in and out of the heart of Big Sur for now, unless you go by helicopter  the Mercury News reports that one-way trips out of Big Sur to the airport in Monterey cost $780, from a company called Specialized Helicopters.

Monterey County Supervisor Mary Adams posted to Facebook this week, "I have lived on the Monterey Peninsula since 1965 and have never seen a winter as severe as this one. Our primary concern is for the safety and well being of residents, businesses, and the many workers who have come from around the State to assist us in this time of great emergency."

In the tech mecca of the Bay Area, Hack Temple seeks to be among its highest, holiest altars. The new would-be place of worship is located in the historic Our Lady of Guadalupe

A Concord man has been arrested in connection with having sex with a 12-year-old girl and fathering her child, according to police. [Bay City News] Seven-story building planned for 1245 Folsom moves closer

—
Photos Show Condemned Bridge That Promises To Shut Off Big Sur Tourism Yet Again, For Months
Share this