BART's Fleet of the Future, 775 shiny new train cars that have caused their share of delays and debates in the past, have arrived with a brand new problem: They're a ton overweight, and that, alas, is no figurative overstatement.

According to a new report from NBC Bay Area, the fleet, which is expected to go into service this year following testing, has cars that are a half-ton to a full-ton heavier than specified under BART's contract with manufacturer Bombardier, presenting a situation that could further strain the regional transit system's infrastructure, particularly its aerial structures.

The root of the problem: BART’s operations manager Paul Oversier says that lots of safety gear, bike racks, and other "bells and whistles" all added up in expected ways. "A lot of stuff that I think the customers are really going to appreciate... has contributed to the weight issue," he tells the news channel.

While expressing confidence and optimism, the agency has commissioned outside engineers to inspect 30 aerial structures — elevated highway overpasses and the like — to ensure their safety under the added weight. 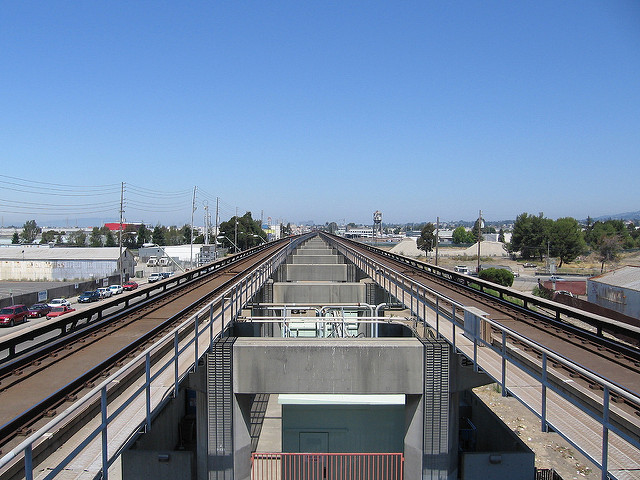 Outside agencies performing inspections of these structures is nothing new. As early as 1980, NBC Bay Area finds, an outside engineering firm called Tudor Engineering Co. told BART that five percent of its aerial structures failed nationally accepted standards. Tudor pointed to two Highway 24 overpasses in Oakland, for example. But in the end, the firm agreed that the ultimate limit of fully loaded BART trains could be 55 tons, up from a previous 50-ton limit, which is where it still stands today.

Again, in 2011, BART asked Jacobs Engineers of Walnut Creek to take a look at its aerial structures. "Stress corrosion coupled with fatigue is a definite cause for concern," Jacobs observed. The report highlighted structures that crossed above Chabot Road and Golden Gate Avenue and also drew attention to spots on the Walnut Creek section of the Pittsburg/Bay Point line where trains cross over 680 and Highway 24. "Due to its inaccessibility, the structure is not being inspected to the degree that is required," Jacobs wrote of that area, pointing out aerial structures there hadn't been inspected since 2000.

Putting this BART weight issue bluntly, Bob Bea, a UC Berkeley emeritus professor of engineering, tells NBC that "running heavier trains is simply putting more demand on the system, which is not a good thing." Harsh.

BART seems fairly unconcerned in these matters, with engineers telling NBC that their structures all meet state highway standards and that they have plenty of confidence despite the 2011 Jacobs report in the 24/680 overpass. As to the Oakland structures, an engineer's letter from last month says the structures could be good for as long as 144 years to come.

For now, as outside engineers survey aerial structures, BART may send Bombardier back to the drawing board, at least as regards the "bells and whistles."

"There’s a lot of engineering behind those ideas," Oversier said of those, "and we’re working with [Bombardier] constantly to see which ones BART is willing to live with and which ones we feel aren’t worth it ... because there may be an impact on reliability, long-term maintainability, whatever."

Related: Video: Hear The New BART Horn, And Get An Up-Close Look At The New Car's Interior

When San Francisco Police Department Chief Bill Scott was sworn in last month, law-watchers assumed that (like any other new boss), we'd see a shakeup and departures in the current command staff. Contrary

Need of the hour! More glitter less Twitter! #Ashish #LFW pic.twitter.com/6agZ4yJanF— Manish Mishra (@dandydujour) February 21, 2017 Like the hours after 5 p.m., it feels like it is always

—
Weight Problem: BART's 'Fleet Of The Future' Cars Are A Ton Heavier Than Expected, Could Strain System
Share this