Crowds of incontestable size spelled out "Resist!!" with their bodies this morning while sitting and standing on the sands of Ocean Beach. The message, aimed at what many perceive to be an increasingly authoritarian American government, was organized on Facebook by Brad Newsham of Oakland who began creating such visual events in 2006 and commissioned a helicopter photographer for $1,000 an hour for the event.

"I'm 65 years old, I should tell you I got a new hip since the last one," Newsham told SFist by phone as he was leaving the Ocean Beach adjacent Beach Chalet restaurant. His last message was "Tax the 1%" and his first was a call for the impeachment of President Bush. 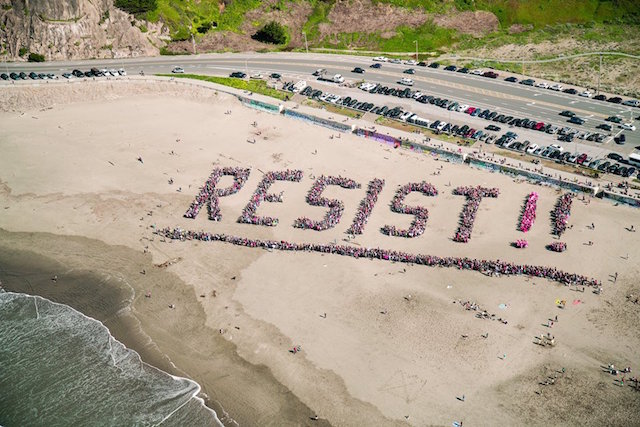 "When I first started organizing these, the park service was leery of me," Newsham says. "As they should be — I was calling for the impeachment and the imprisonment of their bosses... I had to go through a lot of hoops."

Newsham estimates that today's attendance was more than 4,000. In the past, he's advertised that overflow attendees could form an underline beneath his messages. That's never happened before, and Newsham calls the wording "optimistic." But this time, there were more people in the underline than at any of his previous events, Newsham believes. 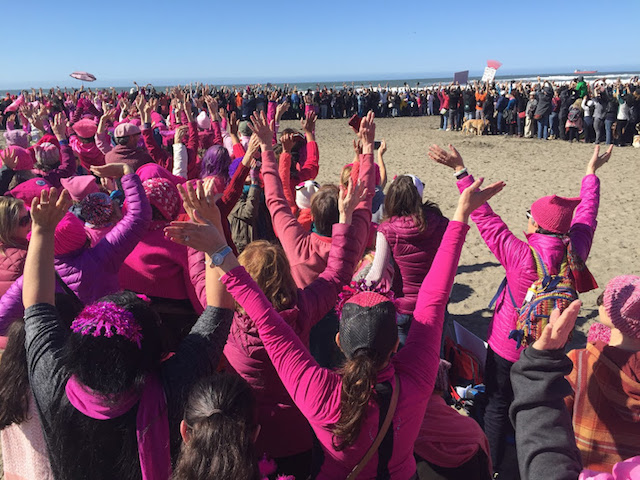 At Ocean Beach this morning to RESIST Trump — what did you do this morning? pic.twitter.com/BnVuyFKc1x

San Franciscans have been coming out in force in the past weeks with similar messages of resistance and persistence, donning purple and joining hands across the Golden Gate Bridge on Inauguration Day, for example. Another group lead by San Francisco Green Peace representatives were arrested for hanging a banner from a crane that also read "Resist" on January 25.

A major train derailment that thankfully did not injure anyone occurred on Friday afternoon at about 12:45 p.m., sending 22 cars of the Union Pacific freight train into the Cosumnes River,