Earlier this week, and as expected, the San Francisco Arts Commission unanimously approved a final inscription for a memorial to the women who were sexually enslaved by the imperial Japanese army during WWII, a group usually referred to as "Comfort Women" based on the cruel euphemism once used to describe them. The Comfort Women Justice Organization, led by retired San Francisco Superior Court judges Julie Tang and Lillian Sing, is the driving force behind the privately funded memorial, and announced news of the inscription's approval. They plan to have the small monument built this fall in an extension of St. Mary's Square at the corner of Pine and Kearny. The inscription:

This Monument bears witness to the suffering of hundreds of thousands of women and girls, euphemistically called Comfort women, who are sexually enslaved by the Japanese Imperial Armed Forces in thirteen Asian Pacific countries from 1931 to 1945. Most of these women died during their wartime captivity. This dark history was largely hidden for decades until the 1990s, when the survivors courageously broke their silence. They helped move the world to declare that sexual violence as a strategy of war is a crime against humanity for which governments must be held accountable. This memorial is dedicated to the memory of these women, and to eradicating sexual violence and sex trafficking throughout the world.

Historians like South Korean professor Park Yu-ha say that "at least tens of thousands" of women, many of them Korean, many Chinese, were enslaved during the period of the early 1930s to 1945. 238 of them have come forward in South Korea, although only 40 of them are still alive, in their 80s and 90s according to the New York Times. As the crimes are a source of tension between Japan, Korea, and China, scholars like Park Yu-ha have faced repeated defamation for their work to publicize and contextualize the Comfort Women. A statue depicting a comfort woman outside the Japanese Consulate in Busan, South Korea, as the Times wrote in January, was removed by police amid protests, then later reinstalled,.

San Francisco has entered the fray in the past, fighting back against the mayor of Osaka, an SF sister city, who once called the system of enslavement and rape "necessary to maintain discipline" at the time in Japan, passing a symbolic resolution condemning his remarks. Osaka's Mayor canceled a trip to San Francisco at one point, and later, the Board of Supervisors approved the Comfort Women memorial here in 2015 over his objections.

But those objections kept coming, many of them in the form of emails denying the very premise of the Comfort Women. Those were sent to my inbox as well as to other writers who had covered the memorial efforts in San Francisco and were addressed to members of the SF Arts Commission. I counted more than 200 of them. These emails came mostly from unknown email addresses, some of them signed with names and addresses in Japan, and are clearly part of a concerted campaign, although they're not quite form letters or spam.

"[A] comfort girl is nothing more than a prostitute or professional camp followers attached to the Japanese Army for the benefit of soldiers," one email that might stand for many alleges. They had a phonograph and in the towns they were allowed to go shopping. Can you call it slavery?"

Other remarks dismissed the idea altogether or call into question the necessity of memorializing the period as it could cause present day international tensions. 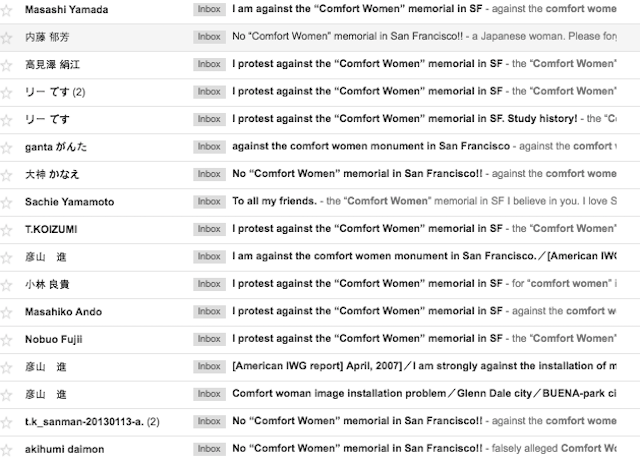 That's in keeping with a long history of what the Comfort Women Justice Organization calls a system of "organized, official distortion and denialism." As they write on their website, "There is a systematic attempt at permanent erasure of WWII-era atrocities (including the Nanjing Massacre and Japanese military sexual slavery), spearheaded by Japan’s highest levels of government and the Prime Minister himself. The current government is actively working to distort its own troubled past in Japan and around the world, in particular, the ‘erasure’ of Comfort Women issue, as part of a global campaign to “improve Japan’s image.”"

President Donald Trump, who apparently has nothing better to do, is sending shock waves through the retail world Wednesday, as some retailers dump his family's products and others desperately curry favor with the

When it rains, turn to ramen. Iza Ramen, which grew from a pop-up into a brick-and-mortar with their Fillmore and Haight location in October 2015, is set to open a second outpost just