Following reports that Uber was still operating to and from JFK Airport in New York on Saturday during a taxi strike in response to Trump's immigration order, a call went out on social media with the hashtag "#deleteuber" prompting an unknown number of people to delete the ridehail app in solidarity with the immigration protests.

Uber appeared to be making trips to JFK between 6 and 7 p.m. on Saturday, during the hour that the NY Taxi Workers Alliance had called for the strike, as Business Insider reports. Uber, however, denies that they were operating during the strike.

The company did not try to capitalize on the strike through surge pricing, and they say that the tweet below was simply meant to alert customers that Uber was still an option, without surge, in the hour after the strike.

Surge pricing has been turned off at #JFK Airport. This may result in longer wait times. Please be patient.

Uber issued a statement to Business Insider Saturday in response to the uproar saying, "We're sorry for any confusion about our earlier tweet  it was not meant to break up any strike. We wanted people to know they could use Uber to get to and from JFK at normal prices, especially last night."

Also, if you tried to delete your Uber app last night, you may have received the following notice from their customer service department. 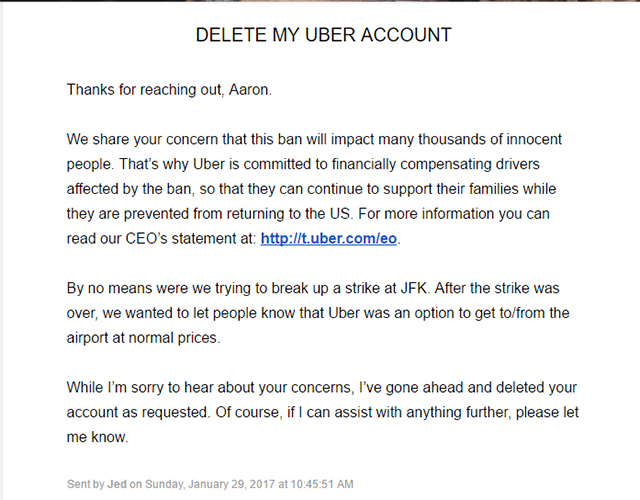 The statement from Uber CEO Travis Kalanick was posted to Facebook Saturday afternoon, and he vowed that he would be bringing up his issues with the President's executive order at a meeting he has with him this Friday in Washington. Also, Kalanick says that the company is aware of many foreign-born drivers from the affected countries who go abroad for extended periods to visit family and now may not be able to return to drive for Uber. "We are working out a process to identify these drivers and compensate them pro bono during the next three months," Kalanick wrote.

Meanwhile, Lyft just announced that they've donated $1 million to the ACLU. So, your move, Travis.

Slumber is serious business—whoever said that sleep is for the weak probably lived with a not-so-great mattress. Sound like a familiar problem? Then it might be time for a mattress upgrade. For

Protesters are set to descend on the International Terminal at SFO for the second day in a row, at noon on Sunday, to express their outrage over Donald Trump's actions with regard to

—
As Thousands Delete Their Uber Apps Over JFK Story, Uber Denies Trying To Break Up Taxi Strike
Share this