The revolution will be tweeted from within! The latest development in President Trump's Week One internal war with government agencies that don't seem to like him much is a statement from Press Secretary Sean Spicer pointing the finger at a San Francisco branch office of the Department of Defense for causing one "inappropriate" tweet that implied the President's Twitter use might signal an issue with his mental health. The Associated Press reports that a quick internal investigation turned up an "unauthorized user," according to Spicer, using an old password for the DOD's Twitter account to post the tweet on Monday, which was "in violation of [the department's] policy."

The tweet, screencapped below in case it gets deleted from Twitter in the coming hours, pointed to a DOD article published last Thursday by a medical expert about the mental health benefits of social media. 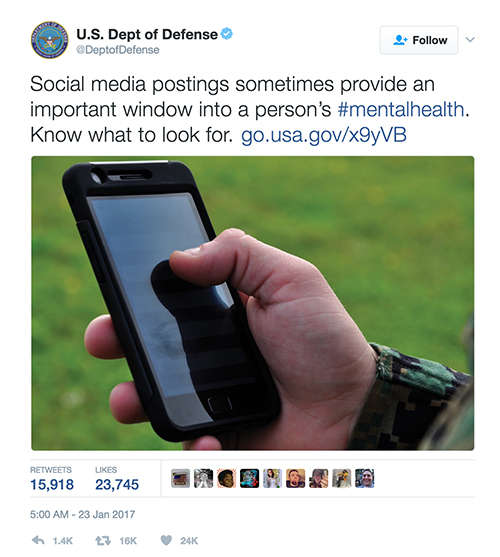 Since it was mostly just a routine promotion of a recent department article, albeit one with some shade-throwing implications in the wording, it seems unlikely that this was the work of someone who didn't work for the DOD any longer using an old password. But we'll have to take Spicer's word for it since his alternative facts are all we're going to get for the coming four years, or until he burns out and quits, or until KellyAnne Conway gets him fired so she can take over.

As CNet puts it, "Here we are. Even those who are tweeting serious things -- especially working for government -- may have to now analyze more closely any possible interpretations of those tweets."

Spicer says that government agencies, like the DOD and as we hear today the Environmental Protection Agency, are taking action to prevent such inappropriate tweeting in the future. This gag order for social media began with the National Park Service and the Department of the Interior on Inauguration Day, because someone within the NPS began retweeting about size of the crowd at Trump's inauguration being smaller than at Obama's. That then inspired someone in charge of the Badlands National Park account to begin tweeting about climate science on Tuesday, and inspired the creation of this "Alt" account for NPS employees who are clearly pissed off about all this.

This is some modern, Trumpian social media warfare at its finest, and seems perfectly appropriate as we enter a time when the president thinks he can circumvent the established media, and facts, by tweeting whatever he wants to his followers each morning. (Sidebar: Someone started a Twitter account for a half onion in a Ziploc bag just to see if it could get more followers than Trump, and so far it has half a million.)

In related news about civil employees in revolt, This American Life last week spoke to two anonymous workers in the federal government who discussed the "dark arts of civil service," i.e. the various ways that one can slow down orders and approval processes when an administration is doing things one doesn't like. Says one of the women interviewed, "There are definitely some career civil servants [who] will not ever give in. And I think there are some career civil servants [who] will toe the line. But I think the people in government who know how the system works have used these tactics within many administrations."

In other words, civil servants haven't even begun to show what they're capable of when it comes to working under an unpopular president  especially if and when he begins trying to cut programs that some of them have spent their careers working on. The Twitter war is just the only war we'll be able to see them waging.

The James Beard Foundation Awards, a.k.a. the Oscars of Food, don't happen until May. But after getting completely snubbed at the 2016 awards, San Francisco is at least guaranteed to be

Two people were transported to the hospital Tuesday, victims of separate collisions with vehicle drivers that left them injured. In the first case, San Francisco Police Department spokesperson Officer Robert Rueca says that

—
White House Calls Out SF Branch Office Of Dept. Of Defense For 'Inappropriate' Twitter Use
Share this