Pay no attention to the dozen or so people behind that curtain!

A Bloomberg report tells us what we should probably have realized all along, which is that Mark Zuckerberg doesn't operate his personal Facebook page alone, instead employing a group of 12 to carefully manage his posts, photos, and even the comments beneath them. We've come a long way since Myspace Tom, your first "friend" on that platform, who had just one lame picture: Now Zuckerberg is the self-styled Oprah of his own platform, reaching a massive audience of 84,705,400 followers.

Per Bloomberg, it works like this: "A handful of Facebook employees manage communications just for [Zuckerberg], helping write his posts and speeches, while an additional dozen or so delete harassing comments and spam on his page" according to two sources the publication doesn't name. Zuck, they write, even has photographers to tail him as he runs around Beijing or whatever he's up to— and not just any photographers, but a group that includes Charles Ommanney, whose past work covering the refugee crisis for the Washington Post was probably a lot less cushy and way lower paying.

This week, as part of his initiative to visit all the states he hasn't been to and like heal America and stuff, Zuck — or Zuck's team — posted photos of the CEO at a Fort Worth stock show and rodeo. "This actually is my first rodeo," he captioned the photo with the help of god knows how many writers, edits, and focus groups. 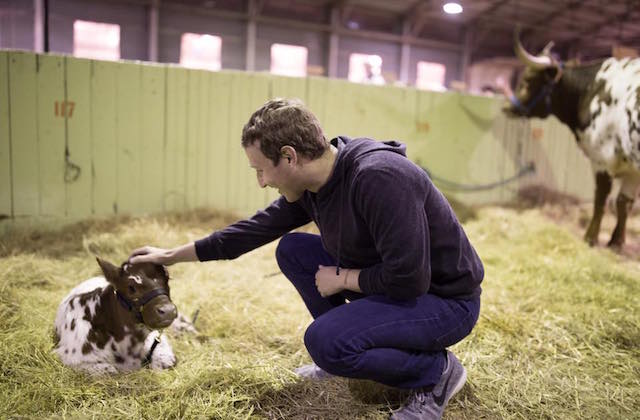 Just a few posts away, Zuckerberg reveals that Facebook's latest data center is being built in Denmark with 100% renewable energy. The juxtaposition is fascinating: It's a mix of the personal and professional that might be odd from just about any other figure. “I don’t know that there are a lot of other business leaders that would find the same level of comfort sharing their personal and business stuff in the way that he does,” director of the University of Southern California Center for Public Relations Fred Cook told Bloomberg. Per that publication, "While plenty of chief executive officers have image managers, the scale of this team is something different. So is its conflation of Zuckerberg’s personal image with that of his company, the diaper-changing photos next to the user growth stats."

Most of Zuckerberg's posts get hundreds of thousands of shares and likes. An extremely staged video of his last big initiative, building an AI "butler" along the lines of Amazon's Alexa or Apple's Siri, garnered a million views, but not without star power, as it featured the voice of Morgan Freeman. Then, there are the soft-focused family photos featuring his wife Priscilla Chan, their daughter Max, and photogenic dog, Beast. Together, the First Family of Facebook provides PR opportunities, demos the company's products, and humanizes its brand.

Whether or not Zuckerberg is really considering a run for elected office, as was the subject of some speculation a few weeks back, the CEO is approaching public life with the polish of a political figure. Who knows what's next for Zuck: His next dedicated Facebook team might even start rooting out Fake News on the platform instead of just asking users like you and me to do it. Can't wait to see!

Related: Is Mark Zuckerberg Maybe Planning To Run For President

Men who crave the experience of a strip club without leaving the comfort of their own living room — or more likely, basement or cave — you're in luck! The Gold Club has partnered with

The Oakland Raiders could become the Las Vegas Raiders in the not too distant future if the NFL agrees to let them move, and the team has just officially filed the paperwork seeking