Lotfi Mansouri, when he ran SF Opera, had persistently tried to convince MTT to conduct an opera there. It never happened. To hear MTT leading vocal works in SF, we had to settle for semi-staged versions on the stage of Davies Symphony Hall, and those left us with a tinge of disappointment: amazing orchestral and vocal displays, but why settle for semi-done things? Why not go full throttle with the real thing, and hop in that darn pit? Last night, MTT took a different tack, and prefixed that "semi" to something that was never meant to be staged in the first place, Mahler's das klagende Lied. From a composer who, despite having led the Vienna State Opera and the Metropolitan Opera in New York, never wrote a full opera.

Das klagende Lied is an hour-long cantata with four soloists, chorus and full scale orchestra and it does tell a rather dark story, but without assigning specific roles to any of the singer on stages. The story goes: two brothers go in the forest to find a red flower that will win them the beautiful queen in marriage. One finds it, the other kills him and takes the flower; later, a minstrel finds a white bone in the forest, carves a flute out of it, which when played, sings the tale of the slayed kid, and reveals to the queen that her now-king betrayed her and killed her promised. There is no: tenor is good brother, baritone is bad, soprano is the queen; they all take turns telling the tale, with interjections from the chorus throughout. The staging added a quartet of dancers to therefore take turns inhabiting the protagonists, and highlighting the twist and turns in the music. Projections on a wall on the back of the stage provided some minimally invasive context, here some tree shadows for the forest, here's some marble for the queen's hall. That wall was opened horizontally in the middle so the chorus could be seen and heard.

Searching whether MTT had ever conducted an opera (he has, just not in SF), we found some remarks of his on the difference between conducting in an opera house versus the symphony hall: "music [speaks] in a wordless language which seemed to fill in all the levels of expression between the words...There is a tremendous joy about the wonderful dialogue between the meaning of the word and the meaning of the music, and the way they can be used to amplify one another’s meanings - or sometimes contradict one another’s meanings in very wonderful and deliciously confusing ways. There is the situation of the opera where you can have not only the words, but you have a rather specific situation which is presented. In any work of art, as you make something more and more specific, you run the danger of making it less and less universal and perhaps more and more - dare one say? - trivial."

Did he make that lied more trivial? Most definitely, the action on the stage did distract from the music, which turned into a soundtrack rather than the backbone. Yet, MTT has a way of defibrillating Mahler's music that just would not let it recede in the background. You could still hear the wondrous textures and colors, the delightful ornamentation. You could still be fascinated by the myriad ways the string would attack a note. At some point, the blend of the basses and bass horns was so intimate we wondered if there was an organ on stage. And both music and projections succeeded in enhancing each other, as in the way the music bloomed as a blur of a red flower grew on the screen. 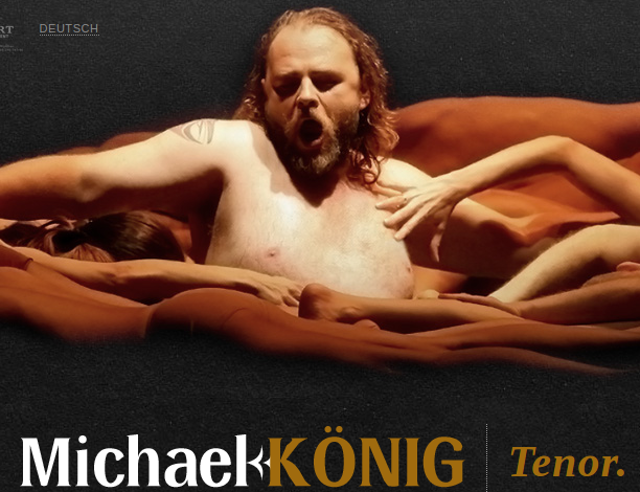 The singers also kept the music at the forefront, despite their physical location all the way in the back (as opposed to the concert version where they would be in the front, holding scores). Their movements were pretty limited, pretty much some smoothly enhanced park-and-bark, as the dancer did all the mimicking. All of them (soprano Joelle Harvey, mezzo Sasha Cooke, baritone Brian Mulligan, the chorus of course) were impressive, but tenor Michael König blew us away, with a final exhalation of an aching tenderness, gift wrapped to take home with us and cherish.

The rest of the program comprised other early works of Mahler that showed how accomplished he was in his late teens, early twenties. Blumine, a symphonic movement describing by its composer as a "love episode" and a "youthfull folly" opened the evening. We didn't hear much youthfulness in MTT's approach, it was pretty slow and slightly depressing, until a little waltzy turn temporarily perked things up. It evoked more the timeless tender love of an aging couple, rather than anything frolicky. Blumine was originally part of some setting of The Trumpeter of Saeckingen, and opens appropriately then with a meandering trumpet melody, by Mark Inouye. Or so we assume based on the quality of the sound. We could not really see, as the orchestra was set up flat on the stage instead of the usual raisers, to make room for the platform for das klagende Lied. But only Inouye could take his trumpet sound to the dry cleaner, get it ironed and pressed, and bring it back still wrapped in its plastic sheeting to have it so kinkless and shiny. He held a progressively fading note for so long, we worried about his lungs. Did he have three or four?

The last piece, Songs of the Wayfarer, also featured Sasha Cooke, who gave a technically perfect account that seemed a tad emotionally restrained. She could have gone deeper into it. Her character in this short song cycle is an abandoned lover, but Cooke seemed to decorate the pits of despair with scented candles, patterned tablecloth, and a vase of flowers. We felt more pain from the orchestra's throbbing lament than from her voice. But that's not a knock on her, rather an acknowledgment of the orchestra's sound and MTT's breathtaking conducting last night.

You have to like tenor's Michael König's choice of illustration for his web page.

Following a report out of Marin County last week about a 48-year-old man who died from meningitis, there's another case report here in San Francisco. ABC 7 reports that 53-year-old Laura Robson was