The weekend's big winter storm was not, as many of your friends scoffed on social media, the "Biblical" rain or "biggest storm of the quarter century" that had been sensationally predicted by some newscasters, but it did bring down a lot of trees onto roadways, houses, cars, and people, and make for some hairy driving for many. Flooding appears to have been not so severe in various flood-prone areas, with the exception of Guerneville and the lower Russian River Valley where waters are set to peak at noon Monday and damages won't be assessed until tomorrow at the earliest  and where many people already evacuated Sunday night.

As the Santa Rosa Press-Democrat tells us, the most rainfall recorded from the storm in any Bay Area location appears to have been at a weather station near Healdsburg in Venado, where nearly 12 inches of rain fell in a 48-hour period, beating out most areas that received less than half that (nearby Santa Rosa got just 3.45 inches, and San Francisco got just over 2 inches as of 7 p.m. Sunday).

Storm winds took down some scaffolding along the side of the seven-story hotel in the process of being renovated at 7th and Market Streets, between Market and McAllister. Homeless man Jose Perez tells the Chronicle about being underneath the collapse with several friends, who count themselves lucky because they were protected by the bus shelter they were huddled in.

Trees were reported down all over the Bay Area, including one that tragically killed a woman in San Ramon Sunday morning who has since been identified as 56-year-old Deborah McKeown. Other trees like the one pictured above that collapsed onto Highway 280 in Millbrae and one that blocked part of Highway 17 between San Jose and Santa Cruz caused some significant traffic problems for many.

A fallen tree in the Sunnydale public housing complex on Brookdale Avenue in San Francisco has displaced seven people, as the Chronicle reports, and you can see photos of that here and here. The large tree appears to have wobbled in the wind and become uprooted by combination of wind and wet ground, leading to the red-tagging of the residential building it crashed onto.

An SFist reader sent the photos below of trees fallen along Edgehill Mountain, between St. Francis Wood and Forest Hill, several of which totaled a couple of cars  including the reader's mother's. 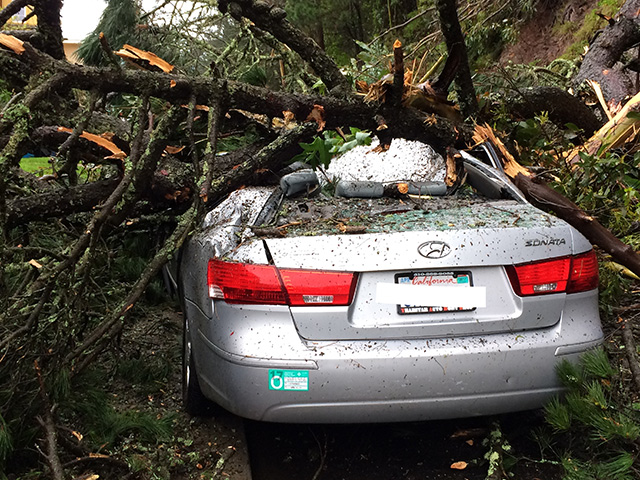 As the Chronicle further reports, residents of a mobile home park in Novato were briefly stranded when their road was flooded, and much of the reported flooding around the Bay Area and out in Yosemite was "more of the nuisance variety."

Up in downtown Napa, recently installed flood controls appear to have been effective in keeping water out of the streets as the Napa River crested on Sunday. Elsewhere, though, there was a fair amount of flooding that closed down local roads up north.

#NapaRiver about to crest in Yountville. Yountville Cross road is closed due to #flooding pic.twitter.com/iTA6j0L9D3

One of the biggest and most widespread impacts of the storm may have been isolated power outages. Nearly a half million PG&E customers lost power at some point over the weekend, with 240,000 of those in the Bay Area on Sunday, according to KQED. 17,000 Bay Area people were still without power as of Sunday evening, and that included a swath of the Mission District around 20th Street. In total, about 5,400 SF residents were without power at some point on Sunday.

Power is out at my place in the mission. This changes my morning plans a bit

@PGE4Me power completely out here in the Mission (near 20th and Bryant). Any ETA on when it'll be back on?

Meanwhile, a homeless man who had been sleeping in Golden Gate Park near the Beach Chalet had to be rescued Sunday after a tree toppled and trapped him beneath it. As CBS 5 reports, a gardener walking through around 6:30 a.m. heard the man's cries for help, and SFFD rescuers were able to come to his aid. He was uninjured, but was taken to the hospital to be treated for hypothermia.

A popular California sightseeing destination in Calaveras Big Trees State Park has been destroyed. The Pioneer Cabin Tree, a giant sequoia whose trunk was hollowed out in the 1880s for the novelty of

The condition of a man shot by officers with the San Francisco Police Department Friday has worsened over the weekend, as the union that represents officers and the commission that oversees them fight

—
Storm Topples Trees, Scaffolding, Leaves Part Of Mission In The Dark (But Otherwise Wasn't So Bad)
Share this