The selection of a new SFPD Chief was not, Mayor Lee assured a packed City Hall press conference this morning, a choice between "insider and outsider," but instead a measured decision based on the proven skill set of 27-year Los Angeles Police Department veteran William "Bill" Scott. Nevertheless, Scott, who has served most of his career in operations and had achieved the rank of South Bureau Deputy Chief, alluded to the "fresh eyes" with which he will view the department, vowing change and progress to local policing in the wake of a Department of Justice review process prompted by the SFPD shootings of black and brown San Franciscans.

Scott will succeed Interim Chief Toney Chaplin, whose service the Mayor praised. Chaplin, considered the likely "insider" choice for the job, was on hand during the announcement. "Toney stepped up and led our department with grace and integrity," said Lee. "The San Francisco Police Department is better today than when he took the role as acting chief." Later, Lee added of his decision between Chaplin and Scott that "My natural inclination is to look from within. I had to discipline myself to the DOJ report and the independent assessment that was made about how we could be better as a department and as a city."

Introducing himself, Scott, an Alabama native and graduate of the University of Alabama, emphasized the collective rather than the personal. "I have a rule that usually when I speak in public I try to limit the word 'I' from speech, because really, the work we need to do is about 'we.'" Making an exception, Scott introduced his family, who were present, his two sons and his wife, with the exception of his daughter, who was unable to attend. "When my wife and I got married, and we talked about the places we wanted to live, the number one on my list was the city of San Francisco," Scott said, drawing applause. Coincidentally, yesterday marked the couple's 29th anniversary. 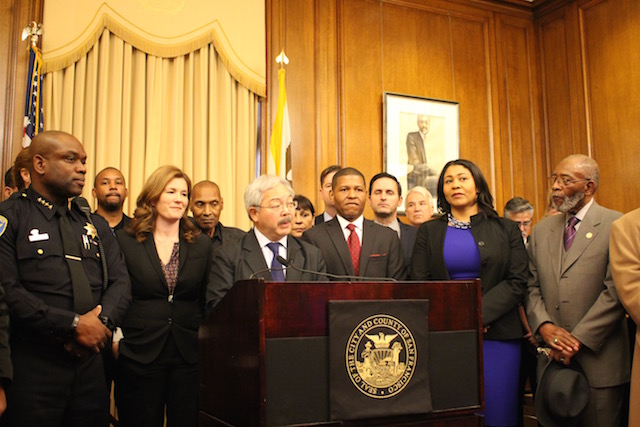 Of himself, Scott said that "What you will find in me, I hope, is the person I've been all my life, a person that will listen to you, will be fair, will take action, and be persistent." Scott revealed that he'd been contacted regarding the opportunity by a recruiting firm. "I wasn't looking for a job, I was really happy in LAPD, but it's funny how God works," he said, drawing nods of approval from the many African American faith leaders present at the conference and who had weighed in on the selection process. "I've always been a person to put myself in the position, when the opportunity comes, to take advantage of it," he said.

Alluding to the nearly year-long selection process, "Uncertainty around who your leader is, is difficult," said Police Commission President Suzy Loftus. "Chief Chaplin was extraordinary, laid the groundwork, and now, here we are. We want to address the deficiencies that we know are there, and we can rebuild trust between us and the community." 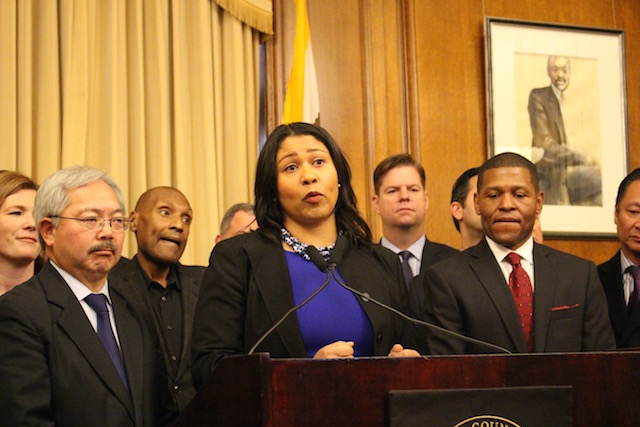 Fielding a question regarding the difficulty outsider police officials face when transplanted to the clubby San Francisco Police Department atmosphere, Scott drew on his own experience with outsider superiors while serving in the LAPD. "I've experience that twice with an outside chief coming in to LAPD," he said. "One thing you have to understand about police officers, you care who your chief is, but you mostly care about, are you getting the support you need to do your job?"

In particular, Scott praised former LAPD Chief Bill Bratton, who entered that department from the NYPD and the Boston Police Department before it. "I rose through the ranks when [Bratton] was there. He appointed me to captain. What worked for me was a chief who made me believe I had what I needed to get the job done."

The first entry point for The Speakeasy is Jack Kerouac Alley, the narrow walking street between Vesuvio and City Lights Books named for an American writer who was himself born too late to

The families of three of the people killed in the mass shooting at Pulse nightclub in Orlando in June  Tevin Eugene Crosby, Juan Guerrero, and Javier Jorge-Reyes  filed suit this week in federal

—
As Outsider, New SFPD Chief Bill Scott Will Have 'Fresh Eyes'
Share this